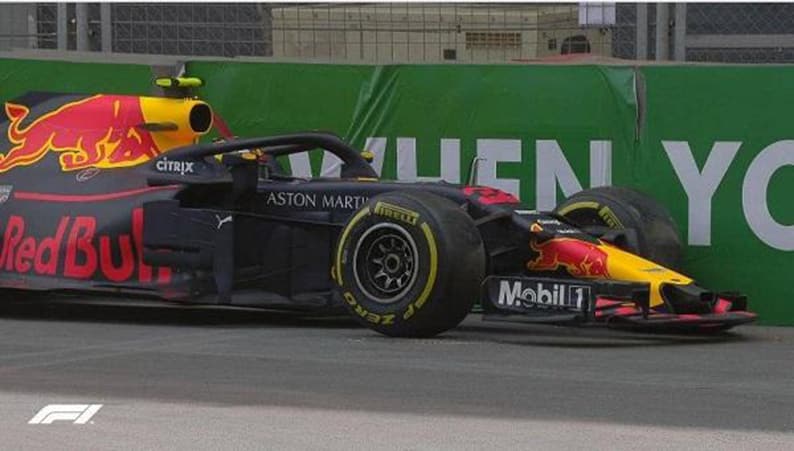 Formula One stewards said both men, who had been running fourth and fifth, shared the blame

Max Verstappen and Daniel Ricciardo wrecked Red Bull’s Azerbaijan Grand Prix hopes on Sunday by putting each other out of the race with a collision that angered and dismayed team boss Christian Horner.

Formula One stewards said both men, who had been running fourth and fifth, shared the blame and issued them with reprimands.

Australian Ricciardo, race winner in China two weekends ago and in Baku last year, smashed into the back of his 20-year-old Dutch team mate’s car while attempting to overtake on the 40th of 51 laps.

The incident, which had looked more and more likely as the pair went wheel-to-wheel and passed and re-passed over the previous laps, brought out the safety car for the second time in the race.

“I have watched a few replays and the only thing we can both say is sorry to the team. This is the last thing we wanted,” said Ricciardo.

“This was the worst case scenario and everyone is pretty heartbroken.”

Verstappen, who has had an accident-packed season so far, said both would make sure it did not happen again.

“I don’t think not letting us race anymore is the way forward but of course we will talk this over as a team and learn from it,” he added.

“If you move on him all the time, where does the poor guy have to go?,” the Austrian told reporters.

Lauda added that, in Horner’s shoes, he would “go home and cry” and then summon the pair to his office to tell them how much less they would get paid for the damage done.

Red Bull have been in such a situation before — most notably in Turkey in 2010 when Australian Mark Webber and Germany’s Sebastian Vettel collided when set for a one-two finish.

Horner said it was a racing accident, and he wanted to continue allowing the current pair to race freely, but they had to recognise that making contact was “unacceptable”.

“Unfortunately today has resulted in the worst possible scenario where you’ve had both drivers make contact and retire from the grand prix, which is enormously disappointing.

“There’s no blame apportioned more in one direction to the other, they are both equally responsible,” he said, adding that the drivers had been urged before the race to allow each other space.

“What is obviously annoying is that we’ve given away an awfully large amount of points today so both drivers will be apologising to all the members of staff that work so hard to put these cars together.”

More mosaics from Kankaria have been located

Cyprus cinema: a work in progress