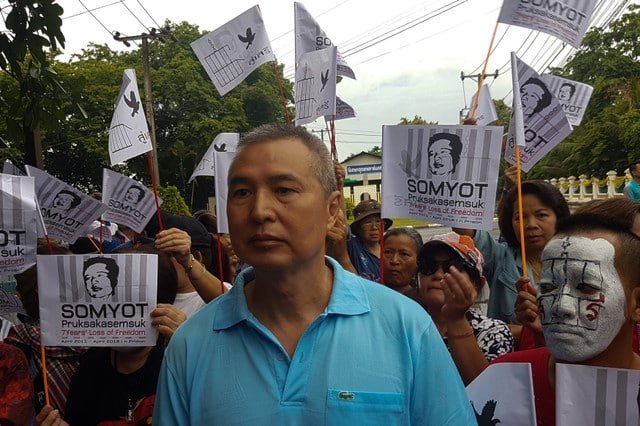 Somyot Prueksakasemsuk, 56, a high-profile Thai activist and former magazine editor jailed for insulting the country's monarchy, stands next to his supporters after his release from a Bangkok prison in Thailand

A high-profile Thai activist and former magazine editor jailed for insulting the country’s monarchy vowed on Monday to keep pressing his call for democracy after he was released from prison.

“Calling for democracy, especially elections, is good,” Somyot Prueksakasemsuk, 56, told reporters outside the jail, where about 100 supporters greeted him on his release.

“I will use my rights as a Thai citizen to join this movement and I invite people to support calls for an election as soon as possible.”

Since the start of the year, there have been sporadic, student-led street protests calling for an election and for the military government to step down.

“I ask the government not to use trickery to postpone the election again, because this will not be good for the economy and other sectors of the country,” Somyot added.

Somyot, who was the editor of a political magazine, Voice of Taksin, had been jailed in 2013 for 10 years under Thailand‘s lese-majeste law, but the Supreme Court reduced his sentence in 2017.

“Being in prison is a form of unhappiness and torture,” Somyot said.

The junta’s top legal adviser warned Somyot not to break the law.

“If he gets involved in political activities and violates the law … then we have to proceed with legal action against him,” Colonel Burin Tongprapai told Reuters.

Since its 2014 coup, the junta, known officially as the National Council for Peace and order, has vowed to take a hard line against those critical of the monarchy and the courts have handed down record sentences for royal insults.

It criminalizes all perceived insults of the monarchy and prescribes jail terms of up to 15 years for each count of offending the king, queen, heir or regent, although it has also been interpreted to extend to dead kings.

Known as section 112 of the criminal code, it has drawn condemnation from the United Nations and rights groups who say accusers often abuse it for political gain.

The law limits what all news organisations, including Reuters, can report from Thailand.

Cyprus cinema: a work in progress