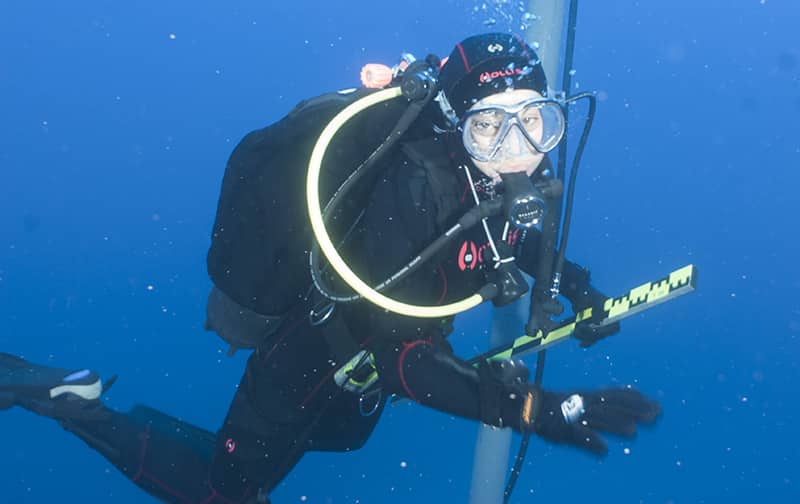 You’ve been to the Tombs of the Kings, right? Probably the House of Dionysos too. You’ll have heard of the dig at Ancient Idalion (today’s Dali) which has been ongoing for decades. And you’ve definitely passed by Chirokitia, even if you haven’t made it up the hill…

Yes, Cyprus is a hotbed of archaeological activity. Everywhere you go, someone’s digging away, discovering treasures from the island’s past. Practically no municipal project has ever reached completion without some unique artefact indefinitely halting progress. But there’s one area where Cyprus’ past has remained relatively untouched. And this, says Anna Demetriou, is because we just haven’t had the resources…

Until now, maritime archaeology in Cyprus has lagged far behind its land-based cousin. “We didn’t have the resources, the people who knew how to dive, the money. Only now are these factors coming into play,” Anna reveals. A former employee of both the Thetis Foundation (a non-profit NGO which supports maritime archaeological research in Cyprus) and MARELab (the University of Nicosia’s newly-formed Maritime Archaeological Research Laboratory, under the direction of renowned maritime archaeologist Dr Stella Demesticha), Anna is currently completing her PhD on ‘Ancient shipwrecks in Cyprus: tracing their biographies in the present’.

As such, she’s well-placed to discuss the island’s seafaring past: the cargoes and shipwrecks which have lain hidden for years on the seafloor, the harbours and ports which have been in use since antiquity, and how these discoveries of the past can inform our present. Because, lack of resources aside, our absence of gills and the mobility of ships in comparison to communities mean it’s no surprise that there’s simply oodles of stuff out there just waiting to be discovered…

It may be a cliché that Cyprus is at the crossroads of three continents, but that’s exactly what makes it a potential hotbed of maritime discovery. “As the only big island in the Levant, seafarers of the past were forced to either put into port here or sail close by the island,” Anna discloses. “There are shipwrecks along the seabed of the eastern Mediterranean from as far back as the Bronze Age which show us our connection to the sea: from what they carried as cargo, we can work out which vessels came from, or stopped by Cyprus.

While the Kyrenia is perhaps the best-known vessel to have been discovered, two others have given us much information on the island’s maritime past. The Mazotos shipwreck, a well-preserved late classical shipwreck from circa 400BC located 1.5 nautical miles off the southern coast, has provided archaeologists with invaluable data on trade routes, destinations and crew, while the Nissia shipwreck (which dates from around the late Ottoman period, and lies 500 metres off the coast of Paralimni) is hypothesised to have been a merchant ship carrying an organic cargo.

“People think maritime archaeologists spend their lives diving down to the sea floor and finding amphorae full of gold!” laughs Anna. “But while we do, predominantly, discover amphorae, they tend to contain either sand or olive pits! Nevertheless, this gives us valuable information about what people ate, where the vessels were made, and the relations amongst various cultures.” And, occasionally, a particularly exciting artefact comes to light: “At the Nissia wreck we discovered a comb made of bone, and the Mazotos turned up a pot engraved with a small ‘p’, probably in reference to its owner. While these may not seem life-changing discoveries,” Anna adds, “they do give us huge insight into the seafarers of the past and – even more thrillingly – this type of find does make you feel connected to history. You feel you’re somehow communicating with those who lived sometimes thousands of years in the past.”

Dispelling another myth, Anna moves from the artefacts to wrecks themselves, which are often discovered by fishermen and recreational divers. “It’s not like maritime archaeologists are jumping into their wetsuits and heading out to sea, wondering what amazing thing they’re going to discover today!” she laughs. “Generally we’re notified of potential discoveries, and then spend a long time planning and preparing for fieldwork. We’re out in the water for less than two months of the year; much of our time is spent organising our fieldwork. Excavating underwater is much harder than on land,” she continues. “You need more money, you need the correct paperwork, people and infrastructure.”

Even then, she adds, there’s lots of organising and analysing the data, writing reports, studying the artefacts, and preparing publications.

However, those two months of underwater excavation are, she reveals, worth the preparation. “It’s an aspect of our culture that hasn’t been much studied, but these wrecks comprise a sort of hidden history, a time capsule in effect. To dive down and find artefacts from the past, and then either – depending on the dictates of National Antiquities protocol – bring them to the surface or leave them in situ for further study, is very fulfilling. You’re discovering the bones of the past, and that lends an understanding of one’s culture and present existence.”

While a few foreign maritime archaeology teams are studying sites at places such as Akrotiri Bay, Tochni and Paralimni and several students are currently doing their master’s in related subjects both here and abroad, the field is still relatively new to Cyprus, and there’s an underwater wealth of artefacts out there just waiting to be discovered… “As an island, the sea is integral to our history and culture, so this area of study is very rewarding,” Anna concludes. “It’s a new field for us and, as we gradually develop a local team, it feels very exciting to be at the forefront of maritime archaeology in Cyprus. A field that, so far, hasn’t been studied that much, but promises invaluable rewards in the future…”

For more information on maritime archaeology in Cyprus, contact MARELab on 22 893568 or visit www.ucy.ac.cy/marelab