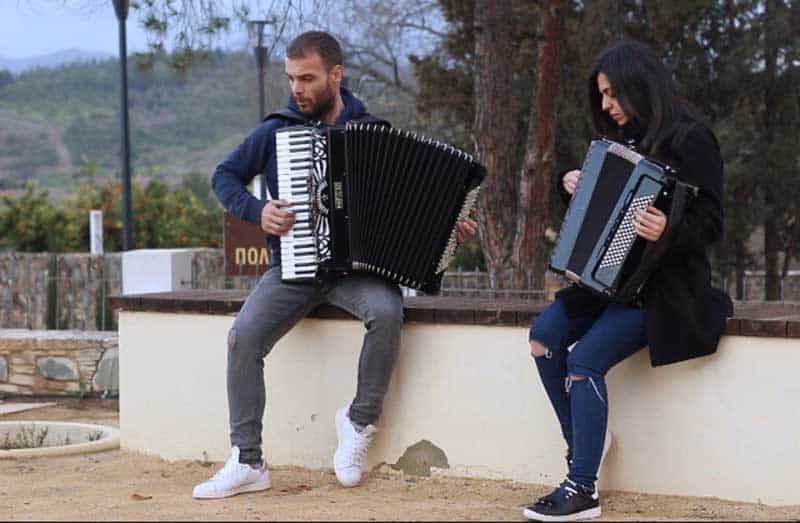 It’s a pretty divisive instrument. Fans love it for its versatility, detractors curse its reedy pervasiveness. But there’s no getting away from the fact that the accordion is a ubiquitous piece of kit for the travelling musician, found wherever communities gather for a bit of a knees up.

Even, it transpires, in places you would least expect: in China, the sheng (basically a free reed aerophone) has been known since the 2nd millennium BCE; in Africa, the instrument first arrived with 19th century European sailors, merchants and settlers, and was carried inland by migrant workers. Today, Castelfidardo in Italy is the preeminent centre of manufacture, with more than nine major accordion producers based in the area. But Pera Oreinis could give the place a run for its money – if not in terms of production, then certainly in numbers of accordions accrued. Because, this week, the village will be hosting The Cyprus Accordion Festival – the first of its kind on the island…

The goal of the festival is, according to organisers, twofold: to create awareness and the education of “people all over Cyprus, of all ages, about the wonderful Musical Instrument of Accordion”; and to promote the host village. “Through the various seminars and concerts,” say organisers, “all attendees and participants will have the opportunity to come into contact with the history, the music and in general the instrument of Accordion, giving them the opportunity to learn and listen to Accordion Music by the very best in the field. The future goal of the festival is to attract even more visitors and participants from all over Cyprus and abroad. The festival” – which, incidentally, takes place under the auspices of Cultural Services of Ministry of Education – “will be held in the village of Pera Oreinis, giving people the opportunity to visit and to learn about this beautiful village in Cyprus.”

The two organisers are inordinately fond of the instrument (musician, conductor and teacher Cleopatra Charalambous being the co-creator of the ‘first Accordion Band in Cyprus since 2015’, while fellow co-creator Angelos Doukas is a musician, composer and professional pianist and accordionist) and have designed a suitably impressive line-up for the three days of the festival. Workshops, seminars and concerts abound, with plenty of random activities and educational events for the younger visitors making this an event for any musical family.

On Friday, we’ve got everything from an Open Accordion Exhibition & Technical Support at the village cultural centre – TLC for your instrument, as it were – to an Interactive Musical Theatre for children, featuring Leon the Accordion. The First Accordion Band of Cyprus will, of course, be there in force: entertaining the troops from the central stage in the village square. And they’ll be sharing the opening day’s limelight with the Leipzig Akkordeon Ensemble and, later in the evening, with more local group Parapera.

The following two days see more of the same: seminars on subjects such as Accordion in Greek Traditional Music; concerts (including the Young Volunteer Choir featuring the Windcraft Kids’ Band and DJ Vassilis Palamas – though not, alas, simultaneously!); and the rather daring Learn about the Harmonica workshop for those who conceive of a life beyond the accordion. There’s also a live performance on the third day which will see all the workshop attendees performing live in the village streets – a sort of wandering minstrel event with groups popping out of alleyways to delight and surprise. And the entire three-day event will culminate in a village square showcase which includes both the Bellw Epoque Music Band and our original First Accordion Band of Cyprus.

Now, if your fingers are a-twitch at the thought of three full days of merry music-making and musical merry-making, accommodation is easily arranged. While Aperanti Agrotourism have pitched in with special prices on their local rooms, a free campsite will be set up next to the square throughout the event – showers and loos will be provided, though potential campers are advised to Bring Your Own Tent.

All in all, the festival seems a rather splendid celebration of an oft-overlooked instrument. And of village life in general. Expect to see more than the usual amount of fulsome moustaches, assume you’re going to hear a few jolly tunes, and envisage a long weekend of surprising moments and you’ve probably got Cyprus’ first Accordion Festival in one!

Cyprus’ First Accordion Festival
In Pera Oreinis from May 4 to 6. For more information call 99 171 752, email [email protected], or visit cyprusaccordionfestival.com

Cyprus is a hotbed of maritime history