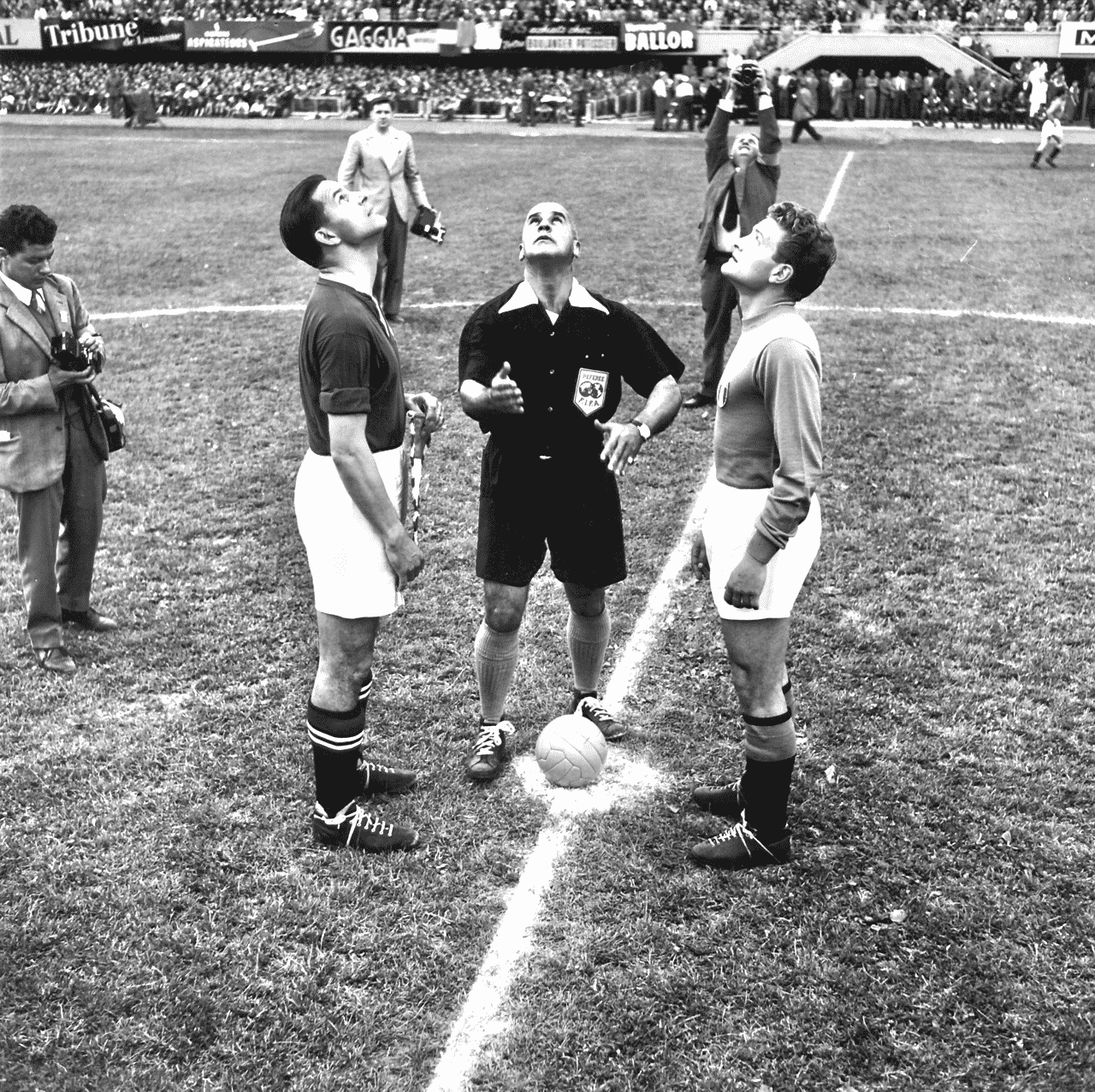 The captains of Switzerland and Italy Bocquet and Bonipetri respectively

Switzerland was chosen as host nation for the 1954 edition of the tournament to mark the 50th anniversary of Swiss-based FIFA’s formation.

World football’s governing body also changed the format, going back to a group stage and knockout system featuring 16 teams. They were divided into four groups with two teams in each group seeded.

Strangely, the two seeded teams did not play one another in the group and extra time was needed if the scores were level after 90 minutes.

Limited television coverage was available for the first time at a World Cup.

On the pitch, Hungary were the best team in the world. The ‘Magnificent Magyars’ were Olympic champions and entered the tournament riding a 32-game unbeaten run.

Uruguay were also a force to be reckoned with, having never previously lost a match at the World Cup finals.

The quarter-final clash between Switzerland and Austria saw Austria beat the hosts 7-5, setting a record which still stands today, for the most goals scored in a World Cup match.

The tournament itself holds the record for the highest goals per game average- 140 goals scored in 26 matches.

Also remembered is the ‘Battle of Berne’, where Hungary beat Brazil 4-2 in a game described as one of the most brutal ever, featuring three red cards and fighting after the final whistle.

The 1954 final, known as the ‘Miracle of Bern’, saw one of the greatest upsets in World Cup history.

Talismanic captain Puskas, nicknamed the ‘Galloping Major’ because of his role in the Hungarian army and who has since gone down in history as one of the greatest players of all time, was not fully fit however.

Hungary, who had not been beaten in four years, lived up to their billing early on and were 2-0 up inside 10 minutes against a team that they had beaten 8-3 barely two weeks earlier, with Puskas and Zoltan Czibor scoring.

There were no further goals until six minutes from time when Rahm scored the winner for West Germany, giving them the first of their four World Cup titles (as West Germany in 1954, 1974, and 1990, as Germany in 2014).

In the pouring rain Jules Rimet, the retiring FIFA President, gave the trophy which had been destined for Puskas to Fritz Walter.

The unexpected victory evoked a wave of euphoria throughout Germany, which suffered from a lack of international recognition in the aftermath of World War II, and where expressions of national pride were still tainted with the recent past.