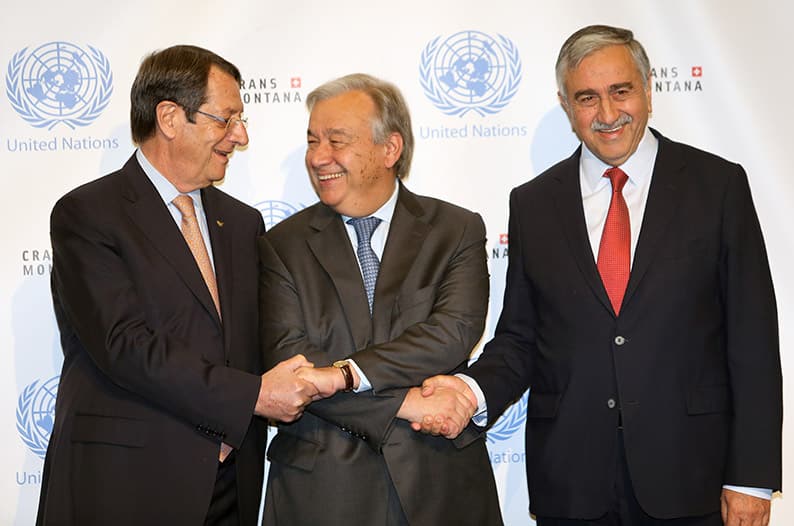 Turkey said Thursday a federal solution cannot be achieved in Cyprus because of the Greek Cypriot side’s mentality as the debate over the interpretation of a proposal by the Turkish Cypriot leader raged on.

“A federal solution cannot be achieved with the Greek Cypriots’ mentality,” Turkish Foreign Ministry spokesman Hami Aksoy said. “We now believe that a new path should be tried.”

Aksoy said the talks have been going on for 50 years without progress and Turkey was not prepared to play the same game.

“As long as there is no change of mentality in the Greek Cypriot side we do not intend to play the same game,” Aksoy said.

His statements, implying that a new kind of solution should be sought, came amid reports that during a recent visit to Cyprus, Turkish Foreign Minister Mevlut Cavusoglu had proposed to the Turkish Cypriots to put confederation or a two-state solution on the table.

It was reported at the time that Turkish Cypriot leader Mustafa Akinci rejected the suggestion.

Akinci on Monday had called on Anastasiades to accept as a “strategic package” without any alterations, the framework drawn up by UN Secretary-General Antonio Guterres in Crans Montana, Switzerland, just days before the negotiations collapsed last July.

But the Turkish Cypriot leader’s overture became bogged down in which version of the proposals put forward in Switzerland last year the two sides were willing to discuss.

Instead of accepting the proposal, Anastasiades asked whether Akinci accepted the framework, “as it was finalised on July 4, 2017”.

Anastasiades was referring to changes to the framework suggested by himself on July 4, but not accepted by the Turkish side or adopted by the UN secretary-general.

On Thursday, Akinci said he had confirmed the contents of the document point by point, during a meeting with UN Secretary-General Antonio Guterres in New York in September last year.

“What I have conveyed is the document put before us at Crans Montana and we accepted. If they are ready to announce, declare, this as a strategic package please do so,” he said.

Since making the proposal on Monday, Akinci came under fire from various parties in the north; he urged them to settle down because the final decision would be the people’s.

“I only look at the interests of the Turks of Cyprus,” he said.

One of those was the breakaway state’s ‘foreign minister’ Kudret Ozersay who said he did not know Akinci would make such a statement.

Ozersay said the Guterres framework contained a lot of ambiguities and everyone interpreted it according to their view.

Greek Cypriot negotiator Andreas Mavroyiannis said the two leaders had a different approach on all six points of the framework.

“At this moment we are trying to understand what the new element is,” he told state radio on Wednesday morning. “We haven’t figured it out yet.”

He said he did not know what Akinci was trying to say but the Greek Cypriot side wants to resume talks from where they ended in July last year.

“They were interrupted because it was impossible to agree on security issues – guarantees mainly, because Mr. Cavusoglu rejected what the UNSG wanted to record,” Mavroyiannis said.

The UNSG spoke about the six points, but he didn’t have time to record them because of Cavusolglu’s reaction, the negotiator said.

“But he managed to say that it was necessary to scrap guarantees immediately.”

Mavroyiannis said the document was neither a bible nor could Greek Cypriots accept it as is.

“It was up for negotiation. In this way, the UNSG simply put the whole package on the table.”

Akinci said on Wednesday that the Guterres framework as it was presented on June 30 did not concern just security and guarantees but also political equality, land, and property.

He added that the secretary-general had put the framework together thinking it could be used as a way out and that it was not up for negotiation. If these principles are accepted by the Greek Cypriot side, he said, “I am ready to accept it”.

Akinci said that the rotating presidency is clearly stated in the Guterres document, adding that there is also a reference to effective participation in decision-making.

Mavroyiannis said it was a fact that as part of a comprehensive package that would include all points, like scrapping guarantees, the drastic reduction of Turkish troops to 650 and a sunset clause for them to also leave, and territorial concessions, President Nicos Anastasiades would be prepared to accept rotating presidency with a 2:1 ratio provided there are dispute resolution mechanisms, clear definition of authority, common ticket, cross voting, and so on.

US teen praised in China for wearing traditional dress