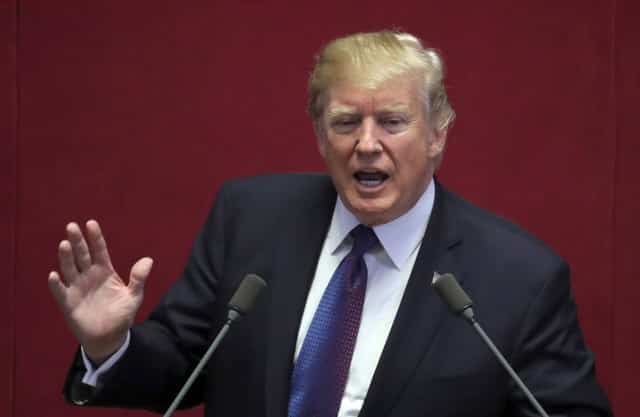 President Donald Trump, who briefly pledged to “fight” the National Rifle Association after a February mass shooting at a Florida high school, is expected to throw his full weight behind the powerful gun rights group on Friday at an event in Dallas.

This will be Trump‘s fourth speech to the powerful NRA and, with control of the US  Congress up for grabs in November’s midterm elections and campaigns under way, it is expected to include familiar warnings meant to excite the Republican voter base.

Days after the shooting, Trump promised action on gun regulation and at a gathering of state officials, said this of the NRA: “We have to fight them every once in a while.”

Since then, no major new federal gun controls have been imposed, although the administration is pursuing a proposed regulatory ban on bump stocks of the sort used in an October 2017 mass shooting in Las Vegas that killed 59 people.

A bump stock allows a semi-automatic rifle to fire like an automatic one. Semi-automatic assault rifles are sold widely in the United States, which has the world’s highest per capita gun ownership rates. The NRA has fiercely defended America’s gun ownership rights for many years, citing the Second Amendment.

Since Parkland, Trump has largely moved his rhetoric back in line with the NRA, which endorsed him in his 2016 presidential election campaign and gave him its financial backing.

The group’s convention in Texas will attract a strongly pro-Trump crowd, officials said, giving the president room to take some swipes at his opponents, review his record in office and complain about Special Counsel Robert Mueller’s investigation of possible collusion between Trump‘s 2016 campaign and Russia.

The event was likely to be “reminiscent of rallies past,” a second White House official said.

A Reuters/Ipsos poll found in March 2018 that 54 per cent of adults wanted “strong regulations or restrictions” for firearms. That was up from 39 per cent in a similar poll from April 2012.

Among Republicans in the poll, 40 per cent wanted strong regulations or restrictions in March 2018, up from 22 percent in April 2012.

Trump met with NRA officials privately at the White House twice in February as he mulled policy responses to the shooting. He eventually endorsed an NRA proposal to arm teachers, a step the group said would help prevent mass school shootings. Gun control activists generally oppose that idea.

Trump initially expressed enthusiasm for measures to close loopholes for gun buyers seeking to avoid the background check system, raise the age limit for buying rifles, and find ways to seize guns temporarily from people reported to be dangerous.

He has since endorsed more modest proposals, such as legislation aimed at providing more data for the background check system. He did not endorse closing a loophole in existing law that would require background checks for guns bought at guns shows or sales arranged over the internet.

The first ever BMW X2 Dare to Be Different