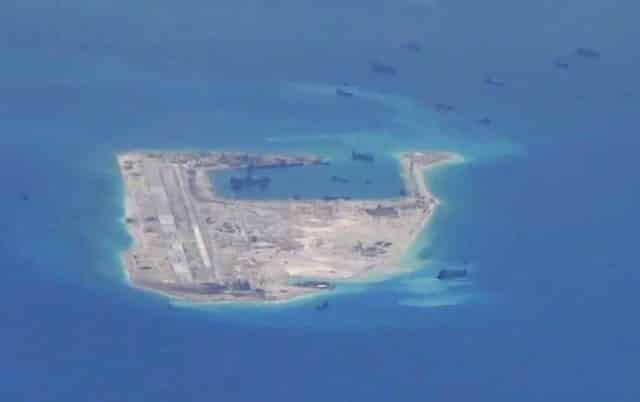 The United States has raised concerns with China about its latest militarization of the South China Sea and there will be near-term and long-term consequences, the White House said on Thursday.

US news network CNBC reported on Wednesday that China had installed anti-ship cruise missiles and surface-to-air missile systems on three manmade outposts in the South China Sea. It cited sources with direct knowledge of US intelligence.

Asked about the report, White House spokeswoman Sarah Sanders told a regular news briefing: “We’re well aware of China’s militarisation of the South China Sea. We’ve raised concerns directly with the Chinese about this and there will be near-term and long-term consequences.”

Sanders did not say what the consequences might be.

A US official, speaking on condition of anonymity, said US intelligence had seen some signs that China had moved some weapons systems to its artificial islands in the Spratly archipelago in the past month or so, but offered no details.

CNBC quoted unnamed sources as saying that according to US intelligence assessments, the missiles were moved to the Spratlys within the past 30 days to Fiery Cross Reef, Subi Reef and also Mischief Reef, which is 216 km (135 miles) from the Philippines, well within Manila’s Exclusive Economic Zone.

They would be the first Chinese missile deployments in the Spratlys, where Vietnam, the Philippines, Malaysia and Brunei have rival claims.

China‘s defence ministry did not respond to a request for comment. Its foreign ministry said China has irrefutable sovereignty over the Spratlys and that necessary defensive deployments were for national security needs and not aimed at any country.

“Those who do not intend to be aggressive have no need to be worried or scared,” ministry spokeswoman Hua Chunying said.

Close US ally the Philippines, which is now pursuing strong ties with its historic rival China, gave a cautious response on Friday to the reported deployment.

“With our recently developed close relationship and friendship with China, we are confident that those missiles are not directed at us,” said Harry Roque, spokesmen for President Rodrigo Duterte.

“Be that as it may, we would explore all diplomatic means to address this issue.”

Julie Bishop, the foreign minister of US ally Australia, said the report, if accurate, would be a concern as the actions would be contrary to China‘s stated aspiration not to militarise features it controls.

“China, of course, has a unique responsibility as a permanent member of the Security Council, to uphold peace and security around the world,” Bishop told reporters in Australia.

“Any action to militarize unilaterally features in the South China Sea would go against that responsibility and that role.”

Eric Sayers, a former consultant to the commander of the US Pacific Command, called the missile deployment “a major escalation” and said one immediate US response could be to rescind Beijing’s invitation to this year’s RIMPAC multilateral naval exercises beginning in Hawaii in July.

“When China sees that it can get away with these types of actions with little cost – as they did all through 2015 and 2016 – it only makes it more likely they will keep pressing,” said Sayers, an adjunct fellow at Washington’s Center for Strategic and International Studies.

“China sees its participation in the exercise as a sign of its acceptance among the world’s maritime powers but Beijing should not be allowed to militarise this open maritime domain and still be honoured as a welcomed member of the maritime community.”

Last month, US Admiral Philip Davidson, nominated to head US Pacific Command, said China could use its “forward operating bases” in the South China Sea to challenge the US regional presence and “would easily overwhelm the military forces of any other South China Sea claimants.”