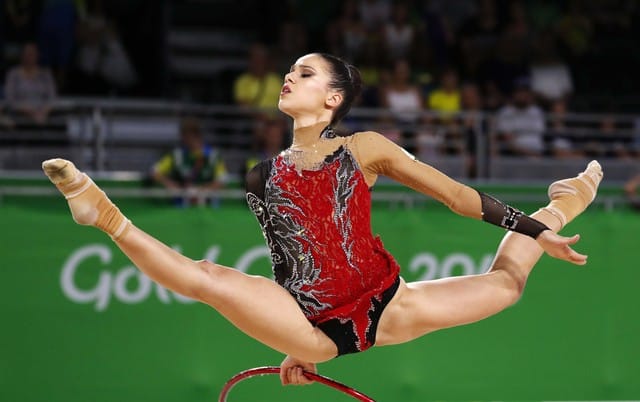 Diamanto Evripidou of Cyprus won six medals – including four gold – in rhythmic gymnastics at the Gold Coast 2018 Commonwealth Games in Australia in April. Evripidou won gold in the ball, hoop, individual all-around and team events, took silver in the ribbon and bronze in clubs.

These accomplishments have placed the 18-year-old on the United States Sports Academy’s Athlete of the Month ballot for April and public voting is in progress. Following the selection committee’s meeting, 12 candidates – six male and six female – from five countries comprise the list.

Each month, the public is invited to participate in the Academy’s worldwide Athlete of the Month programme by nominating athletes and then voting online during the first week of every month.

Everyone is encouraged to cast a vote on the Academy’s website at www.ussa.edu and have friends do the same. The full ballot is listed along with bios of what each athlete accomplished during the month. Voting will continue until 5 p.m. US Central time on Thursday, 10 May 2018.

The Athlete of the Year Award is part of the United States Sports Academy’s Awards of Sport programme, which each year serves as ‘A Tribute to the Artist and the Athlete.’ The Academy presents the awards to pay tribute to those who have made significant contributions to sport, in categories as diverse as the artist and the athlete in several different arenas of sport.

This is the 34th year of the Academy’s Awards of Sport programme.

Founded in 1984, ASAMA is dedicated to the preservation of sports art, history, and literature. The ASAMA collection is composed of more than 1,800 works of sport art across a variety of media, including paintings, sculptures, assemblages, prints and photographs. The museum is open free to the public from 9 a.m. to 4 p.m. weekdays. For more information, go to www.asama.org