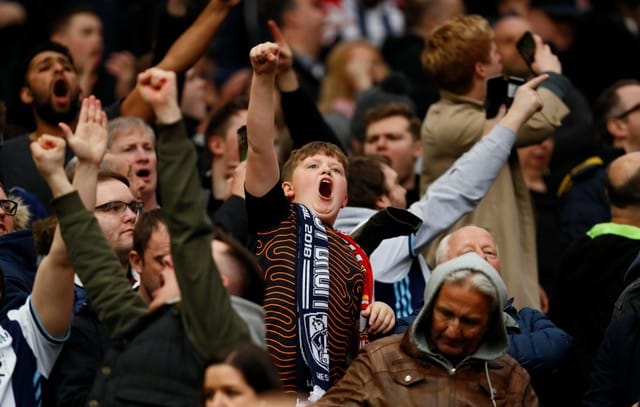 West Bromwich Albion held on to their slim hopes of avoiding relegation after a stoppage-time goal by Jake Livermore gave the Midlands club a lifeline thanks to a 1-0 Premier League home win over Tottenham Hotspur on Saturday.

With one game remaining, West Brom moved up to 19th on 31 points from 37 matches, one behind Southampton and two adrift of Swansea who both have games in hand ahead of a thrilling climax to the relegation battle.

Former Tottenham midfielder Livermore struck deep into stoppage time to send the home fans at The Hawthorns into raptures after both sides had missed good chances in a scrappy game dominated by the visitors.

The home team’s keeper Ben Foster made several telling saves while West Brom’s Jay Rodriguez had a header cleared off the line by Jan Vertonghen and striker Salomon Rondon scuffed his shot from a good position.

Elsewhere, Swansea City’s hopes of salvaging their place in the Premier League suffered a potentially grievous blow as Ryan Fraser’s deflected strike earned Bournemouth a 1-0 win to secure another season of top-flight football for the Cherries.

Bournemouth ended a run of three straight defeats when Andrew Surman rolled a 37th-minute free-kick across the edge of the box to the diminutive Fraser, whose shot cannoned off Alfie Mawson to leave Lukasz Fabianski with no chance.

Jordan Ayew should have equalised minutes later only to shoot wide from six metres but although they had their chances, Carlos Carvalhal’s side were unable to add to their 33-point haul in the danger zone.

Swansea, winless in seven matches, have two more games at home to relegation rivals Southampton and doomed Stoke City but Eddie Howe’s Bournemouth, who could have won more convincingly but for fine keeping from Fabianski, are safe.

Argentine midfielder Roberto Pereyra meanwhile scored the opening goal and set up the second as Watford beat Newcastle United 2-1 to secure their top-flight status for next season.

Watford got off to a flying start with a clever pass from Abdoulaye Doucoure allowing the unmarked Pereyra to score within the first two minutes. The Argentine assisted Andre Gray’s header in the 28th minute to double the hosts’ lead.

Striker Ayoze Perez scored 10 minutes into the second half to give Newcastle some hope of a comeback win and the much-improved visitors piled on the pressure in search of an equaliser but Watford held on to win their final home match of the season.

West Ham United improved their prospects of avoiding relegation from the Premier League with deserved 2-0 victory at below-par Leicester City on Saturday.

West Ham, who moved on to 38 points and should be safe with two home games remaining, were the brighter side from the start and deserved their lead after 34 minutes.

The lively Marko Arnautovic hit the bar, then regained possession and laid on a pass to give Portuguese international Joao Mario a simple goal. Leicester protested in vain that Arnautovic had fouled Christian Fuchs.

Booed off at halftime, the hosts improved a little with a double substitution but conceded again in the 64th minute to Mark Noble’s fine volley. Leicester remained ninth in the table.

New round of talks on local government reform pledged

Medicines for human use should be clearly understood by the user