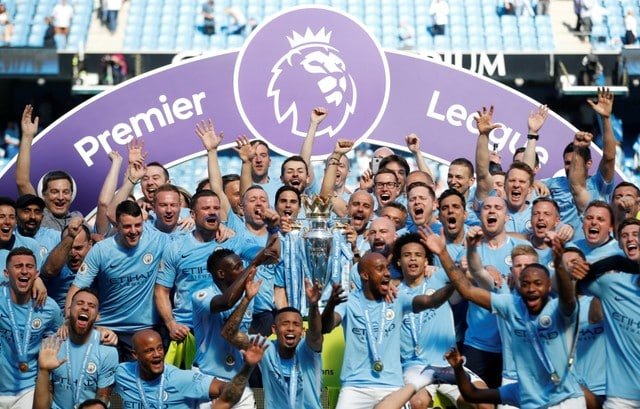 Champions Manchester City will have to wait to break the Premier League points record after they were held to a 0-0 draw by Huddersfield Town at the Etihad Stadium on Sunday.

City, who lifted the Premier League trophy in front of their fans after the match, mustered only two shots on target all game, as relegation-threatened Huddersfield dug in for a vital point.

The draw means City have 94 points, one short of the season record set by Chelsea back in 2004-05, but they still have two games left to play.

Huddersfield gave their survival hopes a huge boost with a point that moves them three clear of the bottom three ahead of their midweek trip to Chelsea.

“England is a special place and is so tough,” City manager Pep Guardiola said after the match. “Today we saw it. You never know if you are going to win, but I had no doubt what I had to do.”

Guardiola handed John Stones his first Premier League start since January in defence, and the England international was immediately put under pressure by a determined Huddersfield side.

City goalkeeper Ederson was forced into the first meaningful save of the game 11 minutes in, but Florent Hadergjonaj should really have done better from a good position.

Hadergjonaj then found Alex Pritchard on the edge of the box, who again forced Ederson into a smart stop. City, however, failed to mount any sort of attack.

City improved after the break, as Guardiola shuffled his pack, but a poor final pass and brave defending from the visitors kept the champions at bay.

As the game went into stoppage time, Huddersfield backed off and that tactic almost proved costly as Nicolas Otamendi curled just wide.

The visitors held on for a crucial point, meaning City must wait for that points record. On an afternoon of celebration at the Etihad, the champions will not be too downbeat about the result.

“This gives us belief (that Huddersfield can stay up) but to be totally honest I’ve had belief in this group of players since pre-season,” Huddersfield manager David Wagner said. “Every player and member of the backroom staff believes.”

Iran jails 16 women for joining IS in Syria – prosecutor