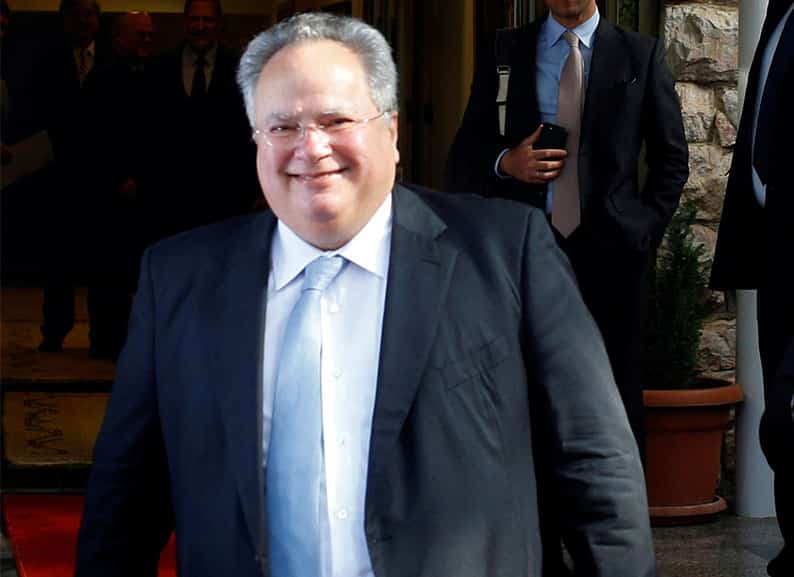 Greece’s Foreign Minister Nicos Kotzias will be in Cyprus next week for reasons other than the much-hyped trilateral summit between Israel, Greece and Cyprus.

Kotzias is due to testify on Monday in a court case which pits the Greek state against Kykkos monastery.

The case before the Nicosia district court has dragged on for 10 years and concerns a tug of war over land, now worth €2.5m, that Greece bought from the monastery in 1998 for the purposes of building a new Greek embassy.

At the time, former Greek President Constantinos Stephanopoulos had visited Cyprus with his foreign minister. He had asked apparently for a piece of land to build a new embassy, citing the grand buildings other foreign countries such as the US had on the island, while Greece’s was still housed in a home-like structure in central Nicosia and the Greek ambassador’s residence was by the UN buffer zone.

The bishop of Kykkos donated four stremma (4,000 square metres) of land on Prokopiou street in Engomi to that purpose. A few weeks later, the Greeks came back asking for more land to house the ambassador’s residence.

The Greeks offered to pay for this piece of land and the bishop decided to provide another four stremma at a much lower price than its going rate.

In total, Greece got 8,000 square metres of land for half a million Cyprus pounds.

Crucially, the contract included a clause that specified the land should only be used for the purposes of building the embassy, and if this was not done then the land should be returned back to Kykkos in exchange for the money, with interest.

To date, no new embassy has been built.

In 2012, it came to Kykkos’ attention that the land in question had actually been put up for sale by the Greeks and was even included in Greece’s asset development fund which aims to make the best use of Greece’s state property.

Through the grapevine, Kykkos heard rumours – which could not be independently confirmed by the Sunday Mail – that Greece had clinched a deal to sell the land to a company acting on behalf of a foreign country which wanted to build an embassy in Nicosia.

The rumoured agreement was worth some €8.3m.

According to the claims by the monastery, the news upset the bishop who saw Greece trying to profit off the backs of a donation.

He took the case to court which ordered a temporary decision to halt any sale of the land.

True to the conditions of the agreement, Greece was not allowed to utilise the land in any other way other than building its own embassy. As such, the court in 2017 ruled the eight stremma should be transferred back to the monastery in return for the money, now valued, with interest at some €2.5m.

Soon after this, however, Greece apparently showed interest in wanting to keep the land to finally build its new embassy.

At this point the narrative between the two sides differs significantly. The monastery claims that the bishop was willing to have the land transferred back to them but without the monastery coughing up the €2.5m.

Instead, the monastery would rent the land to Greece for five years at a cost of one euro per year.

If Greece, in the five-year span began to build the embassy, then the land would be transferred back to Greece for another one euro.

This was apparently outlined in a letter sent by the bishop shortly after the court ruling in February 2017.

Kotzias had reportedly said to the monastery Greece knew full well the bishop didn’t have the funds to pay the money and get the land back under their name.

Nonetheless, by August 2017, Greece had apparently not responded and the bishop was getting edgy as interest was piling up.

Equally significantly, Kykkos had apparently found another buyer willing to pay €9m for the land.

The narrative from the Greek side is that they had prepared plans to build the embassy when they were shocked to read press reports saying Kykkos wanted to sell the land to Russian interests.

Whatever the truth may be, the case went to court again with Kykkos seeking a decision to order the land registry to transfer the land back to the monastery and to specify an account whereby Kykkos could deposit the €2.5m.

This money would come from the sale of the land to the buyer the bishop had found.

The next episode in the Motherland vs. Kykkos monastery saga is set to play out on Monday morning in Nicosia district court, with Kotzias starring in a leading role.

One miner dead, three still missing after quake at Polish coal mine -mine owner