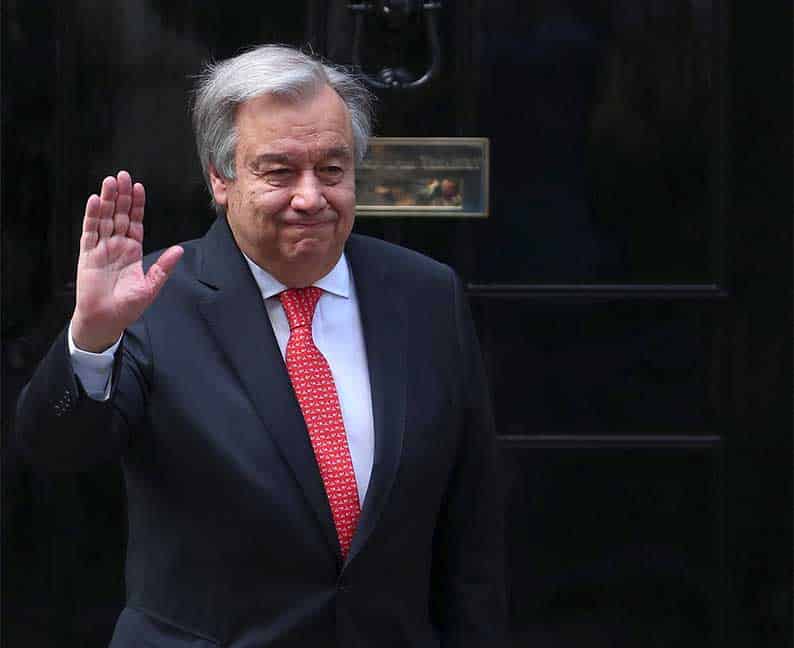 Antonio Guterres, the UN secretary-general, was in feisty form in an interview he gave to the BBC in London last Thursday about the problems that bedevil the UN and the world in these turbulent times.

Alas he did not mention the Cyprus problem despite the fact that the framework that bears his name was being twitted and retweeted since last Monday, courtesy of Mustafa Akinci’s attempt to outwit his sparring partner by calling his bluff on the Guterres framework.

Guterres was probably unaware of Akinci’s acceptance of his framework as it did not feature at all in his interview. He expressed grave concern about the rise of nationalism, racism, nuclear proliferation, the possible cancellation of the nuclear deal with Iran and the disunity at the UN Security Council on Syria. But he did not mention the Cyprus problem and the likelihood of tension in the sea around the eastern Mediterranean, which is just as well as the last thing any one wants is the UN secretary-general worrying on the BBC that there may be trouble in Cyprus as the summer season approaches.

He repeated his concern that the danger to world peace is more acute now than during the height of the Cold War. Russia and America do not have clear demarcation lines which is very unsettling for world order he said. He was, however, upbeat about the likelihood of agreement regarding the control of chemical weapons.

His analysis is that unlike the time of the Cold War the spheres of influence are blurred and there are new players and new challenges. Countries such as Turkey, Saudi Arabia and Israel are no longer under the full control of their alliances. They have their own agendas that often straddle and even defy the East West divide which makes things less predictable.

He did not say this, but there are Mafia states, loose cannon states and failed states and they are all a source of problems for the UN, although the biggest problem for the world is when big states go rogue.

As is normal these days he was asked about Brexit but he refused to be drawn. When asked what he thought of Brexit as a Portuguese European he said he was the UN secretary-general not a Portuguese politician.

He had previously been a politician and prime minister in Portugal but his most recent activities have been as an international statesman. Before he was unanimously chosen to the office of UN secretary-general, he was UN High Commissioner for Refugees until 2015 during a critical time in the history of the protection of refugees and displaced persons.

As one would expect he is a great believer in negotiation and compromise as the only way of resolving political problems and dead against the doctrine of the military strategist Carl Von Clausewitz that war is diplomacy by other means, which is beginning to raise its ugly head again with the rise of nationalism.

When pressed on the Iran nuclear deal and the crazy idea of scrapping it, Guterres was diplomatic. He repeated the obvious truth that the deal is imperfect but that it would not be wise for the US to renege on a treaty banning the development of nuclear weapons in Iran without another treaty to put in its place.

I do not understand what’s got into the Americans and the Israelis with Iran. If China, Russia, Britain, France, Germany and the UN think the Iran nuclear deal is fit for purpose why should we believe the US president that the ban is a bad deal? We are not dealing with a New York real estate deal but one whereby Iran agreed to ban nuclear weapons when both America and Israel are nuclear powers. Why is that such a bad deal?

Antonio Guterres was impressive. He spoke in excellent English with clarity and conviction and we are very fortunate he has lent his name to dignify a framework for sorting out the Cyprus vendetta.

To avoid a real danger of moving into Clausewitz’s diplomacy by other means, Mustafa Akinci outmanoeuvred the siren voices calling for two states on both sides by offering a two stage approach to the Guterres framework. A two state solution is a dangerous nonsense. It is not what people really want as it would dilute Cypriot identity.

The clamour for a two state solution on the Turkish side is borne of frustration rather than a real wish to break away. On the Greek side it is borne of bitterness and a resurgent nationalism exemplified by the fascist Elam.

Also, the good people of Cyprus are not served well by their politicians who are so up themselves they cannot see the wood for the trees or the dangers that lie ahead, save for Mustafa Akinci’s patriotic cri-de-coeur. ‘If the Greek Cypriots accept the Guterres framework as it is without any alterations, it should say so without delay. In that case we can announce it as a strategic package agreement’ he tweeted.

I believe it is both a cry from the heart by a true Cypriot even if it also calls Anastasiades’ bluff. The fact is that there is a framework; it was put forward by Guterres; it comprised a number of constituent elements; and it formed a package from which the two sides are not supposed to cherry pick. Guarantees are not a problem because they are subsumed under implementation: how to ensure that the new constitution will be respected. The 1960 constitution has not been followed by the leadership of the Greek Cypriot community in that the government of the republic of Cyprus was supposed to involve the participation of the Turkish Cypriot community and it hasn’t. So implementation mechanisms are necessary.

Turkey’s intervention in 1974 did not, however, bring about Turkish Cypriot participation in the government of the republic. The Guterres formula addresses this, not by foreign guarantees but internal fail-safe mechanisms.

Troops will need a bit of work, but the Turkish side is seemingly prepared to come down to 650 officers and men which is de minimis in the context of the 30,000 that occupy northern Cyprus at present.

So what is there to reject? A two stage rather than a two state solution is much the best way forward if people would only stand back and think in practical terms.

The two communities have been at daggers drawn since 1955: the civil servants and politicians and judges and others who are going to make any agreement work do not know each other at all. They have to develop new loyalties and find new ways of thinking and administering the state under a new system. It is not humanly possible for this to happen overnight. It has to be done step by step. There need to be phases within stages and trial and error until the right balance is struck. This can only happen if government is brought under one roof even if very loosely –  but without further delay as Mustafa Akinci suggests.