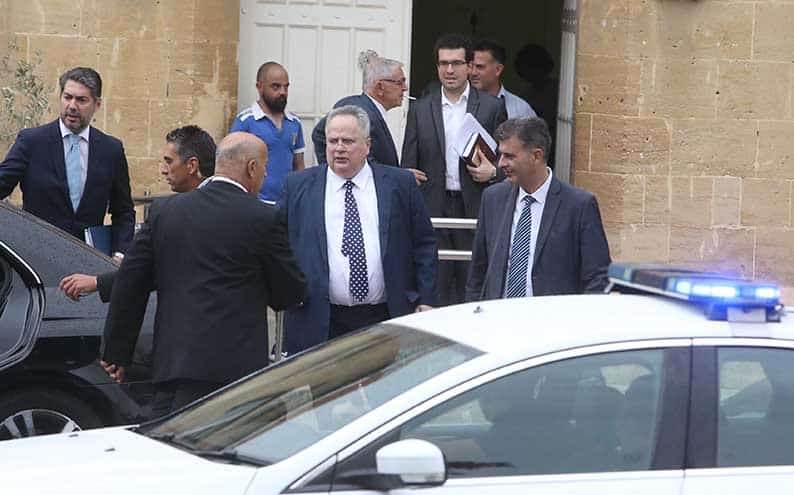 “I am not dodgy mafia” and “it is a shame that the foreign minister of Greece is before the court of law,” were just two of the choice statements from Nikos Kotzias as he was cross examined at Nicosia district court on Monday as part of Greece’s legal battle with Kykkos monastery.

The monastery has taken the Greek state to court in a dispute over eight stremma (8,000 square metres) of land it now wants back. Half of it had been donated so Greece could build an embassy on Prokopiou street in Engomi while the other half was sold for a sum of 500,000 Cyprus pounds in 1998.

Twenty years later, no embassy or residence has been built.

During the court session, Greek Foreign Minister Kotzias repeatedly accused the lawyer acting on behalf of Kykkos monastery, Costas Velaris, of being personally opposed to Bishop Nikiforos of Kykkos’ love of Greece and acting against his client’s interests and his wishes. Kotzias claimed Velaris had ulterior motives in taking the case to court: money.

“Even the Turks have treated us better than this,” Kotzias said, while being cross examined for over two hours.

“It is my great sadness to be in court. And a shame for the Greek and Cypriot courts.”

More controversially, he added “Greece was not vilified this much during the junta.”

The case before the court now is related to an earlier legal battle between the two parties in 2017 when the court ruled that Greece should return the land to the monastery. In return, the monastery should in turn pay back the money it received with interest – at present €2.3m.

This was because when Kykkos monastery sold the land to the Greeks, it included a clause that stipulated the land could only be used for the purposes of building an embassy.

In 2012 however, the bishop was led to believe that Greece was trying to sell the land to Tofargo, a company acting on behalf of the embassy of Qatar, Velaris said in court.

The Kykkos monastery had in the meantime found a prospective buyer for the land but could not proceed with the sale because the land was still in Greece’s hands. They claim they had tried to make an arrangement with the embassy so they could deposit the €2.3m in an account for them, but to no avail.

The present hearing is because the monastery wants the court to impose the land transfer back to the monastery and specify an account in which the money should be deposited.

Responding to the accusation that Greece tried to sell the land, Kotzias said Greece could not have done so because the bureaucratic procedure – signing the property off from the foreign ministry to Taiped – was never carried out.

Kotzias specified he only took on the case in 2017. Up until then it had been handled by Greece’s legal counsel and the foreign minister did not have the power to remove the attorney assigned to the case.

Since then, Kotzias outlined a law has been passed in Greece, through his initiative, which does not leave the minister as powerless as he was then.

In March 2017, Kotzias met with Bishop Nikiforos where he said the two were quick to put the past behind them and had mutually agreed to proceed with building the embassy of Greece.

The minister however claims he saw two scenarios before him at the meeting, with the bishop and his lawyer presenting very different positions.

“One was that of a God-loving man,” referring to the bishop, who with tears in his eyes said he wanted to see the flag of Greece waving before Metochi Kykkou (the Kykko monastery annex in Engomi where the embassy was to be built) while on the other hand, Velaris was visibly opposed to Greece keeping hold of the land.

Twice, according to Kotzias, Velaris had insisted that Greece should keep only four stremma of land for the embassy alone, while the bishop slammed his hand down and insisted Greece’s entire plans went ahead.

Around two weeks later Greece sent a technical team to Cyprus to assess the land and begin preparations to proceed with architectural plans.

In court, Velaris did not respond to Kotzias’ allegations that he was not acting according to his client’s wishes nor question why he would still be representing the bishop if their views were so different.

In April 24, Velaris sent a letter to Kotzias outlining that the meeting held on March 28 was not an agreement of sorts but a friendly discussion. As such, he outlined a proposition in which a contract could be struck with the bishop that the land would go to the monastery for five years without the €2.3m being paid so they could hold on to it until the embassy is built.

Greece would pay €1 per year, the letter outlined.

Kotzias said this was proof the lawyer was acting against the bishop’s wishes as Nikiforos had thanked the minister during the meeting but then all of a sudden, Kotzias was looking at a letter drastically different to the picture painted in March.

“I’m an old person I’ve seen many negotiations. I’ve carried out many for the Cyprus problem and I can recognise when a third party is trying to hamper a deal,” he told the court.

“If it was just a friendly discussion then the bishop’s accountant would not have been there.”

The minister went on to say that he found out in due course the bishop had not known about the letter. Kotzias specified he hadn’t responded to it because “I don’t engage in dialogue with people acting deceitfully” and because talks on the Cyprus problem picked up with the conference in Crans-Montana.

“I don’t want to argue with the Greek church. He (the bishop) is a holy man, deeply philhellenic.”