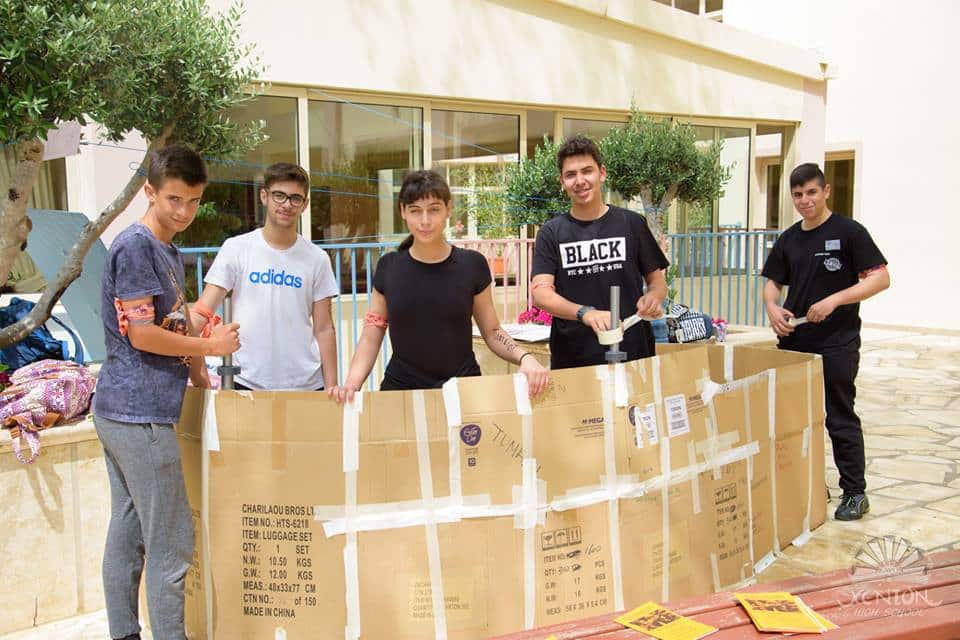 Inspired by NGO World Visions ’30 hour famine’, a programme dedicated to the well-being of children, 30 pupils of Xenion High school in Paralimni went without food for 30 hours recently.

The idea was for the teenagers to drink only water and sleep rough while also taking part in activities designed to raise their understanding of what it means to be poor and other actions helping their community.

“The fast started on Friday morning at 7am, when they had their last meal with their families,” teacher and leader of the project Kendra Loizou told the Cyprus Mail. “They then had normal lessons until 1.45pm, to feel what it is like to have educational activities while hungry.”

Not only did the 14-year-olds go to lessons, but while the other kids were eating and resting during their break, they were engaged in building shelters from cardboard and other trash in which they were going to spend the night outside in the school yard.
“The idea was to get an idea what it is like to try and sleep hungry without adequate housing,” Loizou explained.

On Friday afternoon, the group, which was divided into four ‘families’, were engaged in simultations designed to get them to understand the economic barriers which perpetuate the poverty cycle.

They also had community service projects, such as a beach clean-up, helping out at a retirement home and collecting money for charity.

By nightfall they had the choice to sleep in one of the shelters or on the floor of the school.

Early the next morning, by now really hungry and tired, they walked dogs for a dog shelter. Before the teams were allowed to finally eat and rest, they were required to demolish the shelters they had created the day before.

Both students and teachers commented on their experience.
“It made me rethink the importance of food, we often eat when we are not hungry,” John Fitsiou, 14, said. “When I got home I felt really comfortable and realised my bed is a luxury.”

Both he and classmate Mariah Zentani said it helped that they were constantly busy.
“We were distracted and being with my classmates helped. There was only one moment when I thought of giving up, when I was really cold at night,” she said.

“I was impressed how devoted the kids were when they had to starve,” said Marie Constanti, one of the more than 27 teachers and staff from the school who supported the event.

The fundraising goal of the school is to raise €6,000, and more projects will follow to reach this. Those who which to donate can pass by the school or pay with their credit card on the school’s facebook site.

After all, it takes only €1 a day to keep a child fed, clothed and with access to health care, while currently every second a child dies from hunger or hunger related illnesses.

Russia’s Putin sworn in for another six years in office