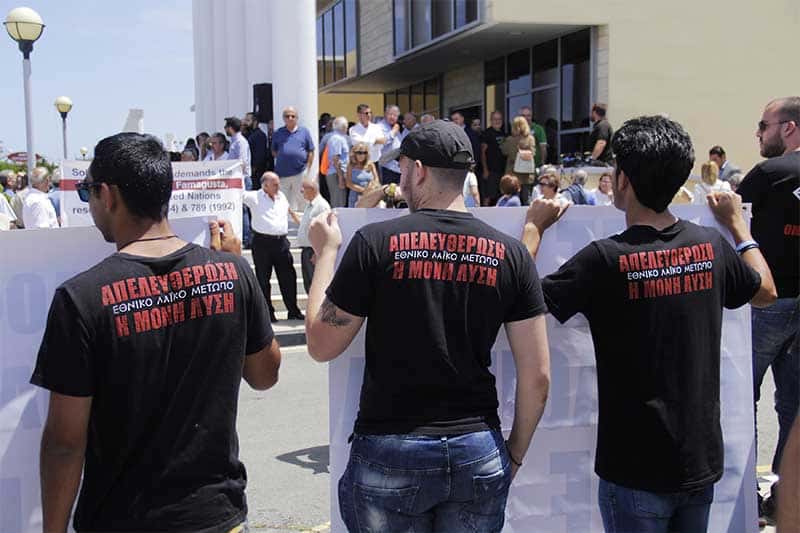 ELAM protesting in front of the MEPs on Tuesday

Chairwoman of a delegation from the Committee on Petitions of the European Parliament Cecilia Wilkstrom on Tuesday told refugees from Famagusta that even though she could not give them hope to return home, her committee was trying to look at any small step forward to help them.

The delegation was in Cyprus to conduct a fact-finding mission in Famagusta to reassess the situation there and again raise the issue of the return of Varosha to its lawful inhabitants on the basis of the provisions of a European Parliament Declaration of 14 February 2012.

“I cannot give you any hope, but what I can promise is that the European Parliament’s Committee on Petitions takes seriously the situation with regard to Famagusta and is trying to look at any possible small step forward,” Wilkstrom said at a joint news conference later with Famagusta Mayor Alexis Galanos in nearby Dherynia.

She also said when the delegation returned to Brussels they would prepare a report on the visit, which would reflect what they experienced and what the way forward could be.

Just before the MEPs arrived in the area on Tuesday nine people, eight Greek Cypriots and one British citizen, who were waiting for them on Glossa beach adjacent to the fenced-off ghost town of Varosha were briefly interrogated by authorities in the north.

According to the Cyprus News Agency, the nine were held up for 15 minutes and had their photos erased from cameras and phones, being told it was a military area and they had to leave.

The nine then moved to join more Greek Cypriots on the road in front of the Constantia Hotel awaiting the arrival of the MEPs.

Other Greek Cypriots told the delegation when they arrived that they just wanted to go home. There were also some members of the Turkish extremist group the Grey Wolves holding a protest against the visit, CNA said.

They entered the beach area during the visit of the MEPs and hung Turkish flags on the beach umbrellas, and approached the MEPs with a petition saying Turkish Cypriots also had rights to the island.

Meanwhile far right group ELAM protested to the MEPs about the opening of a checkpoint at nearby Dheryneia.

One of the Greek Cypriots there, Costas Loukas, told CNA he grew up in Famagusta and lived there until his 27th birthday. “Today I am 71 years old and I came here to remember,” he said.

During the news conference, Galanos said Famagusta was “not just a confidence building measure. It’s much bigger than that. It is a humanitarian problem for Europe,” he added.

Wikstrom said she came to Cyprus not only as chairwoman of the Committee on Petitions but also representing the European Parliament in general. “We have all tried to look for different ways to find a starting point for a comprehensive solution to this conflict,” she said. “We are standing on European soil and we must remember that,” she added.

Wilkstrom said time was running out and many people die without having the opportunity to return home while generations grow up without having lived as Greek and Turkish Cypriots had before 1974, side by side.

The delegation’s mission was a follow-up 10 years after its previous fact-finding visit to the island in 2007.

12 per cent of Cypriots carriers for Thalassaemia