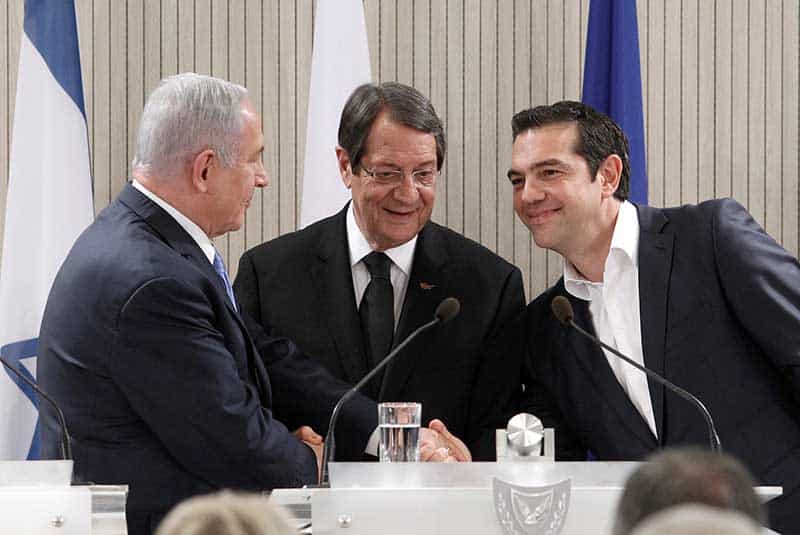 Cyprus, Greece and Israel on Tuesday confirmed they would be preparing and signing an inter-state agreement for the EastMed gas pipeline within 2018.

Following the fourth trilateral summit, held in Nicosia, President Nicos Anastasiades, Greek Prime Minister Alexis Tsipras, and Israeli Prime Minister Benjamin Netanyahu stressed the importance of the pipeline project, saying in their joint declaration that it represented “a viable and strategic option of special interest, both for our countries and the European Union”.

The EastMed Pipeline project aims to transport gas from Cyprus and the Eastern Mediterranean to Europe via Crete and mainland Greece.

Anastasiades said promoting its implementation was a key ingredient in the cooperation between the three countries.

“We reiterated our commitment to work decisively, aiming to sign a relevant inter-state agreement within 2018,” he said at a joint news conference.

Tsipras said the pipeline was the main topic of the summit and spoke about the strategic cooperation between the three countries.

“There is a common understanding on the need to deepen this cooperation, as well as on the need to find ways for secure transportation of energy resources from the Southeastern Mediterranean to Europe,” he said.

It was also important that they had agreed to sign an intergovernmental agreement within 2018, he added.

“Not only is it important for the three countries and Italy but also for Europe that wants to diversify its energy sources,” he said.

All three also referred to the Euro-Asia Interconnector, an electricity cable connecting Israel, Cyprus and Greece.

“We reconfirmed our commitment in the next steps forward and recognised its benefit in upgrading our countries’ role in this area,” Anastasiades said.

Netanyahu described it as an “information pipeline” to be created through fibre-optics, while Tsipras called it a “top interconnectivity project between the three countries” and also for the wider region, as well as for Europe.

“We encourage the conclusion of the remaining studies and the issuing of the relevant decisions by the regulatory authorities of all three countries,” their joint statement said.

“Access to high and ultra-high-speed networks is the basis for the development of the digital economy,” it added. “Our countries are proceeding with policies that could promote, facilitate, improve and strengthen our economic growth interconnection.”

The joint declaration also referred to the Cyprus issue and Turkey’s recent interventions into the island’s exclusive economic zone but did not refer to Ankara by name.

It rejected recent illegal actions in the Eastern Mediterranean and the Aegean Sea which “are a serious cause for concern as they violate international law and are contrary to good neighbourly relations”. It goes on to express full support and solidarity with Cyprus in exercising its sovereign rights in its EEZ.

Anastasiades repeated his commitment to the Cyprus talks, adding: “In order for the dialogue to be creative and productive, Turkey should cease from taking any provocative steps or violations of the Republic of Cyprus’ sovereign rights.”

Tsipras also expressed support for Anastasiades’ position as regards the resumption of talks “always on the basis of the parameters set by the UN Secretary-General”. He also called on Turkey to respect the sovereign rights of neighbouring countries, in accordance with international law.

On the sidelines of the main summit the delegations of officials held trilateral and bilateral talks on various other areas of cooperation, signing memorandums of understanding (MoU) in the fields of space technologies, satellite operations and applications, telecommunications, information and communications technology, an implementation agreement on subregional marine oil pollution contingency plan and a memorandum of understanding between their chambers of industry and commerce.

Netanyahu spoke of a great alliance being built by the three countries saying, “the sky’s the limit. I find these meetings not merely productive but also very encouraging,” he said. “They encourage us about the future. You have to look only a few years back and it is almost inconceivable that our countries did not have this warm, intimate and direct contact. We were in many ways isolated from each other and that is incredible,” he said.

He said the three democracies of the Eastern Mediterranean had common interests, precisely because they had common values, were committed to the same vision of how society should be organised, how freedoms should be nurtured, and how pluralism should be protected “and I think we can do it better than separately.

“I know that we can do it better together and in fact we are doing exactly that,” he stressed.

The next trilateral summit will take place in Beersheba, Israel.