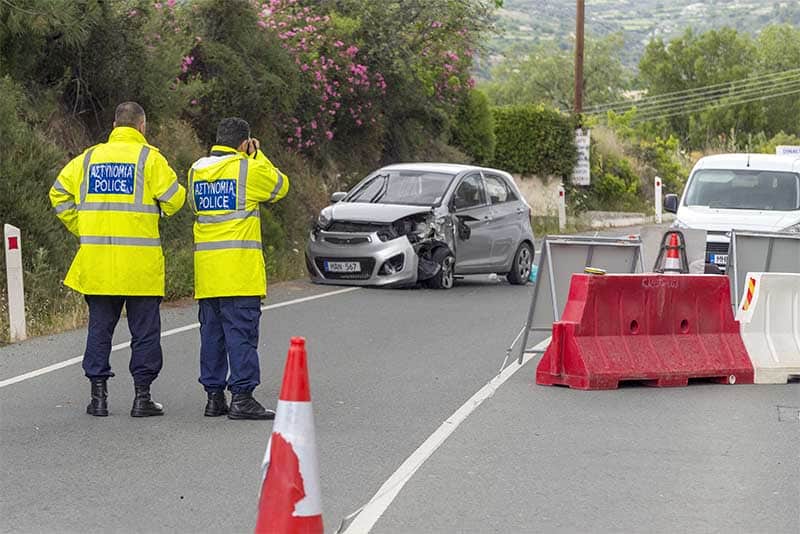 Police on Tuesday arrested a man wanted in connection with a shootout in Limassol at the weekend that saw an officer critically injured and a second sustaining lighter injuries.

Police said Elias Mouzos, 38, was detained at around 11.30am in Kapilio village in Limassol. Mouzos had been sought in connection with a gunfight in Ypsonas on Saturday evening in which officer Giorgos Georgiou, 37, was critically injured.

Mouzos was arrested after the car he was driving crashed into two cars while being chased by the police.
According to Limassol CID chief Ioannis Soteriades, Mouzos’ car was spotted moving at breakneck speed on the Limassol to Platres road and after failing to stop as per the instructions of officers, a patrol car went after him.

In his attempt to overtake other vehicles, at a point where one traffic lane was closed for works, Mouzos’ vehicle collided with two other cars and was immobilised.

The policemen who followed the vehicle arrested the 38-year-old, who was slightly injured as were the drivers of the other two cars.

No weapons were located in the vehicle, Soteriades said, but following Mouzos’ instructions, police located a fire arm and explosives in an area in Ayios Mamas village, Limassol.

There was also a woman in the car Mouzos was driving.

Following Mouzos’ arrest, police believe they are close to solving the case.

He is expected to be taken to court on Wednesday for a remand.

The two officers were shot at in their vehicle at about 10pm on Saturday after responding to a call about a parked rental car in Ypsonas whose three passengers were behaving suspiciously.

On arrival at the scene, shots were fired at the patrol car and the officers returned fire.

Three suspects, including one woman, had been arrested, and police had put out a wanted person bulletin for Mouzos.

Police did not provide more information as to what the suspects were planning to do before the patrol car arrived, but media reports said they were discussing a murder plan.

Mouzos, reports said, was the third person in the car, along with the two men who were arrested on Sunday, and was the one who fired at the patrol car.

Police on Tuesday refuted accusations by Paphos mayor Phedonas Phedonos, who said on Monday that the force had done nothing about Mouzos in the past, despite him personally informing the leadership and the ministry of justice.

Phedonos claimed that Mouzos led a huge underworld ring in Paphos and the wider district, mainly dealing with drugs. On Monday morning, Phedonos tweeted that he had made at least 10 public references to the man and personally informed crime fighting authorities but nothing was being done.

Phedonos said the suspect is known to police in connection with a bomb against a state prosecutor and some four other bombings against people who sought to give up his gang and move to a smaller trafficker.

In response, police said although the mayor’s claims have been made known to them in the past “the legal framework does not allow us to do what Mr Phedonos publicly points out to us”.

In cases when adequate evidence had been secured, police said, there had been arrests and some of these cases are pending in court.

“We explicitly reject once again (Phedonos’) indirect or direct accusations against the police, as to how they act, their objectivity and effectiveness,” police said in a written statement.

The 33-year-old woman, in whose name the car involved in the gunfight had been rented, was remanded in custody for eight days on Sunday. The second suspect, a 31-year-old man, was detained on Sunday in Limassol. The man had injuries thought to have been caused during the gunfight with the officers. The 35-year-old was arrested later on Sunday. They were both remanded on Monday for eight days.
Georgiou, who was airlifted to Israel on Sunday, is said to be in stable condition. His colleague is being treated at a private clinic in Limassol.

A year from the bomb: Iran deal’s nuclear restrictions