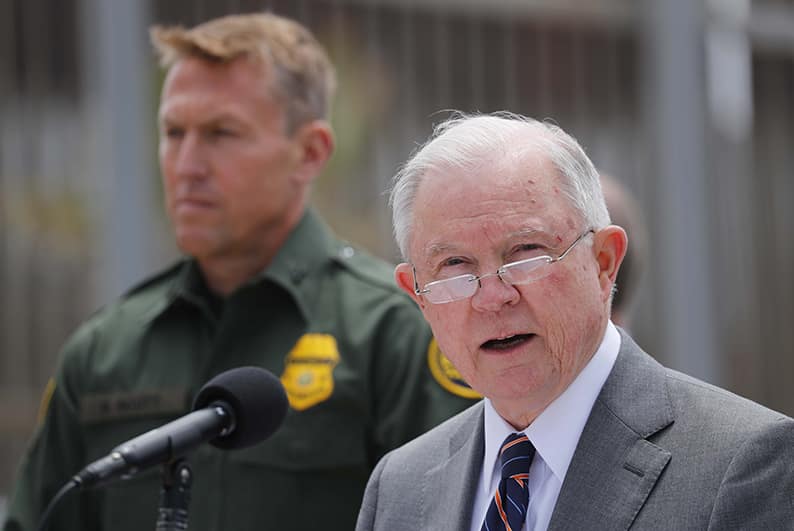 In a March speech at a Washington, D.C. law school, U.S. Attorney General Jeff Sessions slammed “activist” federal judges for blocking some of President Donald Trump’s key initiatives, voicing again a favorite grievance of the administration and Trump himself.

Pointing to courtroom losses on policies such as the travel ban, the Trump administration and its supporters have repeatedly complained of a politicized judiciary they say is determined to thwart the Republican president’s agenda.

Reuters analyzed 41 major rulings in significant cases brought against Trump or his policies and found a more nuanced picture. The administration has certainly suffered courtroom losses, but it has also had important wins.

Moreover, while judges appointed by Democratic presidents have issued many more of the rulings that went against the government, Democratic appointees have also been responsible for a majority of Trump victories. And Republican appointees have handed the administration some of its biggest courtroom losses.

Looking strictly at the numbers, the administration has lost far more often than it has won in court, with 28 rulings that went against its position and 13 in its favor. But those numbers include multiple rulings on the same issues, since some of Trump’s actions have attracted separate lawsuits in several courts.

Looking issue by issue at how rulings have gone, the courtroom score evens out. Both the administration and its challengers have won favorable rulings on 11 specific issues. In some instances, where each side won on the same issue in different venues, Reuters tallied wins for both.

Victories for the administration have included rulings on healthcare subsidies, deregulation, and Trump’s continued ownership of his business empire. The administration has lost rulings in its bid to prevent teenagers in U.S. immigration detention from obtaining abortions and a plan to end Deferred Action for Childhood Arrivals (DACA), which protected some young immigrants from deportation.

The administration’s courtroom victories include six in which judges tossed the case outright. Other favorable rulings refused to block Trump policies or orders as cases proceeded.

In some instances, when the administration has scored a victory in one court, the policy at issue has nevertheless been blocked nationwide by a judge ruling in a different case on the same policy. This has occurred in legal wrangling over DACA, funding for so-called “sanctuary” cities, and exemptions to birth control insurance. Trump’s travel ban was also blocked by lower courts until the U.S. Supreme Court allowed it to go into effect last December.

Department of Justice spokeswoman Kerri Kupec declined to comment on overall outcomes in the Reuters analysis. But she said that the public should be concerned about the increasing use of nationwide injunctions by judges. “The result of these limitless injunctions is that elected officials, no matter their party, are unable to implement public policy except through years of litigation, effectively silencing the people who voted for them,” she said.

The administration has also complained about the quantity of litigation filed against it. In his first months in office, Trump has faced far more lawsuits challenging his policies than Democratic President Barack Obama did during the same period.

Later, the Obama administration saw many key policies challenged in court, including the Affordable Care Act, the Clean Power Plan and a proposal to protect parents of DACA recipients from deportation.

Numerous legal scholars have expressed concern that Trump’s attacks on the judiciary will undermine public confidence in the courts.

“Those kinds of comments feed into the notion that the system is rigged and people can’t get a fair shake in our federal courts,” said Alberto Gonzales, who served as attorney general under former President George W. Bush, a Republican. “If that’s called into question, it calls into question the integrity of our whole judicial system, and that’s very dangerous.”

After unfavorable rulings, Trump has called the judicial system “broken and unfair,” and “so political.”

Trump’s view has also found some support in the legal world. The Federalist Society, a conservative lawyers’ group, held an event in March in New Orleans titled “The Judiciary’s War on Trump.”

“It’s not the entire judiciary, but I believe that there are some judges who have largely abandoned their role of being neutral arbiters of the law and have become de facto part of the resistance movement,” said John Malcolm, an analyst at the Heritage Foundation conservative think tank in Washington and headliner of the New Orleans event.

Trump is not the only president to have blasted judicial decisions. Obama weighed in against a 2010 Supreme Court ruling that lifted limits on corporate spending in elections.

But unlike his recent predecessors, Trump has gone beyond simply criticizing decisions. He has lambasted courts, judges and the system itself, said William Ross, a professor of law and ethics at Samford University in Birmingham, Alabama.

“This is the first time that a president has openly used the courts as a kind of political football,” Ross said.

Trump’s attacks have raised concern in the judiciary, even among judges who have ruled in the administration’s favor. In a March 5 ruling that largely supported Trump’s bid to wind down DACA, U.S. District Judge Roger Titus had harsh words for the president.

“Thoughtful and careful judicial review is not aided when the president lobs verbal hand grenades at the federal courts, the Department of Justice and anyone else with whom he disagrees,” wrote Titus, who was appointed by a Republican president.

Democratic-appointed judges have sided with the administration on, among other things, the border wall with Mexico, deregulation, the end to Obamacare subsidy payments and whether Trump is violating the U.S. Constitution’s anti-corruption provisions.

Republican appointees issued six of the 28 rulings against Trump or his policies, including Washington, D.C. federal judge John Bates who, like two Democratic-appointees, ruled against the administration on DACA.

In lawsuits over threats to withdraw funding from sanctuary cities that limit cooperation with the administration on immigration enforcement, challengers won in three courts, with two of the rulings from judges appointed by Republicans. Trump’s transgender military ban was blocked by four different judges, including one appointed by a Republican president.

“The fact that he’s lost cases decided by Republican-appointed judges and won cases by Democratic-appointed judges helps to demonstrate that the United States continues to have a highly independent judiciary that bases its rulings on the constitution and law rather than the political leanings of the administration,” Ross said.

The administration’s focus on the losses is born of a natural frustration with having initiatives curbed, said Ted Frank, director of litigation for the Competitive Enterprise Institute, a Washington-based conservative think tank. But politics are also involved.

“I think the one thing they think can motivate their base is the idea that there are judges that are frustrating things and you need to keep voting for Republicans that will get the judges that won’t do this,” Frank said.

New parliament to be located at Pasydy hill says ministry