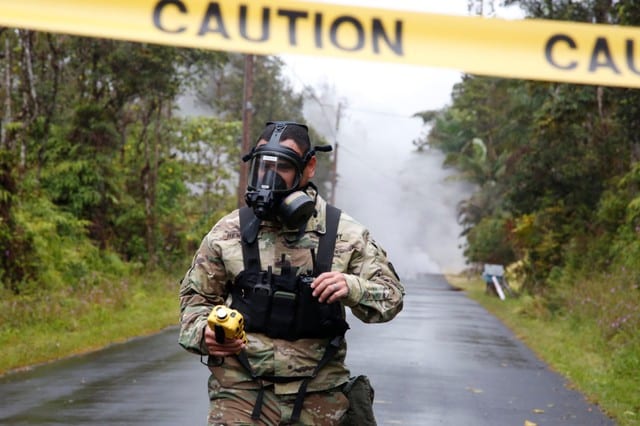 Lieutenant Aaron Hew Lew, of the Hawaii National Guard, measures levels of toxic sulfur dioxide gas near a lava flow in the Leilani Estates subdivision during ongoing eruptions of the Kilauea Volcano

The Kilauea volcano erupted again on Tuesday, spewing toxic gases out of two new vents and prompting authorities to call for an immediate evacuation of residents from a second neighborhood on the Big Island.

The County of Hawaii Civil Defense Agency issued an emergency bulletin ordering residents of the Lanipuna Gardens area on the east side of the island to leave their homes.

“Hawaiian Volcano Observatory confirms 2 new vents. All Lanipuna residents must evacuate now,” the agency said in its bulletin, adding that the two vents had opened near two road intersections and were “actively erupting”.

Earlier on Tuesday residents of the hardest hit area, known as Leilani Estates, drove through clouds of sulfur and over cracked roads to make desperate and possibly last visits home before another eruption by Kilauea, which has already destroyed 35 homes and other structures.

David Nail, who recently sold his business and moved to Lelani Estates from Orange County, California after his wife was diagnosed with Parkinsons disease, said a 20-foot wall of lava blocked him from getting close enough to see if his house had been destroyed.

“All we could do was sit there and cry,” Nail said.

Earlier in the day US Army veteran Delance Weigel, 71, collected some of his prized possessions as steam and sulfur dioxide gas rose out of cracks in the street.

“The way it looks now, I thought I’d try one more time to get my things out,” Weigel said. “Whether we lose our home or not, we’ll see. But we’re definitely going to be cut off. You move to paradise, then this happens.”

No deaths or major injuries have been reported since Kilauea, which has been in a state of nearly constant eruption since 1983, began a series of major explosions on Thursday, spewing fountains of lava as high as 300 feet (90 meters) into the air and deadly volcanic gas up through cracks in the earth.

Kilauea predominantly pours basaltic lava flows into the ocean, but occasionally experiences more explosive events such as the one that began last week.

Some 1,700 residents were ordered to leave Leilani Estates, where lava has been bubbling out of some 2-1/2 miles (4 km) of fissures in the ground emanating from Kilauea lava tunnels on the eastern side of the Big Island.

New areas could be subject to evacuation as fingers of the fissure system slowly spread eastward, threatening neighbourhoods that until now had been considered safe.

“There’s still plenty of magma under the ground. Seismicity is still up,” Hawaii Civil Defence Administrator Talmadge Magno told a community meeting on Monday night. “If things get dicey, you got to get out.”

On Friday, The southeastern corner of the island was rocked by a powerful magnitude 6.9 earthquake on the volcano’s south flank, the strongest since 1975, and more quakes and eruptions have been forecast, perhaps for months to come.

Kilauea has opened a total of 14 volcanic vents since it started sending out fountains and rivers of lava as hot as 2,000 degrees Fahrenheit (1,093 degrees Celsius) on Thursday, officials said.

State data show that in the first three months of 2018, 16 per cent of the $4.81bn visitors spent in Hawaii came from the Big Island, less than half of the levels seen on the islands of Oahu and Maui.