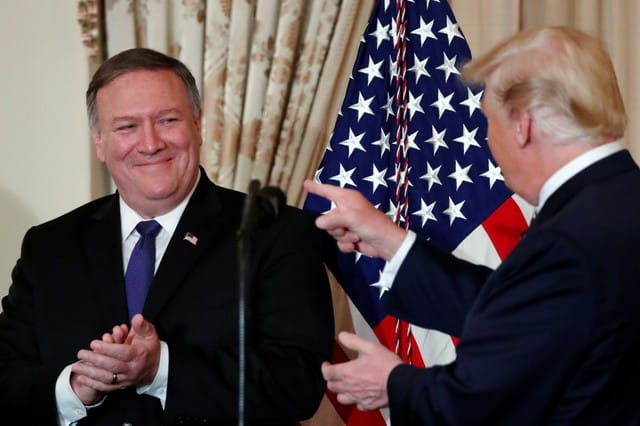 US Secretary of State Mike Pompeo is expected to return from North Korea with three American detainees, as well as details of an upcoming summit between leader Kim Jong Un and US President Donald Trump, a South Korean official said on Wednesday.

Pompeo arrived in Pyongyang on Wednesday from Japan and headed to the Koryo Hotel in the North Korean capital for meetings.

The top US diplomat and officials accompanying him were feted at a lunch by Kim Yong Chol, a former spy chief and currently the North’s director of the United Front Department which is responsible for inter-Korean relations.

Trump earlier broke the news of Pompeo‘s second visit to North Korea in less than six weeks and said the two countries had agreed on a date and location for the summit, although he stopped short of providing details.

An official at South Korea’s presidential Blue House said Pompeo was expected to finalise the date of the summit and secure the release of the three American detainees.

While Trump said it would be a “great thing” if the American detainees were freed, Pompeo told reporters en route to Pyongyang he had not received such a commitment but hoped North Korea would “do the right thing”.

“We’ll talk about it again today,” he said. “I think it’d be a great gesture if they would choose to do so.”

At lunch on Wednesday, Pompeo said the United States is committed to working with North Korea to achieve peace on the Korean peninsula.

“I have high expectations the United States will play a very big role in establishing peace on the Korean peninsula,” said Kim, the former spy chief. The remarks were provided in a pool report.

In response, Pompeo said the group with him was “equally committed to working with you to achieve exactly” that.

“For decades, we have been adversaries. Now we are hopeful that we can work together to resolve this conflict, take away threats to the world and make your country have all the opportunities your people so richly deserve,” Pompeo added.

The pending US-North Korea summit has sparked a flurry of diplomacy, with Japan, South Korea and China holding a high-level meeting on Wednesday.

Japanese Prime Minister Shinzo Abe, who attended the meeting along with South Korean President Moon Jae-In, said his nation would normalise ties with North Korea if the nuclear and missile issues, along with that of the abduction of Japanese citizens, were solved comprehensively.

“We must take the recent momentum towards denuclearisation on the Korean peninsula and towards peace and security in Northeast Asia, and, cooperating even further with international society, make sure this is linked to concrete action by North Korea,” Abe told a news conference after the meeting.

North Korea has admitted to kidnapping 13 Japanese citizens decades ago to train spies. Five have returned to Japan.

The three US detainees still being held are Korean-American missionary Kim Dong-chul; Kim Sang-duk, also known as Tony Kim, who spent a month teaching at the foreign-funded Pyongyang University of Science and Technology (PUST) before he was arrested in 2017; and Kim Hak-song, who also taught at PUST.

Until now, the only American released by North Korea during Trump’s presidency has been Otto Warmbier, a 22—year-old university student who returned to the United States in a coma last summer after 17 months of captivity and died days later.

During the visit, announced only after it was over, Kim told Xi he hoped relevant parties would take “phased” and “synchronised” measures to realise denuclearisation and lasting peace on the Korean peninsula, according to Chinese state media.

Separately, Trump and Xi discussed developments on the Korean peninsula and Kim’s visit to China during a phone call on Tuesday morning, the White House said.

Irish women open up about abortion ahead of referendum

One month after fall of Kabul, economic crisis stalks Taliban