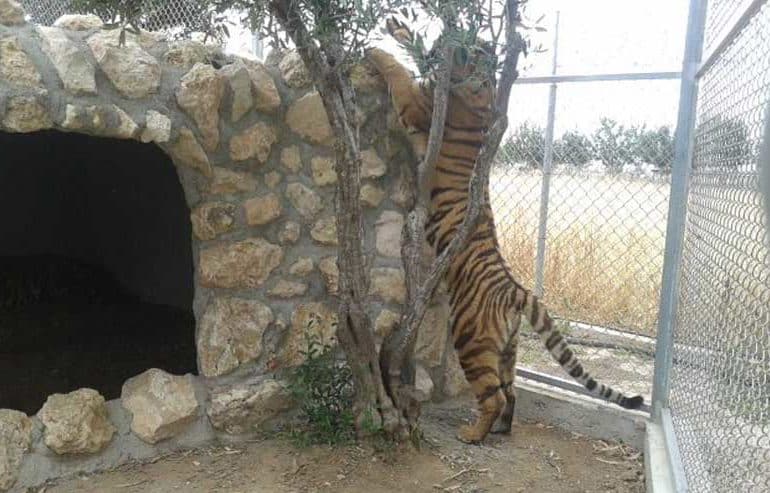 Agriculture Minister Costas Kadis confirmed on Wednesday that one of the two Siberian tigers in a Nicosia private zoo has died, and that he will preside over a meeting with all state services to discuss how to best handle the case of Melios Pet Centre.

The zoo, in Ayioi Trimithias in the Nicosia district, has been operating illegally since last September, the minister said, and that both the town planning service and the state vet services have reported the owner, Menelaos Menelaou, to the police.

The zoo’s licence expired last September and was not renewed as it has no building permit. State officials had said at the time they were discussing the fate of its 3,000 animals, while the zoo owner continued to operate the park and adjacent pet shop without any licences.

Menelaou has long been under fire by animal rights activists over the import and living conditions of exotic animals, some of them endangered species, such as two Siberian tigers, acquired by the zoo in 2015, along with two lions.

It was reported on Monday that one of the two tigers had died, but neither Menelaou nor any state service would confirm.

“Yes, it is true, I was informed of this a few days ago,” Kadis said.

He added that, as a number of state services are involved in the case, he was to preside over a meeting on Wednesday to find the best possible solution as regards the animals of the zoo. The main stumbling block appears to be how to care for the animals if the centre is shut down.

“I want to meet with all competent services, to discuss how to handle the care of these animals,” Kadis said.

He added that it is not a simple matter and that the state cannot just take over the management of a defunct zoo. According to the law, it is the owner of the zoo who is obliged to make arrangements for the animals at his or her own expense.

“There are animals covered by the Convention on International Trade in Endangered Species of Wild Fauna and Flora (Cites), there is mouflon which is under the responsibility of the game and fauna service and so on,” Kadis said. “We must see how to handle all this, maybe even in cooperation with organisations that can contribute to sending animals abroad if necessary, to resolve this once and for all.”

Menelaou, who feels that he is being wrongfully targeted, said he filed a case at the Supreme Court against the vet services citing they are the reason behind the town planning service not granting him a building permit.

The zoo owner said on Wednesday in an email to the Cyprus Mail that his business was the only one in Cyprus to secure a town and planning permit for a zoological park, “yet we are up against a continuous battle because we have made complaints and lawsuits against the agriculture ministry for animal welfare and for the illegal killings of animals and birds that were legally in our possession”.

He added that despite having filed repeated complaints with various ministries, and the attorney-general among others, nothing has been done.

He said that the director of the vet services, “with his illegal acts and irresponsibility, … is putting hundreds of animals and thousands of birds at risk”.

The vet services, Menelaou said, think that by targeting his zoo, they would keep him quiet and make him drop the lawsuits.  “At the same time, the same government employees are promoting illegal parks,” he said.

“They want to hide their mistakes,” Menelaou said.

Menelaou said that he has numerous documents in his possession to prove his case.

As the existing legislation does not specify which animals are considered as pets, pet shops can import anything, even lions and tigers, as long as they were born in captivity and are obtained within the EU.

The problem is that the bill has been in the pipeline for years but still has not been tabled to the House for a vote. Kadis put the excessive delay down to the enormous work load of the legal services.

“I believe it is one of the best in Europe,” Kadis said of the proposed bill, adding that it provides for a list of animals suitable as pets and another one with animals not allowed to be sold in pet shops.

Only one or two other countries in Europe have the same provision, he said.

A matter of great taste: Costa Coffee is the newest reveal from Nicosia Mall