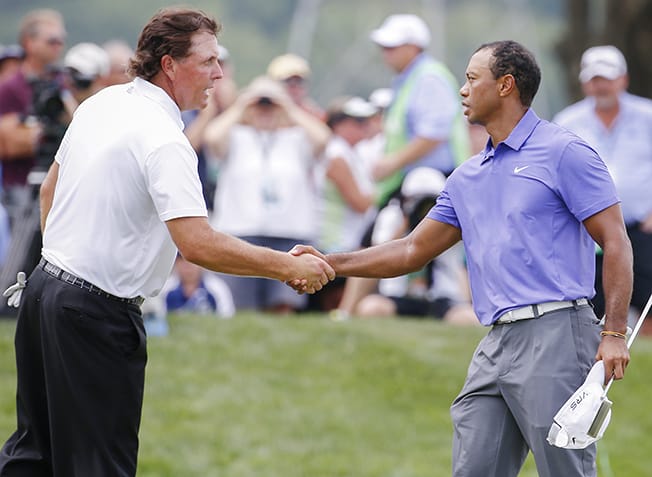 Tiger Woods in his prime played the best golf ever seen and it is highly unlikely those heights will ever be reached again, Phil Mickelson said on Tuesday ahead of this week’s Players Championship.

Mickelson traded friendly barbs with his old rival during their respective press conference at TPC Sawgrass, their relaxed demeanour a far cry from the days when, as the older American admitted, “it sucked” to have to face Woods on the course.

“I don’t think we will ever see that level of play again,” 47-year-old Mickelson said.

“It was the most remarkable golf in the history of the game and I think unrepeatable. I think it was that good.”

The once icy relationship between the multiple major winners has thawed since they hit their 40s, and they appeared genuinely pleased to be grouped together for the first two rounds here on Thursday and Friday.

They have played together only once at the Players Championship — in the third round in 2001 — when Woods was at the peak of the powers that brought him 14 major championships in barely a decade.

It was the era when Woods won the 2000 U.S. Open at Pebble Beach by 15 strokes, a record performance Mickelson suspects some younger players do not fully appreciate.

“I look at 2000 as being kind of the benchmark at the U.S. Open as being the greatest golf I’ve ever witnessed and I believe has ever been played,” said Mickelson.

“And it sucked to have to play against him,” Mickelson continued.

The hype over their grouping this week — they will play with another American in Rickie Fowler — prompted Mickelson to playfully suggest sidelining the other 142 players and deciding the title in a head-to-head winner-takes-all match.

“Fifteen years ago my record against him sucked, and now it’s okay,” Mickelson said, giving a bit of needle. “I’m doing better as time has gone on.”

Asked about their rivalry, Woods smiled and suggested reporters kept an eye on the “big picture.”

“How many times have we won on tour?” the 42-year-old said, fully aware of the answer.

Woods has won 79 times on the PGA Tour, second only to Sam Snead’s 82 but well clear of Mickelson’s none-too-shabby 42 victories.

Chances are neither will add to those tallies this week, but for two days at least they will hog the limelight, two aging heavyweights trying to keep pace with younger rivals who carry less baggage — and a lot less major silverware.