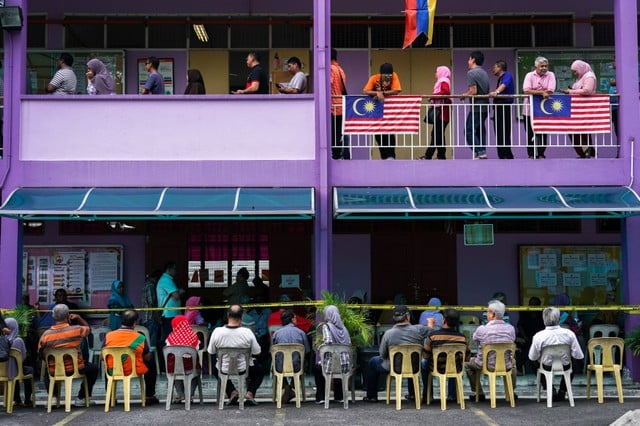 People line up to vote during the general election in Kuala Lumpur, Malaysia

Polling stations closed in Malaysia on Wednesday at the end of a cliffhanger election that pitted Prime Minister Najib Razak’s long-ruling coalition against a resurgent opposition led by 92-year-old former leader Mahathir Mohamad.

Najib’s Barisan Nasional (BN) coalition faced a far greater challenge than ever before in the Southeast Asian Muslim-majority nation, with public anger over rising prices and a multi-billion-dollar scandal that has dogged him since 2015.

An election-eve opinion poll suggested that support for BN was slipping and Mahathir’s Pakatan Harapan (Alliance of Hope) would land the most votes in peninsular Malaysia, home to 80 per cent of the population.

However, under Malaysia‘s electoral system, the party or alliance with the majority of seats in the 222-member parliament wins, and most experts believe that is within Najib’s reach.

“I think right now, it looks more favourable to BN … however, the margin that we’re talking about is very small,” said Mohamed Nawab Mohamed Osman, a Malaysia scholar at the S. Rajaratnam School of International Studies in Singapore.

The opposition claimed the contest was skewed by a revision of electoral boundaries and a decision to hold the poll midweek, which it said would discourage millions from voting. The Election Commission and government dismissed the accusations.

The Election Commission said that 69 per cent of the roughly 15 million registered voters had cast their vote as of 0700 GMT, two hours before polls closed.

Voters complained on social media groups of long queues outside polling centres, which resulted in a waiting time of up to three hours for some. Opposition leaders had called for voting hours to be extended.

“I have received reports from the polling centres that there are many voters queuing to cast their votes and that the process is not efficient enough,” Mahathir said on his Facebook page, warning they risked losing their right to vote.

Most results are expected before midnight (1600 GMT) but the count may spill into the early hours of Thursday.

“This is a big day for Malaysia as this is when we decide our future,” said cardiologist Hasri Samion at a polling station in central Kuala Lumpur. “I think the people have been complacent for too long. We need a visionary to lead Malaysia.”

Najib, casting his vote, said he was confident of victory following what he described as “quite vicious” personal attacks during the campaign.

Leaders from both the opposition alliance and the ruling party claimed their communications were being disrupted by non-stop spam calls on their mobile phones as voting progressed.

The Malaysian Communications and Multimedia Commission said in a statement that an initial investigation pointed to anonymous bot (automated programme) attacks from various sources and on various targets irrespective of political parties.

The pre-election survey published by independent pollster Merdeka Center on Tuesday said BN was set to win 100 parliament seats nationwide and the opposition 83. With these numbers, neither camp would have the 112 seats required to rule and the result would hinge on 37 seats it said were too close to call.

At the last election, BN lost the majority vote in its worst performance ever, but pulled in 133 seats.

Unless he improves on that tally, Najib could come under pressure within his United Malays National Organisation (UMNO) party to stand aside ahead of the next election, analysts say.

Mahathir’s opposition alliance, which counts on urban votes and support from the minority ethnic-Chinese and Indian communities, is hoping that with the former leader as standard bearer, it will draw in Malay voters traditionally loyal to BN.

Nawab, the scholar, said there was a small chance that neither BN nor the opposition secures a majority, which would bring a “hung parliament” and potentially put the Islamic Parti Islam se-Malaysia (PAS) in the position of kingmaker.

However, political analysts believe PAS will fall short of the 21 seats it won in 2013. The Merdeka poll had it winning just two seats.

Mahathir is a polarising figure and many voters are suspicious of him because of his attacks on independent institutions when he was prime minister between 1981 and 2003.

But Najib has another formidable opponent in former deputy prime minister Anwar Ibrahim, who is currently serving a five-year prison sentence on a sodomy conviction that has been attacked by human rights groups as politically motivated.

Anwar led the opposition in the 2008 and 2013 polls. In an unlikely reconciliation, he has joined hands with Mahathir, who sacked him as his deputy in 1998.

Najib, 64, has been buffeted by the scandal over 1Malaysia Development Berhad (1MDB), a state fund from which billions of dollars were allegedly siphoned off.

US Attorney-General Jeff Sessions has described the scandal at the fund set up by Najib as the worst form of kleptocracy. The US Department of Justice has filed several lawsuits to seize more than $1.7bn in assets believed to have been stolen from 1MDB.

Najib, who was chairman of 1MDB’s advisory board, has denied any wrongdoing and has been cleared of any offence by Malaysia‘s attorney general.