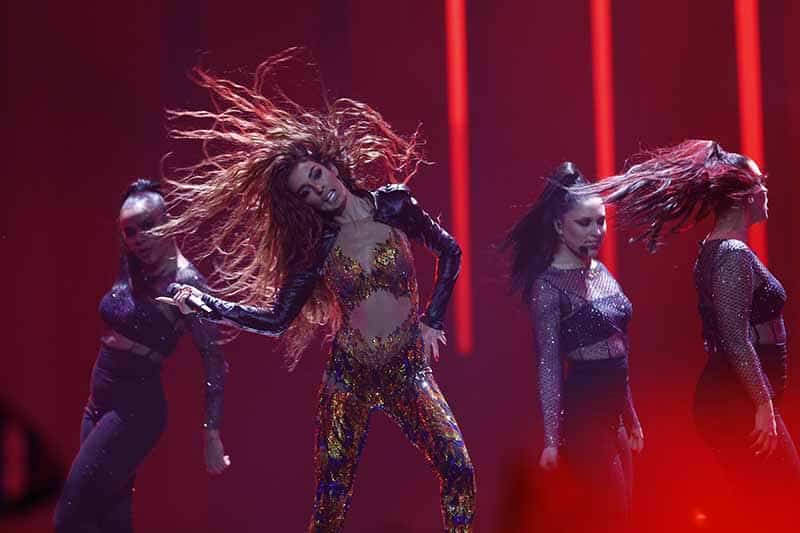 Eleni Foureira, who is a favourite to win Saturday’s Eurovision final for Cyprus, has not only been dubbed ‘Queen Eleni’ on Twitter and had wildly supportive comments on social media, but has also had the undivided attention of the international press.

She is no stranger to success, as she is already known as the ‘Queen of Pop’ in Cyprus and Greece, but now her popularity is soaring to new heights, and she is likely to be remembered all over the world, whether she finally wins or not.

Cyprus has never won the Eurovision even though it has participated 35 times since making its debut in 1981 with Monika, performed by Island, which finished in 6th place.

In another article, an opinion piece entitled ‘Glitter, strobe lights and the dream of a united Europe’, the same paper mentioned the singer again, saying: “Today’s narratives are frequently more harrowing, reflecting the many splinters in Europe’s history. Cyprus’ act this year, Eleni Foureira, will sing ‘Fuego’, a dance number by a Greek-Swedish songwriter. Born in the town of Fier, Albania, Ms Foureira, 31, fled with her family to Greece during the country’s civil war.”

In the UK, The Sun devoted a whole article to the singer and her “catchy pop track”, writing “Cyprus may be a tiny island but it has big hopes for Eurovision”.

The fiery song – the Spanish title Fuego translating into ‘fire’ – elicited strong language, with the Telegraph’s Charlotte Rancie reporting “Cyprus’s Eleni Foureira then ended the night with an outrageous display of red-hot dancing and hair-flicking in an instant classic of a Europop song, Fuego”.

“I wondered at first if it looked too much like a lesser imitation of Beyoncé, but then the hardcore pyrotechnics came out, the dancing kicked up a gear and Foureira might as well have just burned down the arena, stolen the trophy and left it at that. Fuego is the kind of party song that can suddenly do very well in the glitzy atmosphere of the Saturday night finals, especially when delivered with the thermonuclear sass that Foureira was serving.”

German tabloid Bild also commented, saying the last always comes best. The Cyprus entry was the last of the evening. “Those who were nearly asleep after the soporific ballads and insignificant disco songs, woke up when pop mermaid Foureira started,” was their comment. “She brought the room to boil”.

More restrained, the Westdeutsche Zeitung, one of Germany’s biggest newspapers, said the performance was “the nicest moment of the evening” and added the Cyprus performance remains unforgettable and “immediately cast a spell over everybody”.

Twenty six countries will compete in Saturday’s final, 10 selected in Tuesday’s semi final and an equal number voted for at the second semi final on Thursday, plus host country Portugal and what are called the ‘Big 5’ countries, France, Germany, Italy, Spain, and the UK, which are rewarded with automatic spots in the final as they are the five largest economic contributors to the contest.

Public have say over road through Athalassa park