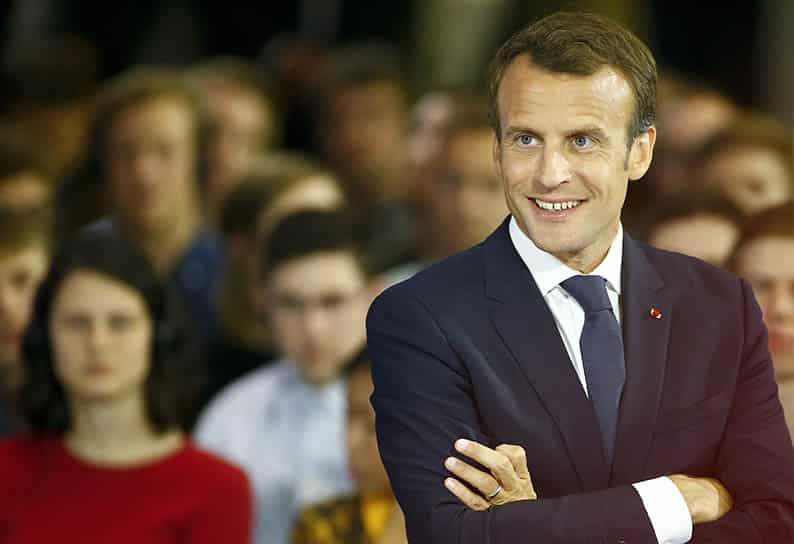 French President Emmanuel Macron is listening to students after giving a keynote speech at the university of Aachen and being awarded earlier with the Charlemagne Prize in Aachen, Germany

Germany must wean itself off the “fetish” of fiscal conservatism if it has ambitions to become a leading force for European renewal, French President Emmanuel Macron said on Thursday.

The European Union needed to integrate more closely in the face of outside threats and resurgent nationalism within its borders. That included establishing a standalone euro zone budget he said, after receiving a German prize for his contribution to European unification.

In terms of their recipe for Europe, Macron and German Chancellor Angela Merkel are broadly aligned on migration, defence and security.

But they are at odds on economics and finance, with Merkel reluctant to take steps – such as setting up a euro zone budget – that might lead to Germany carrying greater liability for other euro zone countries’ problems.

Macron said he disagreed with those who branded Germany selfish and against reform, but it was time Berlin let go of old obsessions.

“In Germany there cannot be a perpetual fetish for budget and trade surpluses, because they are always made at the expense of certain others,” Macron said, adding that a north-south divide between wealthy and poorer nations that emerged during the financial crisis should not be allowed to resurface.

Merkel, who spoke before Macron received the Charlemagne Prize – an annual award bestowed by the city of Aachen – commended his “enthusiasm… commitment (and)… courage” in support of European integration.

But while lavish in her praise for the 40-year-old Macron since he swept to power a year ago, Merkel has largely poured cold water on his ideas for reinforcing economic and monetary union.

She acknowledged that Paris and Berlin differed on how to strengthen the euro zone, but she said both countries would present a roadmap as planned by June.

“These are difficult discussions, due to different cultures,” Merkel said. “(But)… we will strengthen the euro zone, we will make it more competitive.”

New Nicosia town hall to be ready this summer