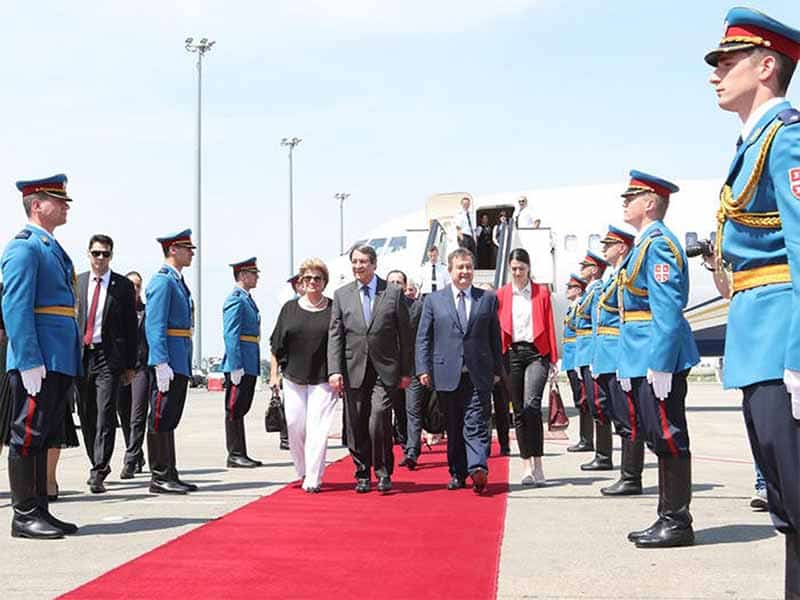 Cyprus will host the second Cyprus-Serbia intergovernmental conference before the end of the current year, President Nicos Anastasiades announced on Thursday.

The president, who is on an official visit to Belgrade with First Lady, Andri Anastasiades, underlined the close relations between the two countries as well as the strong bonds of friendship between the two peoples following a meeting with his Serbian counterpart, Aleksandar Vucic.

He said the desire for further deepening “this mutually beneficial cooperation for the benefit of our people is also considered a given by both sides”.

“In this framework, it was agreed that Cyprus will host in Nicosia, before the end of the current year, the second intergovernmental conference between Cyprus and Serbia, along with the arrangement of a business forum, with the aim to explore the strengthening of cooperation also in the economic, commercial and tourism fields as well as in other sectors of common interest,” Anastasiades said.

With regard to Serbia’s EU accession, Anastasiades expressed his conviction that in the near future Serbia would constitute part of the European Union and pledged Cyprus’ support.

“Serbia can always count on the commitment of Cyprus to act as a trustworthy friend within the Union,” he said.

Anastasiades also said that he briefed the president of Serbia about the latest developments on the Cyprus problem and expressed the determination of the Greek Cypriot side “to continue the dialogue, always under the auspices of the good offices mission of the UN Secretary General”.

The ultimate goal, he said, is “to find a solution that establishes a truly independent, sovereign state, away from any guarantees or intervention rights and with the withdrawal of every occupation army, so that we can function as a normal state as the UN Secretary General has also stated”.

On his part, Vuvic said Serbia appreciates the position and support of the Republic of Cyprus with regard to the issues that concern his country, noting that both the people of Cyprus and President Anastasiades personally have reconfirmed it on many occasions.

Vuvic expressed the wish for a peaceful solution to the Cyprus problem, noting that his country maintains over the years a position of principles on the issue.

Anastasiades also met with the Speaker of the National Assembly of Serbia Maja Gojkovic and attended a working lunch with the Prime minister of Serbia Ana Brnabic.

Foreign Minister Nicos Christodoulides had a meeting with his Serbian counterpart, Ivica Dacic.

Marx at 200: if only we had stayed hunter-gatherers