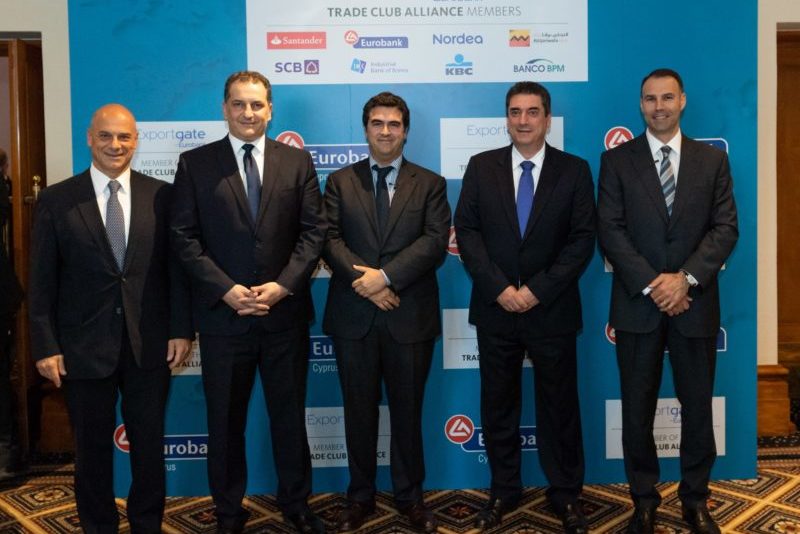 Greece’s Eurobank and its subsidiary Eurobank Cyprus aspire to help their corporate customers in exploiting export opportunities by participating in the Trade Club Alliance, a strategic partnership with Spain’s Banco Santander, the Greek lender said.

“Cypriot and Greek enterprises acquire access to over 15,000 companies (or) customers through the Trade Club Alliance,” Eurobank said in an emailed statement on Friday, a day after the network was presented to the public at an event in Nicosia. Eurobank’s “Exportgate,” introduced five years ago, served as a model in developing the Trade Club Alliance.

By 2020, the number of participating companies is expected to rise to 100,000 resulting from the participation of 15 other bank groups from currently 10 operating in 40 countries, the bank added. Eurobank’s participation offers advantages to its customers as it links Cypriot and Greek companies to the largest and most credible global trade networks.

Currently, in addition to Santander and Eurobank, the Trade Club Alliance includes Nordea, KBC, Banco BPM, IBK, Attijariwafa, SCB-Siam Commercial Bank, Abu Dhabi Commercial Bank and Credit Agricole, it said. “By the end of 2018, the club is expected to have expanded to over 50 countries, covering a wide range of target markets, such as the US, Latin America, North and West Africa, China, Scandinavia and a significant number of European Union economies”.

Eurobank’s deputy managing director Stavros Ioannou said that the Greek lender will continue to support entrepreneurship as it did in the past, also in difficult times, in exploiting opportunities abroad.

“In the new, globalised environment, cooperation with partners such as Banco Santander, creates great opportunities and important prospects for Greek and Cypriot companies in playing a key role in economic recovery,” he said. “We consider companies as driving force of extroversion and we support them not just financially, but also with a number of initiatives so that they can benefit from being networked with powerful and credible partners”.

Michalis Louis, the top executive of Eurobank’s Cyprus subsidiary, said that initiatives such as the Trade Club Alliance, are in line with the group’s decision to offer its customers “upgraded services and products, adjusted to contemporary global market trends and trade”.

Lastly, the chairman of the Trade Club Alliance, and global head of non-financial services at Banco Santander, Jon Baranhano Gavinha, said that the two lenders share a common vision of offering support to companies by providing the means, the tools and services that will allow them to reach new markets.

Israel wants 5 per cent or more of Aphrodite revenues

New sculptures to be unveiled at Geroskipou Park