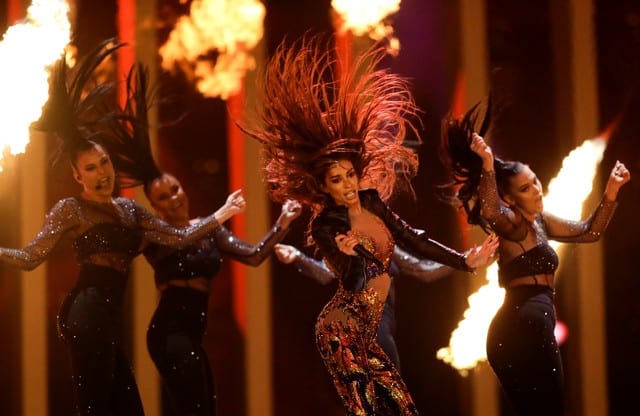 Speculations abounded the past few days – after bookmakers predicted Cyprus as the winner of this year’s Eurovision song contest – on whether the country could foot the bill of hosting such an event.

According to Betfair, Cyprus is predicted to win the contest, with Israel, France, Germany and Sweden completing the top five.

Eleni Foureira, with the song ‘Fuego’ made it to the grand final which is taking place on Saturday night at the Lisbon Arena. ‘Fuego’ will compete with 25 other songs.

Georgiades, called by a lifestyle show of TVOne to comment, said jokingly that after numerous pleas from his 10-year-old daughter who is a fan of Cyprus’ song, “I took the decision and commitment, if we win, to open the state coffers”.

The minister also recalled however, that Cyprus had raised expectations in the past of winning the Eurovision song contest but that it was not the case.

“I hope we succeed, this time,” he said.

He added that the song contest has been hosted by most European countries. “Just as they managed so will we,” he said.

Hosting such an event, he said, will yield multiple benefits for Cyprus.

“Therefore, to allay concerns, the financial part is not an issue, the state coffers will open, and that is not something I say often,” Georgiades said.

Hosting such an event doesn’t come in cheap, but it also depends on how extravagant each is willing to go.

The biggest spenders were Baku, Azerbaijan, which forked out around €54.5m in 2012, which included the construction of Baku Crystal Hall to host the event, and Copenhagen that spent in 2014 around €45m.

Sweden, which hosted the event in Malmo in 2013, however, spent less than half – around €19m – and recouped most of it through tourism spending.

The exposure each winning country receives is also thought to boost its tourism as the show is watched by approximately 180 million television viewers every year.

But the anticipated victory, reportedly also urged the head of the board of state broadcaster CyBC, Thanasis Tsokos, to head for Lisbon where the contest is taking place.

Foureira will perform on Saturday second from last.  The 31-year-old singer, dancer and fashion designer who was born in Albania now lives in Athens. She launched her musical career in 2007 when she joined the band Mystique. After the band broke up in 2009 she went solo and has since released three albums.

In September 2017 state broadcaster CyBC signed a contract with Greek-Swedish songwriter Alexandros Papaconstantinou, better known as ‘Alex P’ to write the 2018 entry for the song contest. The multi award-winning producer based in Stockholm previously worked with singers such as Anna Vissi and Jennifer Lopez.

Fuego was what he and fellow writers and composers Geraldo Sandell, Anderz Wrethov, Viktor Svensson and Didrick came up with.

Cyprus entered the Eurovision song contest for the first time in 1981 with Monika by Island, which came 6th, and has participated 34 times since. According to the official Eurovision website, “as of 2017, Cyprus holds the record for the most times participating in the Eurovision Song Contest without winning”.

The best place Cyprus reached at the contest so far was fifth; in 1982 with Anna Vissi and the song ‘Mono I Agapi’, in 1997 with Hara and Andreas Constantinou with ‘Mana mou’ and in and 2004 with ‘Stronger Every Minute’, sung by Lisa Andreas.