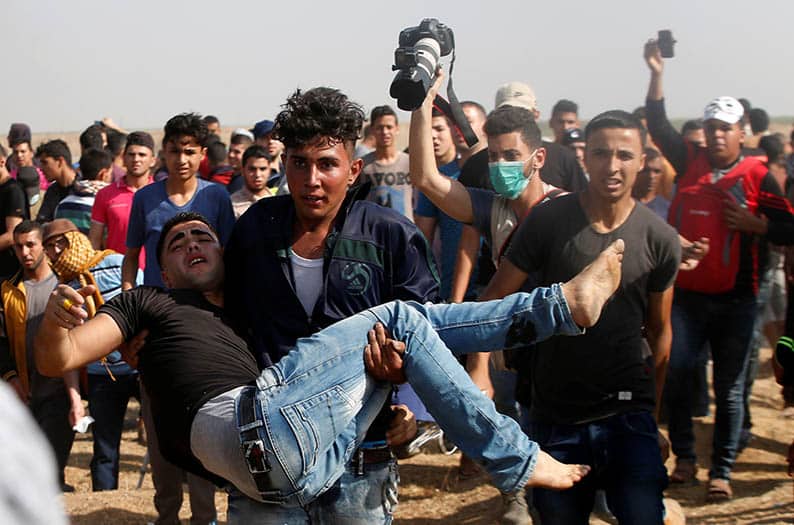 A wounded demonstrator is evacuated during a protest where Palestinians demand the right to return to their homeland, at the Israel-Gaza border

Israeli troops killed one Palestinian and wounded at least 170 protesters in the Gaza Strip, Palestinian medical workers said, bringing to 44 the number killed during a six-week protest at the Gaza-Israel border.

The man killed was protesting east of Khan Younis in southern Gaza, said medics, who said that seven other people were critically injured, including a 16-year-old youth who was shot in the face.

Organisers of the protest, called the “Great March of Return,” said they expected tens of thousands of Gazans at tented border encampments in the coming days.

The protests peak on Fridays and are building to a climax on May 15, the day Palestinians call the “Nakba” or “Catastrophe”, marking the displacement of hundreds of thousands of Palestinians in the conflict surrounding the creation of Israel in 1948.

Witnesses said Israeli soldiers used a drone to down flaming kites that protesters flew over the border in a bid to torch bushes and distract snipers.

A report by the aid charity Save the Children, published on Friday, said that at least 250 Gazan children had been hit with live bullets during the protests, among nearly 700 children injured overall. The analysis was based on data collected by the Palestinian Ministry of Health in Gaza.

Israel has been criticised by human rights groups for its lethal response to the protests. The Israeli military said on Friday its troops were defending the border and “firing in accordance with the rules of engagement”.

Protesters were “violent, burning tires and hurling rocks,” it said in a statement. Israel’s military “will not allow any harm to the security infrastructure or security fence and will continue standing by its mission to defend and ensure the security of the citizens of Israel and Israeli sovereignty, as necessary.”

The Gaza Strip, home to 2 million people, is run by the Islamist group Hamas which has fought three wars against Israel in the past decade. Israel and Egypt maintain an economic blockade of the strip, which has the highest unemployment rate in the world and has become far poorer than the other main Palestinian territory, the Israeli-occupied West Bank.

On Thursday in Gaza, Hamas leader Yehya Al-Sinwar described the protests as peaceful, and said: “We hope these incidents will pass without a large number of martyrs and wounded, and the occupation forces must restrain themselves.”

Samir, a refugee whose grandfather originally came from Jaffa, which now lies 40 miles up the coast in Israel, rolled tyres towards the area close to the fence where he later burned them.

“My grandfather told me about Jaffa, where he came from, he said it was the bride of the sea, the most beautiful of all. I want to go back to Jaffa,” he said.

“Killing me will not change anything, Jaffa will remain Jaffa. They need to kill every last one of us to change the facts.”

Traffic changes due to works on Limassol-Paphos motorway