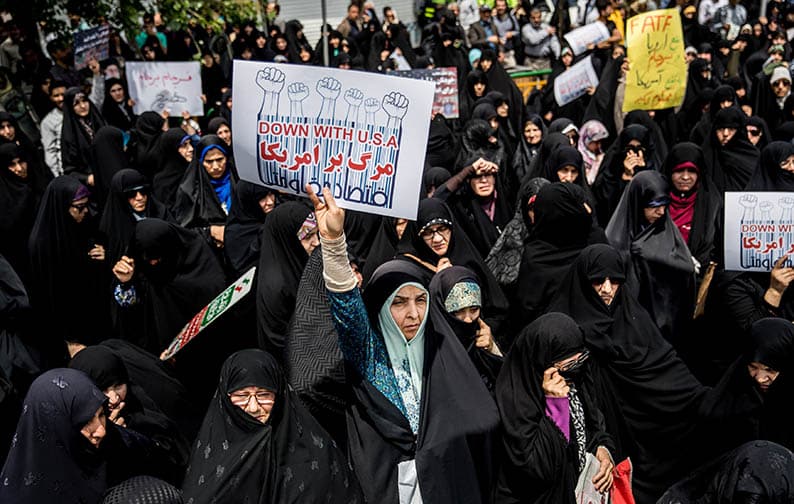 Iranian women gather during a protest against US President Donald Trump's decision to walk out of a 2015 nuclear deal, in Tehran

Iranian Supreme Leader Ayatollah Ali Khamenei on Saturday called for unity among Muslims and efforts towards scientific advancement, saying this would make it impossible for “enemies” such as the United States to dominate Islamic countries.

Shi’ite Iran faces off with Western-allied Sunni Saudi Arabia for influence in the Middle East. The two regional powers back opposing sides in the conflicts in Yemen and Syria as well as rival political groups in Iraq and Lebanon.

“Today, every movement that leads to mutual understanding of Islamic groups and sects is a good thing, and this gathering is an example of the movement for the unification of the Islamic nation,” said Khamenei in remarks carried by his official website.

“The scientific movement must accelerate and the Islamic nation must once again reach heights of science and civilization so that the enemies of Islam and the Americans cannot order around the heads of Islamic countries,” Khamenei told a meeting about Shi’ite contributions to sciences.

Iran frequently calls for Islamic unity to help Tehran in its confrontation with its arch-foe, the United States.

Washington on Tuesday pulled out of a nuclear deal with Iran, a move accompanied by the threat of penalties against any foreign firms doing business in Iran.

Tehran denies seeking atomic weapons and says its nuclear programme is for peaceful uses in areas including electricity, agriculture and medicine.