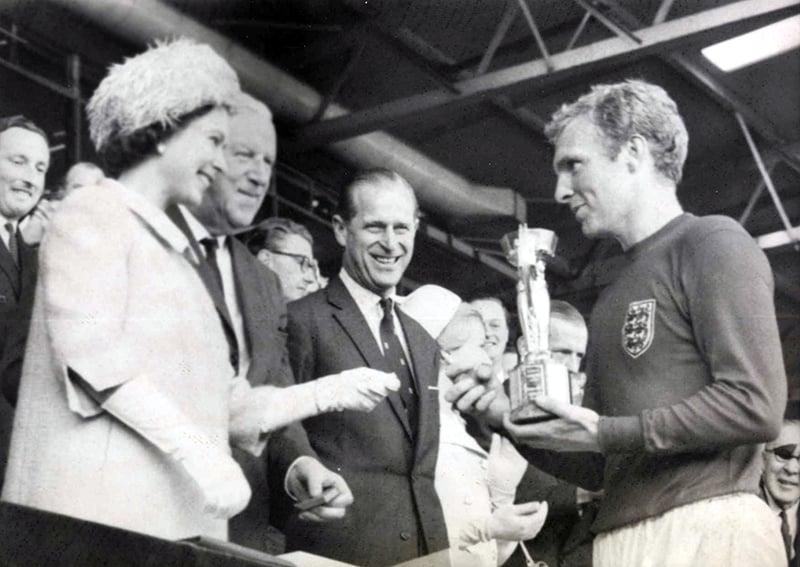 Sixteen years after first competing at the World Cup, England hosted the tournament in 1966, with coach Alf Ramsey famously predicting that his side would go on and lift the trophy.

Off the pitch, the tournament had an unusual hero – a dog called Pickles. Before the event got underway, the Jules Rimet trophy was stolen from an exhibition display. A nationwide hunt took place and it was later discovered wrapped in newspaper as the dog sniffed under some bushes in London.

The FA commissioned a replica in case the original cup was not found in time.

Angry at not having a direct route guaranteeing one African team at the finals, everybody from the continent decided to withdraw in protest.

Portugal, making their first appearance at the World Cup, won all their first round matches and put the final nail in defending champions Brazil’s coffin beating them 3-1 on the last match day of the group stage.

Star player Pele was repeatedly and violently fouled throughout the tournament.

Brazil’s elimination was a huge upset and it meant the end of the national team careers of several great names as Garrincha, Bellini and Orlando.

For Portugal, a new star was born in the form of Eusebio.

North Korea also did well on their debut, beating former champions Italy in a huge upset before going down 5-3 to a Eusebio-inspired Portugal in the quarter-finals. The North Koreans, the first Asian team ever to reach the knockout stage, had raced into a 3 goal lead in the opening 25 minutes against Portugal before Eusebio, the tournaments eventual top scorer scored 4 times.

The tournament also featured an official logo for the first time and World Cup Willie, the mascot in 1966, was the first World Cup mascot, and one of the first mascots to be associated with a major sporting competition. World Cup Willie was a lion, a typical symbol of the United Kingdom.

Drug testing was also introduced for the first time but it was 8 years later that a player (Ernest Jean-Joseph of Haiti) was banned for failing the test.

The 1966 World Cup final at Wembley Stadium between hosts England and West Germany had an attendance of 98,000, including the Queen and Duke of Edinburgh, and was watched by the largest television audience (32.3 million) of all time in the country.

West Germany threatened to ruin the party, opening the scoring through Helmut Haller after only 12 minutes, but Geoff Hurst equalised four minutes later.

The Three Lions looked set for the title when Martin Peters put England ahead after 78 minutes, but Wolfgang Weber made it 2-2 with virtually the last kick of the 90 minutes, sending the World Cup final into extra time for the first time in the tournament’s history.

It didn’t take long for Hurst to score again – his 98th minute shot hit the crossbar, bounced down onto the goal line, and was awarded as a goal.

In the closing seconds, as England broke upfield, legendary British BBC commentator Kenneth Wolstenholme observed that: ‘Some people are on the pitch. They think it all over.’; At that very moment Hurst burst down the left and rifled the ball into the top corner. ‘It is now!’; Wolstenholme added.

His description of the match’s closing moments has gone down in history.

Hurst remains the only man to score a hat-trick in the World Cup final.

England’s total of eleven goals scored in six games set a new record low for average goals per game scored by a World Cup winning team. The record stood until 1982, when it was surpassed by Italy’s twelve goals in seven games; in 2010 this record was lowered again by Spain, winning the Cup with eight goals in seven games.

Iran urges Muslims to develop sciences to shake off US

Public Relations: An ace up a company’s sleeve.