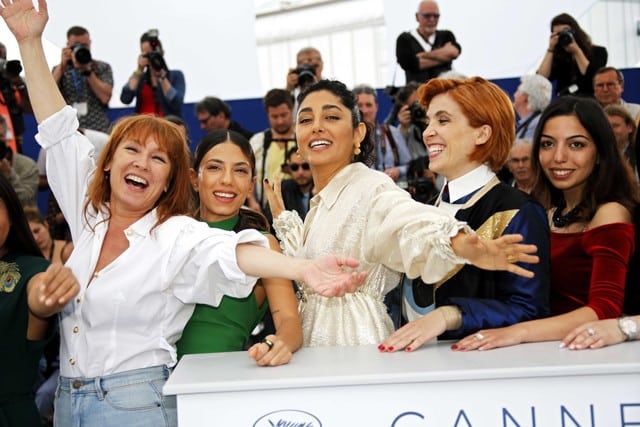 “When they hear our female voices, they tremble with fear,” says the heroine of “Girls of the Sun”, a feminist war movie that captured the zeitgeist at a Cannes Film Festival dominated by the issue of women’s rights.

Based on the true story of Iraqi women who took up arms against Islamic State after escaping enslavement, a female battalion leads an attack on the jihadists while their brothers in arms prefer to wait for U.S. air strikes.

The reason their enemies fear them, we learn, is that they believe if they are killed by a woman, they will not go to heaven as a martyr.

The story, by French director Eva Husson follows Mathilde, a reporter embedded with the fighters who learns the horrific back-story of their leader Bahar, played by “Pirates of the Caribbean” star Golshifteh Farahani.

The film premiered to rapturous applause at Cannes on Saturday night, just after Cate Blanchett led a demonstration by female actors, directors and producers on the red carpet to support the campaign for women’s rights after the sex abuse scandals that shook the movie industry last year.

While the film’s setting is kept vague, the story was inspired by Islamic State’s attack on members of the Yazidi faith in Sinjar, northern Iraq, in 2014, when they killed the men and traded the women and girls as sex slaves.

The reporter Mathilde is a fictionalised version of Marie Colvin, who was killed in Syria in 2012, and played by Emmanuelle Bercot who, complete with eye patch, bears a striking resemblance to the American journalist.

“It talks of the need for representation, the representation of women in cinema, representation that we as women owe to ourselves to tell our stories,” Husson, 41, told a news conference, calling the MeToo movement that emerged after the sex scandals “a great moment on the history of cinema”.

“It is all just starting to gain momentum. I think we can all feel the rumbling, the coming to the boil of the narrative voice of women.”

Some critics found “Girls of the Sun” contrived. Variety said it was “well-intentioned yet cliché-riddled lunge at the tear ducts,” while The Guardian’s Peter Bradshaw called it “heartfelt, forthright and muscular”.

The film is in competition for the Palme d’Or which will be awarded on May 19.

‘Trust me on Brexit’, UK PM May says as ministers squabble