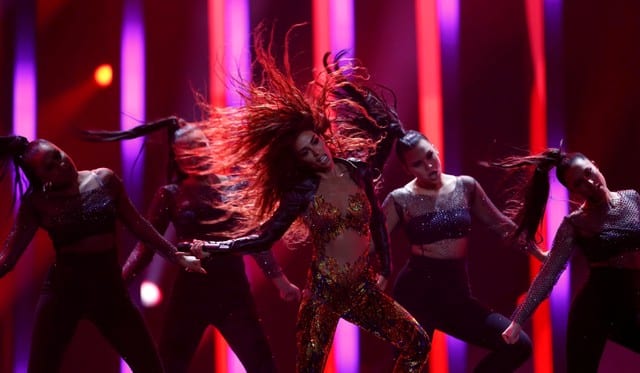 After a week of hype and excitement in Cyprus overcoming in as the bookies’ favourite to win the 63rd Eurovision Song Contest in Lisbon, Portugal on Saturday night Eleni Foureira despite an energetic performance of the song ‘Fuego’, failed to clinch first place in the popular show, coming in second to Israel.

President Nicos Anastasiades tweeted early on Sunday after the contest:  “Bravo and thank you @foureira_eleni ! #Cyprus in the 2nd place @Eurovision for the first time. Congratulations for the win of #Israel. All Europe echoes the sound of music tonight”.

Foureira garnered a total of 436 votes, 183 from the judges and 253 points from the public vote. It was the second highest public vote after Israel’s 373, which took its total to 529. Austria was third with 342 points in total.

She tweeted afterwards: “Thank you Europe for your love …  congratulations my girl @NettaBarzilai”

Responses on Twitter were  supportive with numerous Spaniards telling her she was Spain’s favourite and dozens of others tweeting that she deserved to win,  one such comment even coming from an Israeli poster. Another tweeter commented with the handle ‘Cyprus was robbed’.

‘Fuego’ took Cyprus the closest it’s ever been to winning in the 35 years of participating in Eurovision.

At one point early in the country voting, Foureira was in first place with a spate of 12 points coming from six countries, Belarus, Malta, Spain, Sweden, Ireland and of course, Greece. She received 10 points each from the Former Yugoslav Republic of Macedonia and from Albania, the Greek singer’s birthplace.

‘Fuego’ was written by Alex Papaconstantinou (better known as Alex P). A Spanish version of the song was also released on Friday.
Foureira appeared in the same sequined bodysuit as the semi-finals and again during her final chorus, flames shot from the stage.

Betting agencies were on Saturday still placing Foureira as the sure favourite to win. Bars hosted Eurovision parties in Larnaca, Nicosia, and Limassol while food outlets with delivery services did a roaring trade in takeaway specials for those who stayed home.

On Friday, the usually parsimonious Finance Minister Harris Georgiades said that he would open the state coffers if Foureira won.

Cyprus entered the Eurovision song contest for the first time in 1981 with Monika by Island, which came 6th, and has participated 34 times since. According to the official Eurovision website, “as of 2017, Cyprus held the record for the most times participating in the Eurovision Song Contest without winning”.

The best place Cyprus reached at the contest until Saturday night was fifth; in 1982 with Anna Vissi and the song ‘Mono I Agapi’, in 1997 with Hara and Andreas Constantinou with ‘Mana mou’ and in and 2004 with ‘Stronger Every Minute’, sung by Lisa Andreas.

Woman 25, dies after shelves topple over at restaurant storeroom