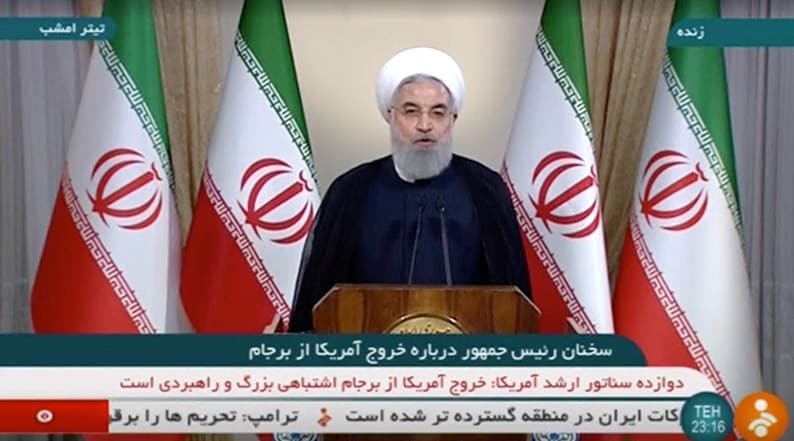 File photo: Iran's President Hassan Rouhani speaks about the nuclear deal in Tehran, Iran May 8, 2018 in this still image taken from video.

The extraordinary thing is that there is no Plan B. If Donald Trump’s re-imposition of American sanctions on Iran does not cause President Hassan Rouhani’s government to buckle at once (which is almost unimaginable), there is nothing else he can do short of going to war with the country. And he couldn’t even win that war.

Iran is entirely within its rights in condemning Trump’s action. All the other signatories to the deal that hobbled Iran’s nuclear programme – Britain, France, Germany, Russia and China – agree that Tehran is in full compliance with its terms, as do the United Nations, the International Atomic Energy Agency, and US Secretary of Defence Jim Mattis.

All of Trump’s complaints about the deal are about things it was never intended to cover, and it does not contain those things because Iran would never agree to terms that effectively gave the United States control over its foreign policy. If Trump wants to try to negotiate that kind of deal anyway, it is not necessary to terminate the nuclear treaty in order to do so.

But it’s a mistake to apply rational analysis to Trump’s action, because this was an emotional decision, not a rational one. It is part of his obsession with expunging every single achievement of the Obama administration: healthcare, the opening to Cuba, the Trans-Pacific Partnership trade deal, the Paris climate treaty, and now the Iran nuclear deal.

You can, however, apply rational analysis to every other player’s reaction to Trump’s tantrum, starting with President Rouhani. He will try very hard to keep the deal alive because his own political fate depends on it. If he cannot succeed, the Revolutionary Guard and other hard-line nationalists will gain the upper hand domestically and his entire reform policy will be paralysed.

Rouhani probably only has a few weeks to get public commitments to continue trading with Iran from the other parties to the deal, and that will require them to defy the United States. Trump’s declaration on Monday only requires American banks and companies to stop trading with Iran within 180 days, but the US may also apply so-called ‘secondary sanctions’ against foreign companies that trade with Iran.

These ‘secondary sanctions’ may actually be illegal under international law, but that has not stopped the US in the past (Cuba, Venezuela, etc.) and it won’t do so now. You can count on Russia and China to push back if the US blackballs their companies for trading with Iran, but will the British, French and German governments also do so? Even if it risks splitting the Western alliance?

Probably not, in which case the deal really will be dead. Rouhani would remain in office for the remainder of his term, but the hard-liners would be in charge. That doesn’t mean that Iran will start working on nuclear weapons right away, however, because it can’t.

In obedience to the deal, it has destroyed the core of a reactor that could have produced weapons-grade plutonium, placed two-thirds of its centrifuges (for enriching uranium) under international monitoring, and eliminated 97 per cent of its stockpile of enriched uranium. It would take a long time to get started again.

The immediate impact is more likely to be seen in a tougher approach in Syria, where Iranian troops (sent to aid the government side in the civil war) are bombed by the Israelis practically every week. On Thursday it responded by launching a rocket attack on Israeli army bases in the Golan Heights, prompting one of the heaviest Israeli barrages in Syria since the conflict there began in 2011. But if Iran shoots a couple of those Israeli planes down, then the fat would really be in the fire.

For several years now, the main foreign policy goal of America’s two main allies in the Middle East, Israel and Saudi Arabia, has been to draw the United States into a war with Iran. Therefore they have to provide the hawks in the Trump administration (Pompeo, Bolton, et al.) with a plausible pretext for starting the war, and a couple of downed Israeli planes would do nicely.

If it were just an attack on Iran by the US, Israel and Saudi Arabia, it would not be of earth-shattering importance. They would probably lose a lot of planes, since Iran now has good air defences, but none of them could or would do a ground invasion.

Iran is a country the size of Alaska, two-thirds of it is mountain or desert, and it has 80 million people, lots of industry and good science and technology. Invading it would make the Vietnam war look like a tea party. So any ground fighting between Iran and its enemies would be more likely to happen in the countries between them: Syria and Iraq.

You could be forgiven for thinking that both Iraq and Syria deserve a break from war by now, but they may not get it. And the most worrisome thing is that there are both Russian and American troops on the ground in these countries.

Gwynne Dyer’s new book, Growing Pains: The Future of Democracy (and Work), was published last month by Scribe in the United States, Canada, the United Kingdom, Australia and New Zealand