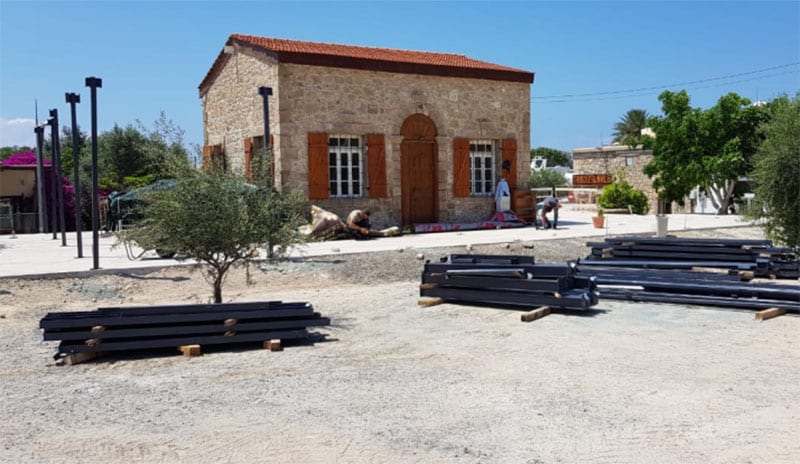 Muslims in Paphos are calling on authorities to speed up ongoing upgrading work in the area of the Paphos Mosque, which has almost ground to a halt, saying it is affecting their ability to pray and gather together at special times, including Ramadan which will start on Wednesday.

A member of the committee of the mosque who only wished to be identified as Ali, said that despite promises by officials that work would be completed in two months, nine months on work seems to have almost stopped.

“We have even said that we will pay for the mosque to be fixed ourselves, but the authorities have said no. I don’t think the company responsible has any money, they have problems and during Ramadan the mosque will be full and used 24 hours a day,” he told the Cyprus Mail.

Work in the area is tied up with unifying and upgrading the archaeological sites in Kato Paphos, including the much talked about walkway over the main road, which will connect Fabrica Hill with other sites of interest.

Paphos councillor Andreas Chrysanthou said that work had been affected in the area, as the responsible company had “run out of money.”

“We (the council) have heard that they are on their way to bankruptcy and are about to go into administration. We have no jurisdiction over this, it’s down to the central government and they have to sort it out,” he said.

In 1934 a Turkish fisherman converted one room of his house into a place of worship. Following a wave of Muslims to Paphos as political (and other) refugees, the entire house was years later converted into a place of worship, after permission was given by Health Minister Christos Patsalides, Chrysanthou said. It is now referred to as the Paphos mosque.

However, Paphos’ main mosque some distance away in Moutallos has for years been out of action despite work to stabilise the minaret tower.

Ali, who has lived in Paphos for 18 years, said that Muslims have been using the area in Kato Paphos for some time and already regard it as their mosque. He said that there are currently around three thousand Muslims living in Paphos.

“I want to live a normal life with respect, like any other Muslim. It doesn’t matter where you come from. It is important that we can pray when we need to. At present there isn’t even enough space for men and women to worship separately.”

The space would become extremely cramped for the month long Ramadan as around 1,000 people are expected at the mosque each day.