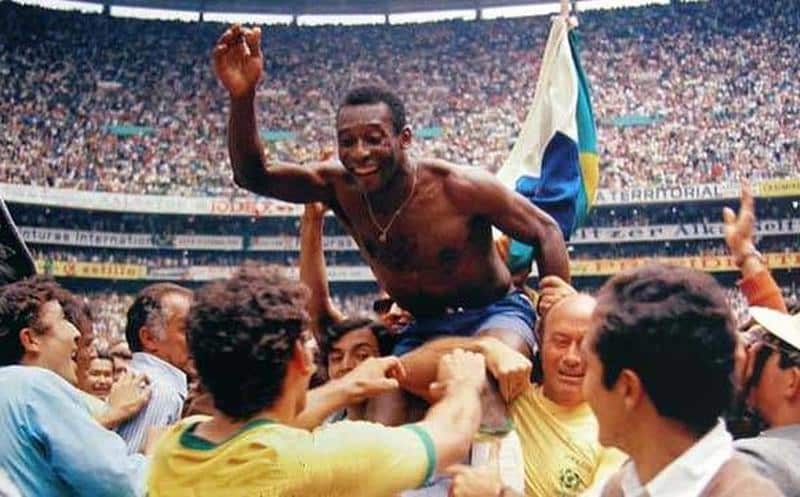 The 1970 World Cup was hosted by Mexico, despite worries over the high altitude and high temperatures, coupled with midday kick-off times

The tournament set-up was the same to the one four years earlier. Sixteen teams – four groups of four with the best two teams in each group through to the quarter-final knock-out stage.

FIFA introduced yellow and red cards plus substitutions for the first time.

Nobody was sent off during the three-week event, making 1970 one of only two World Cups (the other being 1950) to be held without a player being dismissed.

Defending champions England had their own problems before the tournament got underway.

Influential captain Bobby Moore was accused of stealing a bracelet during the team’s training camp in Colombia and was forced to stay in the country while his team-mates travelled to Mexico.

The star defender was released due to lack of evidence and joined the England party several days later.

England faced favourites Brazil in Group C, with the match now regarded as one of the finest in World Cup history

Jairzinho scored the only goal as Brazil won 1-0, but the game went down in history for the so-called ‘save of the century’ by goalkeeper Gordon Banks from a Pele header.

The 1970 World Cup is also remembered for the semi-final between Italy and West Germany also known as the ‘Game of the Century’.

Five goals were scored in extra time with the two sides level at 1-1 after 90 minutes. Franz Beckenbauer, also known as ‘Der Kaiser’, had to play the last 30 minutes of the game with his shoulder in a sling after he dislocated it  and his team had already made its two substitutions.

With advancements in satellite communications, the tournament also set a new record TV audience for the World Cup as games were broadcast live around the world and, for the first time, in colour.

FIFA had decided that the first country to win the tournament three times would be given permanent possession of the trophy, so there was even greater pressure on the two teams than usual.

Pele opened the scoring with a header after 18 minutes but Roberto Boninsegna took advantage of some poor Brazilian defending to equalise before half-time.

In the second half, Gerson’s powerful shot gave Brazil a 2-1 lead before Jairzinho added a third.

The game will always be remembered for Brazil’s fourth though, as Carlos Alberto finished off a mesmerising team move by scoring one of the greatest goals in World Cup history.

Victory ensured Brazil became the world’s most successful national football team, overtaking both Italy and Uruguay, who each had two titles.

Pele ended his World Cup playing career as the first and so far the only three-time winner.

Above all, attacking football had reaped its reward, and the crowd had the opportunity to laud Pele, who was carried shoulder-high, bare-chested and emotional, from the pitch.

By overcoming defensive specialists Italy, Brazil showed that enterprise, fantasy and attacking play were the way the game should be played.

Overall, despite the poor conditions, the 1970 World Cup was a glorious triumph of the creative over the destructive.

Erdogan will seek to control economy after June elections

Your research paper in just 60 minutes