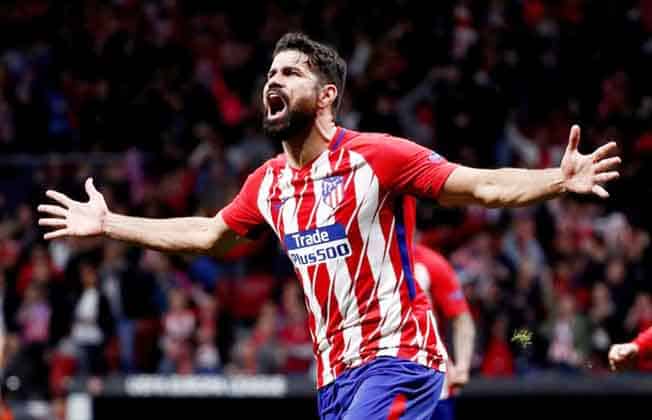 Diego Costa’s return to Atletico Madrid has not been plain sailing, but it rarely is with the former Chelsea striker who has helped his Spanish club within reach of their third Europa League trophy.

Since rejoining his former side in September, and after sitting out three months because ofAtletico Madrid’s ban on registering players, Costa has only three league goals in 14 appearances.

One of them came on his return to La Liga action, netting in a 2-0 win against Getafe on January 6 before earning himself a red card for celebrating too wildly.

However, he also scored in the 1-0 victory in the second leg of the Europa League semi-final against Arsenal, earning Atletico a place in Wednesday’s final (9.45pm) and ending Arsene Wenger’s last hopes of European glory with the Gunners.

Now the striker is looking to fire Atletico to victory against Olympique de Marseille in Lyon, with a personal score to settle, too. His previous appearance in a European final was abruptly ended by injury as Atletico lost 4-1 to Real Madrid in the 2014 Champions League final.

Costa went into that derby clash in Lisbon carrying a hamstring injury and even used horse placenta as part of his treatment before the game, but it didn’t work and he was substituted after nine minutes.

After helping to eliminate Arsenal, Costa was hailed by coach Diego Simeone, who said these performances were the reason Atletico shelled out 57 million euros to bring the combative player back from Stamford Bridge.

“Costa came back here for nights like this; to be important, to lead from the front,” said Simeone.
“This side needs an aggressive striker, a striker with anger – and that’s exactly what he is.”

Even though Costa’s form has varied over the past four months, he forms an undeniably dangerous attacking partnership with Antoine Griezmann, who set up Costa’s goal against Arsenal.

Costa might be able to return the favour by helping the Frenchman to win his first major trophy at Atletico before a potential summer move to Barcelona. Rumours have been swirling for some time that Griezmann will sign for Barca.

“I love working with him and with the team.” said Costa.
“He’s thinking about winning the trophy. All the forwards have won something with this club over the past few seasons and he wants to leave his mark here, too.”

The abiding memory of Dimitri Payet’s last appearance in a major final was a crunching tackle which forced a tearful Cristiano Ronaldo out of the Euro 2016 clash between France and Portugal.

Assuming he recovers from a minor injury, the 31-year-old will have a chance to put that memory behind him when he plays for Marseille against Atletico.

Payet has been inspirational in Marseille’s run to their first European final since 2004 when they finished as runners-up to Valencia in the old UEFA Cup.

The Reunion Island-born player has scored three goals and provided six assists in the knockout stages and given himself a fighting chance of being recalled by France for the World Cup in Russia.

“He’s been at peak physical strength since January 2018, so he’s been able to offer the full extent of his talents,” said Marseille coach Rudi Garcia.

“He’s been a role model as captain. He’s often managed to raise the overall level of the team in the Europa League and that has enabled us to reach the final.”