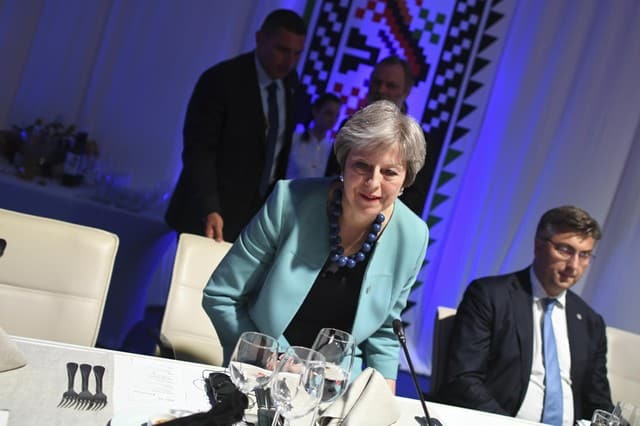 British Prime Minister Theresa May arrives for an informal dinner ahead of a summit with leaders of the six Western Balkans countries in Sofia, Bulgaria on Wednesday

British Prime Minister Theresa May defeated a bid by the opposition Labour Party on Wednesday to force her government to disclose details of its two Brexit customs proposals, thwarting efforts to embarrass her divided team.

May’s Conservative Party defeated Labour by 301 to 269 votes, handing the government a victory in a parliament equally divided over the terms of Britain’s divorce from the European Union and their future customs arrangements.

Labour used a rare parliamentary device called a “humble address” to try to force the publication of “all papers, presentations and economic analysis” on the two options which have split May’s government and all but stalled Brexit talks.

The government had already moved late on Tuesday to rebuff Labour by saying it would soon publish its vision for Brexit, setting out over more than 100 pages its plans for everything from fishing to finance to security cooperation.

May is under pressure at home and in Brussels to move forward with talks on Britain’s divorce from the EU, but is struggling to unite her cabinet of ministers around a single customs proposal to bring to the negotiating table.

Her cabinet office minister David Lidington told parliament the release of such documents as requested by Labour would undermine the need for ministers to have “frank discussions”, the ability of officials to give advice and the privacy needed to prepare for negotiations.

“It would not be in the national interest to release information that will form part of our negotiating position,” he told parliament to jeers from opposition lawmakers.

Earlier on Wednesday, Labour leader Jeremy Corbyn called on May to step down and allow his party to negotiate a “comprehensive customs union” with the EU, something opposition lawmakers say is gaining support in parliament.

But May has yet to swayed by the growing calls for such a union with the EU.

Instead, she has pressed on with work on the two options – a customs partnership which would see Britain collect tariffs for the EU, and a streamlined customs arrangement, which would use technology to maintain trade flows.

She has divided most of her cabinet into two groups to try to improve the two proposals and come to a conclusion over which is best placed to prevent a return to a hard border with EU member Ireland and ensure trade moves as freely as possible.

They have been meeting regularly, but on Tuesday the wider, so-called Brexit war cabinet again did not reach agreement. Ministers have suggested that any decision could take weeks.

EU negotiator Michel Barnier said on Monday that no significant progress had been made in the Brexit talks since March and warned London that time was running out to seal a deal by October to prevent Britain crashing out of the bloc.

By promising to publish a White Paper, a policy document that sets out proposals for future legislation, next month, the government hopes to set out its stall before the next summit of EU leaders on June 28-29. But without an agreement on customs, those plans would be incomplete.

It is “an opportunity to set out clearly to both a domestic and an EU audience the reasoning behind our approach”, Brexit minister David Davis said.