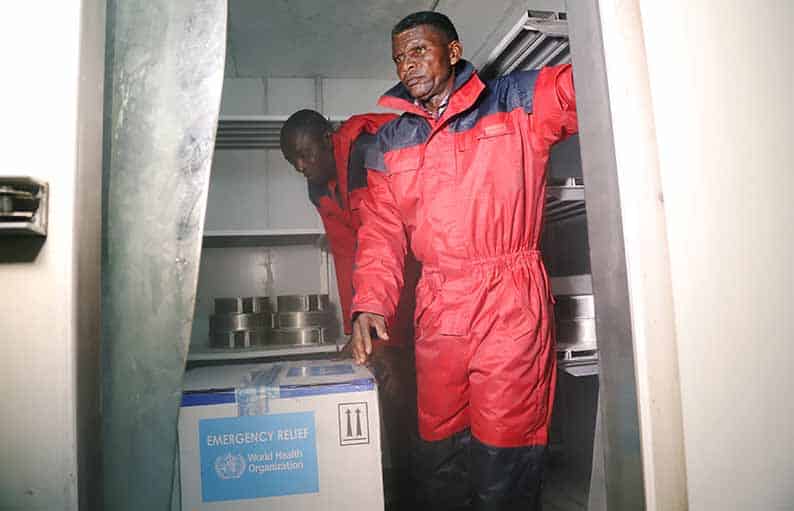 Congolese and U.N. officials were racing to prevent a runawayEbola outbreak in Congo on Thursday, working out the logistics of keeping newly arrived vaccines well below freezing in a steamy region on the equator with unreliable power.

This is Democratic Republic of Congo’s ninth epidemic since the disease was identified in the 1970s, but also its most alarming because of the risk of transmission via regular river transport to the capital Kinshasa, a city of 10 million.

An experimental but highly effective vaccine is being deployed against the virus, with health workers being vaccinated first, but it needs to be kept 80 degrees Celsius below freezing in a humid region where daytime temperatures hover around 30.

“For now, the cold chain is guaranteed at -80 degrees until Kinshasa,” Health Minister Oly Ilunga told Reuters. “There is a fridge that will be prepared (on Thursday) … in Mbandaka and that will be at -80.”

“This vaccine is no longer experimental. The effectiveness has been proven and validated,” he added. “Now that we are facing the Ebola virus we must use all the resources we have.”

The WHO expert committee will decide whether to declare a “public health emergency of international concern”, which would trigger more international involvement, mobilising research and resources, Lindmeier said.

Emergency Committees have been set up to advise on past outbreaks such as the 2016 Zika epidemic in Latin America and the huge West African Ebola outbreak that killed at least 11,300 people in Guinea, Sierra Leone and Liberia from 2014 to 2016.

Mindful of criticism it received for being too slow during that epidemic, when it took months to convene an Emergency Committee, the WHO is moving fast on Congo’s latest outbreak.

The committee can advise WHO Director General Tedros Adhanom Ghebreyesus on actions to be taken by Congo and other countries to try to halt the international spread of disease without unduly interfering with trade or transport.

The Kinshasa government reported the outbreak on May 8, one day after two samples tested positive, and within days the WHO was sending experts, preparing a helicopter “air bridge” to the site, and planning a vaccination campaign.

There have already been 44 suspected, probable or confirmed cases of Ebola, and 23 people have died. Potentially most worrying is a confirmed case in the city of Mbandaka, which has a population of about 1 million.

“The arrival of Ebola in an urban area is very concerning and WHO and partners are working together to rapidly scale up the search for all contacts of the confirmed case in the Mbandaka area,” said WHO Regional Director for Africa Matshidiso Moeti said in a statement.

Mbandaka is also connected via the Congo River to Kinshasa, a crowded city where millions live in unsanitary slums not connected to a sewer system.

Several public boats a day head from there downstream over the river to the capital. They are so overloaded with people that they sometimes topple over, toilets are filthy and water for washing absent.

The other Ebola cases were spread across sites in remote areas where the disease might not travel quickly.

Already the WHO has warned that there is a “moderate” regional risk because the disease could travel along the river to Central African Republic and Congo Republic. But it has said the global risk is low because of the remoteness of the area and the rapid response launched so far.

Even if the logistics of the ‘fridge bridge’ prove easy enough to overcome, “the vaccine is not a magic bullet,” Peter Salama, WHO’s medical emergency programme head told Reuters this week, especially since health workers have been infected.

“Having healthcare workers infected is usually a ‘canary in the mine’ for potential amplification,” he said.

Cyprus to set up coastguard with Greek help