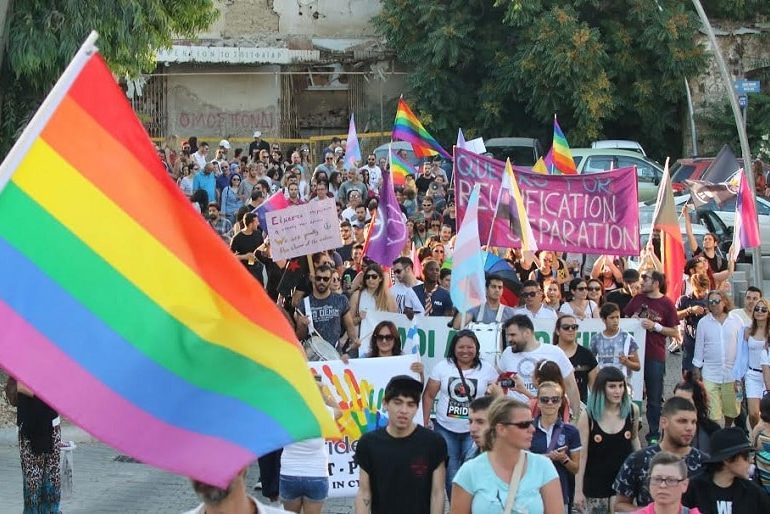 The Pride Festival will take place on June 3 in Nicosia

FOR the first time events will be held in Paphos to mark Cyprus’ fifth Pride Festival, currently underway.

Accept LGBT Cyprus’ representative in Paphos, South African Cypriot Zac Theophanous, is organising the events which will see the rainbow flag hoisted above the municipalities of both Paphos and Geroskipou on May 25.

“This is the first time we are doing this in Geroskipou and the mayor and municipality have been very supportive,” he told the Cyprus Mail.

Last June, Theophanous raised the rainbow flag for the first time at Paphos town hall, ahead of the Cyprus Pride Parade which is held each year in Nicosia. The Pride Festival 2018 is under the auspices of President Nicos Anastasiades and the municipality of Nicosia.

“These events are all important and the flags are symbolic as they show that we do have a presence in the town and that both municipalities support diversity and are all inclusive places,” he said.

Cyprus Pride events with the 2018 hashtag ‘#makethechange’, started on May 12 and will run until June 3, culminating in the parade in Nicosia which saw around 5,000 participants last year, according to president of Accept LGBT Cyprus, Nicholas Trifon.

“We are expecting more people this year and for the first time this year we have a gold sponsor who isn’t afraid to be open in their support for us. Whether it’s an individual, business, organisation or municipality, all of this support is important as its people taking a stand for human rights and equal rights, it all creates a greater awareness,” he said.

The march takes place in Nicosia municipal garden on June 3 at around 6pm after kids’ activities at 3pm and speeches at 5pm.

This year Pride aims to create awareness about the difficulties facing the transgender community in particular, and a transgender activist speaker from Athens will be one of the participants speaking about legal gender recognition.

“We are trying to pass this through parliament, so it is very relevant,” he said.

Support for the LGBT community in Paphos is increasing and monthly rainbow meetings are now being held in both Paphos and Geroskipou and are co-ordinated by Theophanous.

On Sunday May 20, at the Iris counselling centre in Geroskipou there will be two lectures on homosexuality and the LGBT community in general. They are open to the public.

There will also be a ‘human library’ where participating volunteers will tell their stores. One is an HIV positive man who will openly talk about his HIV status.

“This is important, in this way we can educate people to dispel the myths and understand the realities and educate about HIV and how not to get it.”

He stressed that nowadays, an HIV positive diagnosis doesn’t have to be linked to death.

“Being HIV positive is not a death sentence anymore,” he said.

On Saturday May 26, a ‘donated’ wall of the old army base in Geroskipou will see a stencil artist create a design, participants can then paint inside the stencil.

“It’s all about anti- discrimination, anti-homophobia, anti-racism and women’s rights. We will beautify the wall from 8am and carry on all day.”

Our View: Drop drug prices and people won’t buy them in north