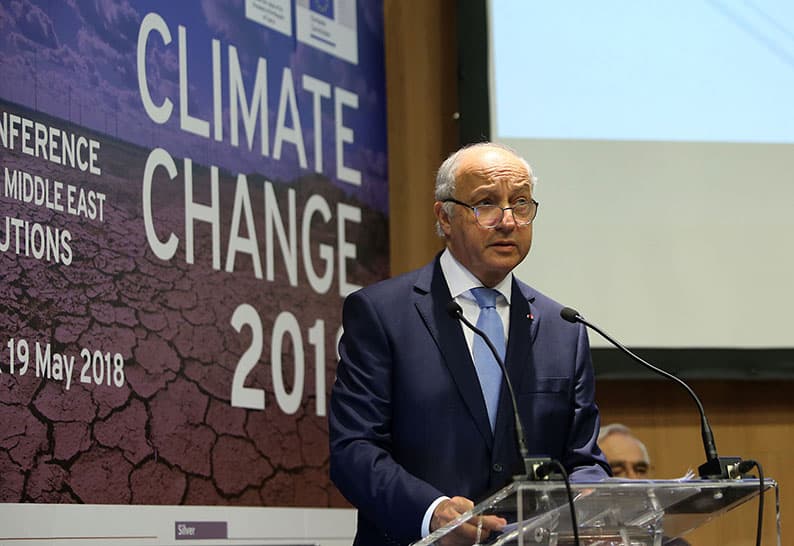 Plans are underway on establishing a station in Cyprus to monitor the effects of climate change, it emerged on Friday as Nicosia hosted the international conference on climate change in the Mediterranean and the Middle East: challenges and solutions.

With scientists from 35 countries, the two-day conference aims to address the scientific basis of climate change in the region and its various impacts and challenges on issues of health, water, food, tourism, migration and aims to look at mitigation and adaptation strategies, policy challenges and governance

His speech, read out by Education Minister Costas Hambiarouis, outlined Cyprus’ national target for greenhouse gas emissions –  a 24 per cent reduction compared with 2005 levels.  To achieve this, the focus on the development of cleaner fuels, such as natural gas, and the development of policies and measures to further save energy through renewable energy sources.

An important challenge is the reduction of emissions in the transport sector, which accounts for about 25 per cent of all emissions in Cyprus, he added while other policies were focusing on agriculture, forestry, and waste management.

They are aimed to “decrease our dependency on fossil fuel imports, enhance our competitiveness, and create new jobs while transitioning to a low carbon economy,” he said.

Former Prime Minister of France Laurent Fabius, who presided over the success of the COP21 Paris Agreement, gave the opening address at the conference saying the world was in a race against time regarding climate change as the deterioration was worse and faster than what could have been imagined.

Fabius told attendees 2017 was the warmest year on record. “The average global temperature has already been through a 1C increase in 2015, in comparison to pre-industrial levels, and 1.5C could be reached in the 2030s and maybe even before. Two degrees could be passed by 2050, that is 50 years before our intended target”.

In addition, he said last year’s emissions have been on the rise after having stayed stable for a while. Despite efforts of the international community, current state pledges cover no more than a third of emissions with temperatures rising by two degrees.

“In short, the deterioration is worse and faster than what we could have imagined. The figures regarding oceans, forests and pollution and in more general the environment, are critical and the red alert is on.”

General Secretary of the World Meteorological Organisation, Petteri Taalas told the Cyprus News Agency there is an urgency to start implementing the Paris Agreement and expressed hope that the conference in Nicosia would motivate the policy makers to take more action.

Cyprus will have a role to play, by building up a new station to monitor the effects of climate change, he said.

“We have to strengthen the scientific basis and we are discussing how to improve the observing systems of Cyprus. There is a plan to establish a new observing sighting in Cyprus to monitor the greenhouse gases.”

Referring to the region, Taalas pointed out that the Mediterranean is one of those regions to suffer the most because of climate change.

The effects of climate change, he said, are visible, noting the higher temperatures, the evaporation and the even more frequent drought.

This trend, he noted, will continue.

Taalas said that this trend will have a great impact on the society as well.

“This will mean great difficulties for agriculture and it may have an impact on tourism if temperatures are too high and nature is not so green. This is of concern”.

He recalled the refugee problems because of intensified drought in the Middle East and African countries.

Noting that drought in Africa will be increasing and at the same time population in Africa will grow, he said that the potential for refugee flows is rapidly growing.

“We expect to see four billion inhabitants in Africa by the end of the century and now we have one billion. So the potential for refugees is rapidly growing and this is a matter of concern,” he said.

Talaas added that 2017 was a record breaking year in economic losses regarding climate disasters, and said that climate change brings more humidity, more rain, more tropical storms, and drought in other areas.

Filippo Giorgi from the International Center for Theoretical Physics said that the temperature in the Mediterranean region could rise by up to six degrees as a result of global warming. In the future, he said, summers in the region will be drier and hotter, while intensity of extreme events will go up.

“There are consistent indications of much drier and warmer climate conditions for the Mediterranean in the coming decades, especially during the warm seasons,” he added.

The conference is organised by the Cyprus Institute under the aegis of Anastasiades, with support from the European Commission in Cyprus.