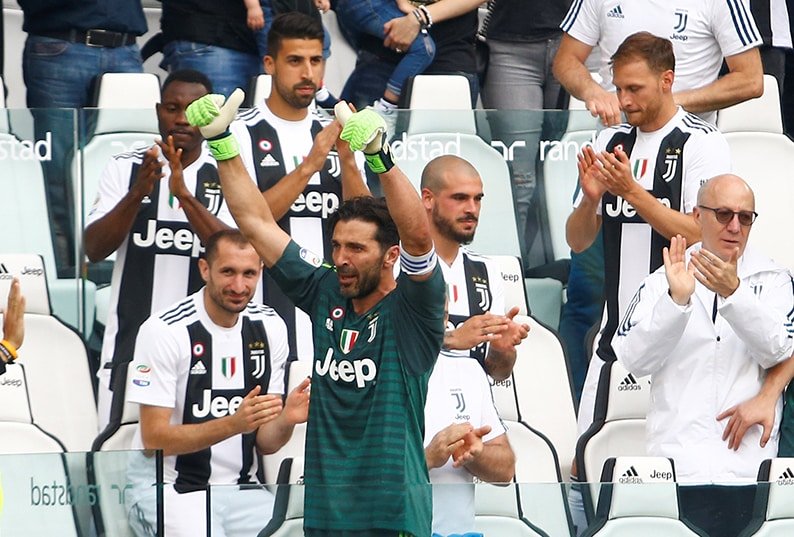 TALISMANIC goalkeeper Gianluigi Buffon bid a tearful farewell to Juventus after 17 seasons at the club when he played his last match for them in a 2-1 win over relegated Verona on Saturday.

The Turin side, who clinched their seventh consecutive Serie A title a week ago, were leading 2-0 when Buffon was substituted just after the hour in his 656th appearance for the club in all competitions.

The 2006 World Cup winner handed his captain’s armband to midfielder Claudio Marchisio then hugged several team mates and rival players as he left the field in tears to a standing ovation. He then walked around the perimeter, shaking hands with supporters in the front row.

Buffon, who won nine Serie A and four Coppa Italia titles with Juventus and had kept 300 clean sheets heading into Saturday’s match, was replaced by third-choice goalkeeper Carlo Pinsoglio, who made his first appearance for the club.

Buffon, who announced on Thursday that he would leave Juventus at the end of the season, had one save to make when he blocked a shot by Mohamed Fares in the first half.

Daniele Rugani put Juventus ahead four minutes after halftime from a rebound when Douglas Costa’s shot was parried by Verona goalkeeper Nicolas and Miralem Pjanic added a second from a free kick three minutes later.

Alessio Cerci scored a consolation for Verona in the 76th minute.

Full back Stephan Lichtsteiner, also playing his final match for Juventus after seven seasons at the club, had a penalty saved by Nicolas in the 85th minute.