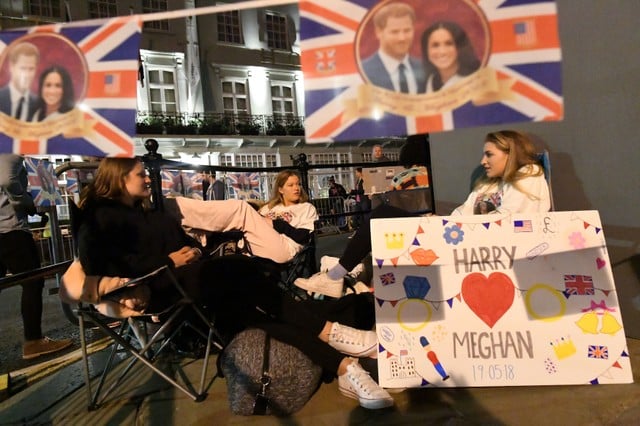 Fans of the royal family camped outside Windsor Castle

Crowds of well-wishers cheered Britain’s Prince Harry as he made an impromptu walkabout on Friday outside the ancient walls of Windsor Castle on the eve of his wedding to U.S. actress Meghan Markle.

One fan handed the prince a teddy bear during the 10-minute excursion before the brothers waved to the royal fans chanting “We want Harry!” and returned to the castle. They were due to spend the night in a luxury hotel nearby.

“I’m gobsmacked. He was so lovely. I can’t get over he shook our hands,” said Thelma Speed, 89.

Her daughter Deborah Goodes, 60, who named one of her sons after the prince, was equally smitten.

“I’ve seen him on the television, but in the flesh he looked really great,” she said. “I can see why she’s marrying him.”

The walkabout in open-necked shirts came as the last touches were put in place for the royal extravaganza at the castle, to the west of London and home to monarchs for almost 1,000 years.

Harry’s office announced that his father Prince Charles, the heir to the throne, would walk Markle down the aisle in place of her father.

Thomas Markle, pulled out days before the event, telling the celebrity website TMZ he was recovering from heart surgery, in a family drama that played out in the glare of media attention.

Buckingham Palace said Markle’s African-American mother, Doria Ragland, had met the 92-year-old queen and her husband Prince Philip, 96 on Friday. It also confirmed that Philip, who had hip replacement surgery last month, would be at the wedding.

Markle and her mother, a yoga instructor who a royal source said had charmed Prince Charles when they met during the week, arrived at a luxury hotel near Windsor where they were to spend the night before the wedding. Markle said she felt “wonderful”.

The well-wishers mingling with journalists and armed police were taking in the emotion as well as the pomp.

“Every daughter should have their dad but obviously he’s not very well. I do feel sorry for her. It must be heartbreaking for her,” said Moira Moss, who was camping outside the castle.

A former army officer and one-time royal wild child, Harry met Markle in July 2016 on a blind date set up through a mutual friend. Markle said she had known little about him while Harry said he had never heard of Markle or watched her TV series.

After just two dates, he whisked her off to Botswana for a holiday, camping under the stars.

After the schism of Brexit divided the United Kingdom and triggered a wave of doubt about its future place in the world, the glittering union of one of the most popular royals and an elegant U.S. divorcee may offer some distraction.

The British remain broadly supportive of the monarchy, albeit with a sense of mild irony about the pomp and pageantry that accompany it, though many have deep respect for the current monarch, Queen Elizabeth, after 66 years of dutiful service.

For some black Britons, the prospect of a mixed-race princess has increased interest in the monarchy, so far all white. The wedding address will be given by a black American bishop.

“Meghan will bring a new perspective to the royal family,” royal biographer Claudia Joseph said. “Obviously she comes from a very different background and … that’s hugely important to take the royal family into the future.”

This wedding has drawn comparisons with some remarkable episodes of recent royal history: Edward VIII’s relationship with American divorcee Wallis Simpson, which led him to abdicate in 1936, and the queen’s late sister Margaret’s decision to call off her marriage to an equerry, Peter Townsend.

But many Britons will not even watch the wedding, despite massive media interest.

Markle is expected to enter the chapel alone with her bridesmaids and page boys before joining Charles in the choir – the area where the clergy and choristers sit.

After the hour-long ceremony, the couple will process through Windsor’s ancient streets in an open 19th-century Ascot Landau carriage pulled by four Windsor Grey horses.

Police were expecting more than 100,000 people to throng the streets outside the castle – the queen’s home and the oldest and largest inhabited fortress in the world.

Harry, younger son of the late Princess Diana, has always been a popular member of the royal family.

At just 12 years old, he walked behind his mother’s coffin as her funeral cortege made its way through London after her death in a car crash in 1997.

He has spoken publicly about the pain of that loss, supported the cause of wounded veterans, and embraced campaigns for awareness about mental health.

“I remember Princess Diana dying,” said Nick Lemin, 45 who grew up in Windsor but now lives in Brisbane, Australia. “I think she’d be very, very proud of Prince Harry and the family and how they are living their lives.”

Windsor Castle was badly damaged by a fire in 1992, a year Elizabeth famously described as an “annus horribilis” after three of her four children’s marriages failed, including Charles’ marriage to Diana.

Fast-forward 26 years, and a reinvigorated royal brand has Windsor in party mood, ahead of an occasion forecast to be blessed with sunshine and blue skies

Under attack, police hit back