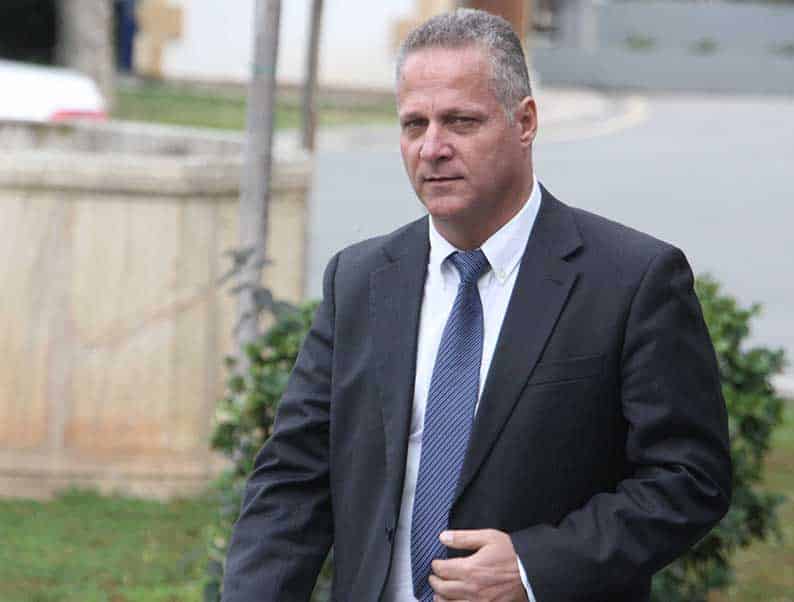 EDUCATION Minister, Costas Hambiaouris, found himself in the dog house on Saturday after both teachers and nurses lashed out on him for comments and actions they found to be “offensive and undermining”.

Primary school teachers’ union Poed said they would cut off all communication with Hambiaouris until the end of the school year, in protest over his “putting down” the teaching world.

Nurses also on Saturday called on him to apologise for his statements earlier in the week, which they said showed a lack of trust in their abilities.

The head of Poed, Fylios Fylaktou, said in a press conference that the union would discontinue any form of communication with the minister, except for issues of health and safety in schools, over his “daily putting down the teaching world”.

Poed was not happy by “distorted and contradicting” leaks to the press on the alleged attempt by its members to influence teaching staff at a school in Alethriko while testimonies were being taken concerning the accident involving a 10-year-old pupil last week during physical education. The boy died some hours later after being seen and sent home by two doctors who are now facing trial. Hambiaouris had ordered a probe into circumstances around the initial accident and a disciplinary probe against the teacher who was present at the time.

The general-secretary of Poed, Haris Charalambous, said that what the union wanted to do, was to meet with the school staff, a representative of the parents’ association, and psychologists from the education ministry to prepare the ground for the return to school on Monday of the pupils following the death of their schoolmate. Despite informing Hambiaouris of this, Charalambous said, they received a call on Monday from a ministry official on the instructions of the minister, forbidding them to go the school in question, because it would be considered interference with the investigation.

Charalambous said Hambiaouris did not respond to a text message he sent him on Monday informing him he and Fylaktou  did go to the school despite the minister telling them not to.

The message he then sent to Hambiaouris said: “If you want us to be in two separate camps and not one, it’s the easiest thing in the world. Both me and Fylios will leave school shortly because fortunately things are operating smoothly but we are incredibly annoyed by today’s attitude towards us. We are expecting a meeting as soon as possible”.

He said that following a telephone conversation later the same day, Hambiaouris told him he was annoyed by the message and that he had read it out loud during the cabinet meeting.

Following this, Poed decided to cut any form of communication with Hambiaouris and said they expected a reply to the letter they sent him.

If they do not receive a reply, Poed said they will decide next Friday as to how to handle it.

They also said they would report Hambiaouris to President Nicos Anastasiades for his “unacceptable accusations”, and also to European and international educational organisations.

The Cyprus Nurses and Midwives Association, in a 16-page open letter to Hambiaouris, said that they were shocked by the minister’s “invalidating, offensive attitude toward the nursing profession”, when he was called earlier in the week to discuss the prospect of the introduction of the school nurse in public schools.

The association cited Hambiaouris, as saying that “a nurse cannot judge by a single injury whether to call an ambulance or not”. This the group said, “clearly and unjustly deals a blow to the prestige of the nursing profession and clearly offends the university-level educational institutions of Cyprus and abroad that offer nursing education and produce nurses”.

If graduates of nursing department of universities could not assess a simple wound and distinguish it from something more serious, the group said, “then those universities ought to close down”.

But if nurses are not able to do that in school, the group said, then they cannot do that anywhere else, including special schools, hospitals, ambulances, A&Es, and health centres.

“Based on your rationale, all these health care providing spaces would have to close down, since in all these spaces a serious initial assessment of the health needs of the citizens is being made by nurses which contributes to the appropriate health decisions concerning treatment by the nurses themselves and / or other health professionals,” it said.

The association called on the minister to publicly recall his statement and apologise.

On Hambiaouris’ statement that it would not be possible to fill schools with nurses, the association, citing extensive academic literature, argues that the institution of the school nurse is an international best practice which has contributed greatly to the promotion of health and well-being of school children and of teachers.