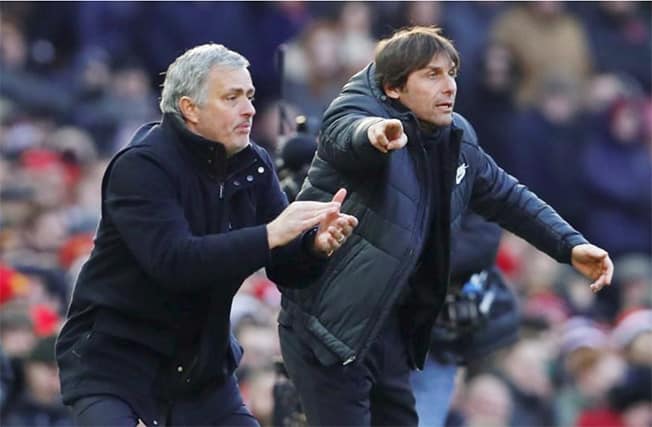 No love lost: few FA Cup finals have been as eagerly awaited as this season’s with both Jose Mourinho and Antonio Conte desperate to avoid the ignominy of ending the campaign without any silverware

Jose Mourinho’s relationship with Antonio Conte has been acrimonious since they took the hot seats at Manchester United and Chelsea respectively but the Portuguese can have the last laugh at Wembley on Saturday (7.15pm).

Few FA Cup finals have been as eagerly awaited as this season’s with both managers desperate to avoid the ignominy of ending the campaign without any silverware.

Mourinho did at least steer United to runners-up spot behind a peerless Manchester City in the Premier League but Conte’s Chelsea trailed in fifth and defeat in what is expected to be his final game in charge would be a bitter pill for the Italian.

Ever since Mourinho, Chelsea’s most successful manager, criticised Conte for his wild celebrations during Chelsea’s 4-0 rout of United in the early weeks of the 2016-17 season, the two have been trading insults, some more veiled than others.

Conte has criticised Mourinho’s spending at United and accused him of being obsessed with events at Stamford Bridge.

Mourinho upped the ante by labelling Conte’s touchline manner as clown-like and alluding to a match-fixing allegation Conte was eventually cleared of in Italy.

Conte in turn described Mourinho as a “little man” and “a fake”.

While things have cooled of late, there will be no love lost going into the climax of the domestic season on Saturday when United hope to join record-holders Arsenal with 13 FA Cup triumphs to their name.

Chelsea have not won the Cup since 2012 when Conte’s compatriot Roberto di Matteo was in charge.

Last season they were favourites going into the final having already won the Premier League in Conte’s first season in charge but fell flat, losing 2-1 to Arsenal.

No matter who is in charge of Chelsea next season, Spanish midfielder Cesc Fabregas said the only thing that counts now is to make sure the club ends a disappointing season on a high.

“We don’t have to think about next season, we need to win now, Saturday,” he said. “We can’t make (the season right) because the Champions League (qualification) is gone.

“But to finish on a high would be nice.”

Mourinho has not won the FA Cup since his first spell at Chelsea in 2007 — his only success in the competition.

While he would like nothing more than to lead United to victory against his old club, several of his players could also rub salt into Chelsea’s wounds too.

United’s Belgian striker Romelu Lukaku was deemed surplus to requirements by Chelsea but has flourished at United while midfielder Nemanja Matic was surprisingly allowed to join Mourinho at Old Trafford last season — a departure that seriously undermined Conte’s squad.

Lukaku is battling to shake off an ankle injury but is expected to be available for the final.

United’s progress under Mourinho has been impressive this season and they garnered 12 more points in the Premier League than they did in his first season.

However, last season Mourinho added the League Cup and Europa League title to the Old Trafford honours list, and midfielder Ander Herrera knows the club is defined by winning silverware.

“This club is about titles, about trophies, it’s about finals,” the Spaniard said.

“We will respect Chelsea, they are a top team and are used to winning as well. That makes the final even more difficult.”

While a feisty final is expected, both sets of players, managers and fans will unite to remember former Chelsea and United midfielder Ray Wilkins whose untimely death last month will be marked by a series of special tributes before kickoff.

Wilkins’ widow Jackie will present the trophy to the winners.

A century of Romanian song celebrated