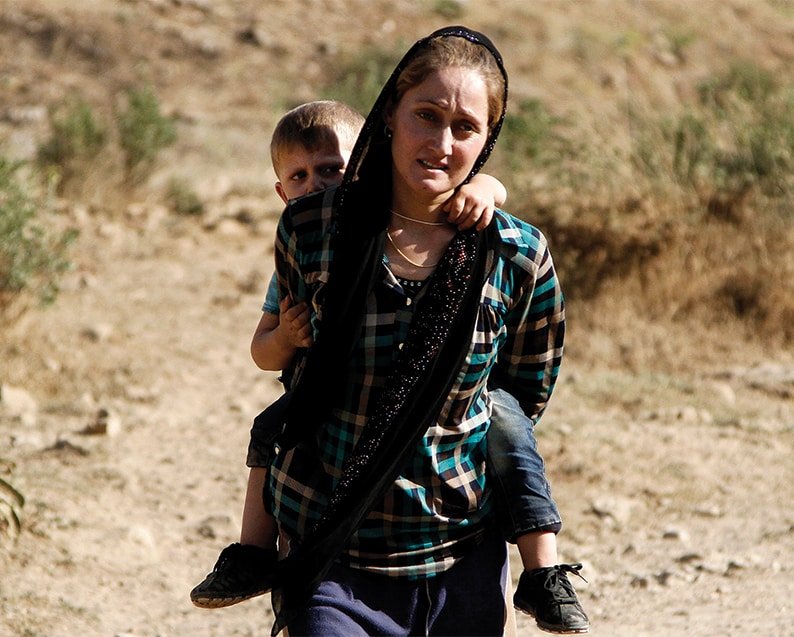 A Yazidi woman fleeing from Isis in Iraq in 2014

Modernity has done little to resolve an inherent contradiction within us all. Indeed it has exacerbated it

French President Emmanuel Macron, addressing the US Congress on April 25, 2018, embraced democracy’s values of political responsibility, inclusion, tolerance, equality and human rights to remind his audience that democracy itself, freedom and peaceful co-existence depend on them.

Ever since the Holocaust, when an estimated six million Jewish civilians and disarmed soldiers perished, the same values are reiterated at every opportunity. “Never again,” we are told, will the democratic world allow the recurrence of anything remotely similar to the Holocaust.

In addressing Holocaust survivors to mark International Holocaust Remembrance Day, January 27, 2018, the ex-US Secretary of State Rex Tillerson declared “…we can never, we can never, be indifferent to the face of evil.” But the truth of the matter is that in practice, such values have never been applied in a fair and consistent manner. If anything, they have been severely eroded and there is more inequality, conflict and oppression in the world today than has ever been. They have also played their part in promoting war, violence and trauma across the globe.

Historians, who once studied the Holocaust as a unique experience of “evil”, are now profusely expanding their investigations to a multiple of other similar calamities. As a reminder, 5.7 million non-Jewish Russian civilians were also mass murdered in the Holocaust; three million Russian prisoners; 1.8 million non-Jewish Polish civilians; plus close to one million Serbs, people with disabilities, Roma, Jehovah’s Witnesses and others.

Preceding the Holocaust, the Armenian genocide, 1915-1923, saw the systematic extermination of 1.5 million Armenian citizens by the Ottoman Empire. Following the Holocaust, we witnessed an accelerated proliferation of atrocities. For instance, in the Vietnam War 1955-1975, an estimated two million civilians were killed; 5.3 million injured and 11 million became refugees. In 1967-1970, more than one million civilians perished in the Nigerian-Biafra War. In Cambodia, in 1970-1987, four million (57 per cent of the country’s population) were massacred by successive governments. Half of those atrocities occurred under the Khmer Rouge in four years, 1975-1979. In 1994, the Rwandan genocide left up to a million dead in just four months.

Currently, in the seven years of the Syrian conflict it is estimated that one million people have lost their lives; over six million are internally displaced and five million have sought refuge abroad. In Iraq, one particular group, the Yazidi, has experienced barbaric violence in the hands of the self-proclaimed Islamic State (Isis). According to Professor Yan Ihan Kizilhan, 74 genocides have been carried out against the Yazidi in the last 800 years and 1.2 million have been massacred. Since 2014 over 500,000 Yazidi have fled as refugees. Over 7,000 have been killed. Nearly 6,000 girls have been abducted, raped and sold on Arab markets or executed.

The lesson from history is not that such savageness will never happen again but, rather, that there is an unfettered human capacity to invent and re-invent the wheel of destructiveness. Professor Timothy Snyder’s new book, The Road to Unfreedom, paints a bleak picture of the future. His answer to stopping the rot is a return to the democratic value of “political responsibility” that sees to injustices; and by promoting the good side and achievements of “civilisations”.

The problem with such a moral vision is how to translate it into a practical tool that is universally understood, accepted and applied. For humanity and destructiveness are not two separate and independent entities. They co-exist. They are intertwined and interconnected to make the human persona.

The ancient Romans represented this duality and symbiotic contradiction of human character by the God Janus whose face had two profiles: one side represented “good” and well-being and the other all that was “evil” and grotesque. Even when we consider that humans can exhibit civilised creativity, which has been demonstrated by the emergence of civilisations, the terrible truth is that those civilised achievements were accomplished by force and bloodshed.

Whether it was the Aztecs, Assyrians, Phoenicians, Persians, Romans, Greeks, Egyptians, Ottomans, Portuguese, British or others, their civilisations, culture and prominence were built on violence, economic and political domination and the suppression of other cultures.

Civilisations are an outcome of this symbiosis between “good” and “evil”. Greek mythology had a metaphor for it: “the Phoenix rising from the ashes”, meaning that out of destruction comes new life and development. In turn, with development come new levels and refined means of destructiveness. It is a cyclical regenerating and degenerating process.

The difference between past and present civilisations is that current “civilised” societies have mastered the art of human destructiveness by making it a more sophisticated and efficient killing machine. It spreads its horrors over a wider and broader geographical and social landscape. We have become, to borrow Jean-Jacques Rousseau’s description, “noble savages”.

There are shades and degrees of this inhumanity. But whether it is the daily loss of life from suicide bombers in Afghanistan who do not discriminate between children attending a religious school or a large group of adults patiently waiting to register at a polling station; or Israeli soldiers shooting down Palestinians under occupation and bragging about it; or children being gassed in Syria; or still in Syria and Iraq where foreign powers play dirty war games in the name of freedom and democracy and make tactical manoeuvres to ensure they have a share of the spoils; or when the Yazidi are massacred, raped and persecuted by Isis, it is still the same human aggression which expresses itself in different ways and by different people.

Whether destructiveness is done by subjecting individuals, groups or states to abuse and loss of dignity; or by creating unparalleled misery in the form of an unprecedented refugee problem; or killing with a knife or rifle or with “clinical” and tactical weapons it is still the same human violence exhibited in various forms.

Human destructiveness is not just about the loss of life, economic and social misery. It is also about the traumatic effects it leaves for generations to come. Psychological trauma can affect people and their descendants long after the original events – up to four generations. The diaspora of millions of traumatised people particularly children within and outside war zones can prove a destabilising factor for future social stability and civilisation.

Depression, feelings of loss, anger, envy, hate and revenge may turn survivors or their descendants into perpetrators of new violence to restore their “amour propre” and dignity; to challenge and change the “system”; and to exercise power and influence. So again we are locked in a perpetual cycle of regeneration and degeneration out of which civilisation cannot break free.

If past and present experiences are anything to go by, the prospects are not very promising.

We wuz robbed, so it’s next year in Tel Aviv

Here’s why maintaining the status quo is not an option