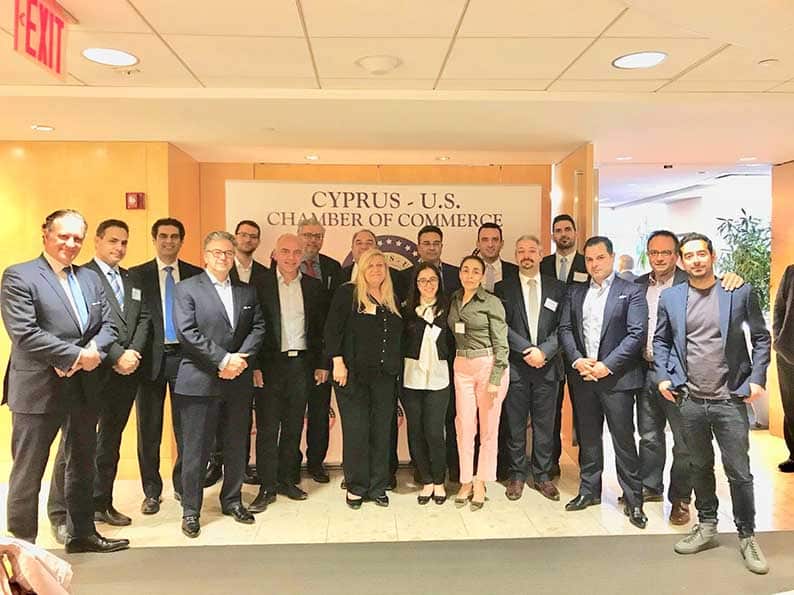 Six Cyprus-based companies with a focus on American expansion presented their vision to nearly 100 US investors and business leaders during the week in New York City.

The “Cyprus Realised” event was a partnership between the Cyprus-US Chamber of Commerce and Kinisis Ventures Limited, a business acceleration company founded by Cypriot ex pats.

The six companies also participated in a variety of follow-up private investor meetings and Cyprus-US Chamber of commerce events that further exposed them to numerous American businesses with expertise in each’s specific field during their week-long visit to New York.

The companies which participated were:

Chrysalis LEAP:  The Nicosia-based business accelerator was founded in 2013 to assist entrepreneurship and innovation in clean tech.  The company hosted the 2017 Climate Launchpad Global Grand Final which brought more than 100 startups from 35 countries to Cyprus and was won by Kenya’s Bio Alkanol which obtains liquid fuel from waste materials.

Coprime:  Founded in 2015, the company is headquartered in Limassol.  It has created a mobile business-to-business app for more than 70 wholesale companies in Cyprus and the U.K. and allows the commerce process to be quick and productive allowing for excellent customer satisfaction and repeat business.

NIPD Genetics:  Based in Nicosia, the company was founded in 2010 as a spin-off from the Cyprus Institute of Neurology and Genetics.  Its non-invasive testing can be more comfortable, effective and accurate in the diagnosis and management of genetic diseases. NIPD Genetics has accounts in 20 different countries.

Proto.io – The company’s flagship product, Proto.io, has revolutionised mobile app prototyping that allows businesses to test and validate their app ideas with cost-effective prototypes before development. Clients include Disney, Nickelodeon, and ESPN, and the US-based company with offices in Nicosia has more than 600,000 subscribers.

Stagedoor:  The company, which was founded in Nicosia, has transformed the London theatre experience and hopes to enter other major markets including New York City’s Broadway.  Their Stagedoor app has been downloaded nearly 25,000 times since its launch and allows theatre lovers to follow their favorite actors, directors, writers and venues.  The app allows users to write reviews and to receive show recommendations.

“The programme was excellent and there was great fit between start-up companies and representatives of prospective investors and investment companies,” said Philippos Patsalis, CEO of NIPD Genetics.  “It provided excellent opportunities not only for funding but with experienced investors who can add value to the company and U.S. expansion strategies.”

Giorgoudis travelled from Cyprus specifically to attend the event which directly aligned with one of his Agency’s mandate to help promote Cypriot technology and innovative startups.  “The US market is a very important market for us, and events like the one Kinisis Ventures helped organise are critically important to our agency’s initiatives”. “We are very pleased with the companies selected to represent Cyprus and also with the caliber of attendees that came to meet them” said Giorgoudis.

“It was a great event and an excellent selection of companies showcasing Cyprus’ diversity and potential to create global success stories,” said Stagedoor founder Michael Hadjijoseph. “Starting in Cyprus no longer means being limited to the Cypriot market. That has been the case for a long time and it’s time a lot more people start taking advantage of it.”

“Cypriot creativity and entrepreneurial prowess was clearly evident and the subsequent investor meetings leveraged the incredible strength of Kinisis Ventures’ network,” said Paris Thomas, Co-founder at Chrysalis LEAP. “We look forward to an ongoing collaboration with Kinisis Ventures as we enable more Cypriot startups to scale their businesses to the U.S., which will obviously impact the local economy.”

The reach of Kinisis Ventures in bringing the investment community to meet with the six firms was evident.

“We are very familiar with the members of Kinisis Ventures and their expertise in building, operating and selling businesses in the US, and we were very impressed with the caliber of Cypriot entrepreneurs and their companies.  We actually had follow up meetings with two of the companies the next day” said Edward Reitler, Managing Partner of the well-known venture and tech law firm Reitler Kailas & Rosenblatt LLC and co-founder of the venture fund Angel Round Capital.

“The Cyprus Realiaed event is an event that I would come back to and probably bring others with me” added Jonathan Bednarsh founder of Stella Advisors, a New York investor group.

“The presenters, and all of us with ties to Cyprus, have so much pride in the Cypriot ingenuity and entrepreneurism,” said Nicolas Nicolaou, president of the Cyprus–US Chamber of Commerce, a non-profit organisation dedicated to promoting trade and investment between the two countries.

“We followed strict criteria to select and bring these companies to New York, and were thrilled at the reception they received,” said Andreas Panayi, co-founder of Kinisis Ventures Limited.  “They made us and our Island proud and they took full advantage of the opportunity to attract investors.  We also were able to set up private meetings within our expat and U.S.-based network that may be pivotal to accelerating their growth in the U.S.”

“We work hard to provide Cypriot companies with exposure to the U.S. market and this event was another positive step,” added lawyer Yiannos Georgiades, a Kinisis Ventures co-founder who is based in Nicosia.

CYPRUS– US CHAMBER OF COMMERCE

Promoting gas as a catalyst to energy transformation