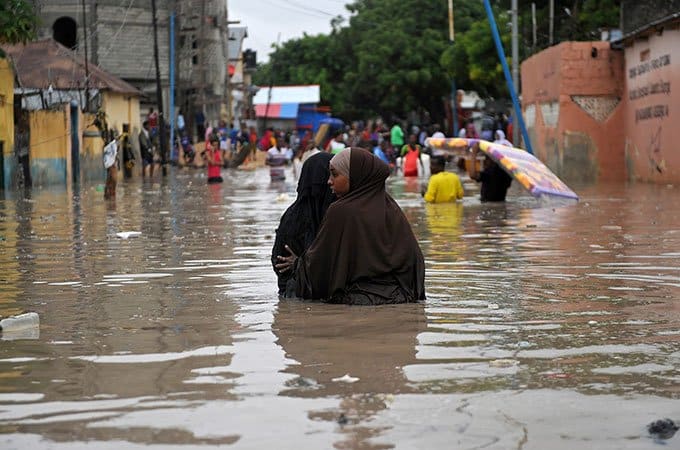 Heavy monsoon rains in Sri Lanka have killed five people, prompting authorities to warn against landslides and floods in low-lying areas after spill gates had to be opened across the Indian Ocean island.

Lightning killed three people, a landslide a fourth, and the fifth death was the result of a fallen tree, said officials at the country’s Disaster Management Centre.

The centre’s spokesman, Pradeep Kodippili, said flooding has forced the evacuation of people in areas where several rivers are overflowing, while four districts are on “red alert” for possible landslides.

“People in those four districts have been cautioned to be vigilant,” Kodippili told Reuters.

The army has sent more than 100 soldiers with more than 25 boats to tackle the emergency, its spokesman, Sumith Atapattu, told Reuters.

May kicks off the monsoon season in Sri Lanka’s south, usually the region’s wettest time of year, running until September. From November to February, the northwest monsoon also brings the island heavy rain.

Heavy rains and intermittent droughts have hit tea, the country’s main export crop, which brings in earnings of more than $1 billion. Tea output rose last year for the first time in four years.

However, the weather this year has not been harsh enough to affect the stockmarket and companies, brokers said, although firms in the plantation industry could be hit.

Growth in Sri Lanka hit a 16-year low of 3.1 percent in 2017, mainly due to a flood that killed more than 100 people and a lengthy drought in some areas.

Meanwhile at least 15 people have died in Somaliland after heavy rains caused by tropical cyclone Sagar which landed in the Horn of Africa over the weekend.

Situated at the northern tip of east Africa on the Gulf of Aden, Somaliland broke away from Somalia in 1991.

“In the last 24 hours, heavy stormy rains killed 15 people in the districts of Lughaya and Baki,” Abdirahman Ahmed Ali, governor of the Awdal area told reporters on Sunday.

“The Somaliland government has started giving emergency help to the victims.”

Meanwhile in Puntland, a semi-autonomous northeastern region of Somalia, storms caused by the cyclone took away two men and their car from a valley in the city of Bosaso, Yusuf Mohamed Waeys, the governor of Bari in Puntland told Reuters on Sunday.

The UN Office for the Coordination of Humanitarian Affairs said thousands of people have been affected by the flooding, displacement and the destruction of infrastructure in Sagar’s wake.

“The cyclone has worsened the humanitarian situation in the two states and disputed regions, which have experienced protracted drought dating back to 2015, leaving them particularly prone to flash flooding in the direct aftermath of massive downpours,” it said in a statement.

Puntland and Somaliland have been engaged in conflict over the disputed Sool region for more than 10 years. People who live there are divided over which side to back. Last week, dozens of people were killed in clashes between troops from the two sides.

“Due to the dispute over the regions of Sool and Sanaag and lack of access to some affected areas after the destruction of roads, the situation of affected populations and impediments caused by blocked roads and failed communications, the extent of the damage is yet to be fully confirmed,” the UN said.

Average maturity of government debt falls to 7 years in 2017