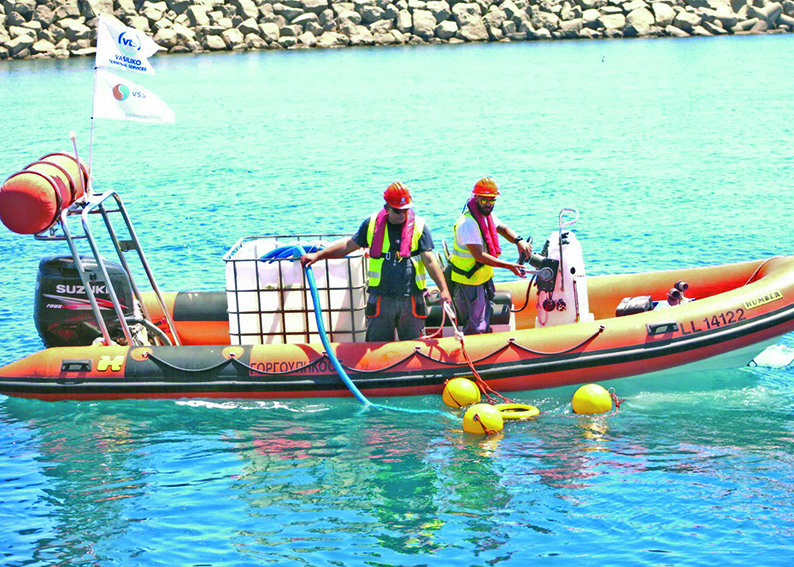 A VSS-EPE patrol vessel off the Limassol coast

Limassol mayor, Nicos Nicolaides, pledged to ensure a clean sea for his city on Monday, the first day sea patrols were launched to prevent and combat pollution.

Sea and land patrols are the new measure Limassol local authorities are taking to avoid recent incidents  when bathers complained of swimming in filthy waters and even of developing skin conditions.

The patrols will be carried out by vessels belonging to both private companies and the authorities.

The first patrol of the season started at 5.30am on Monday was carried out by a private vessel while two vessels, one belonging to the municipality, the other to the fisheries department, will also patrol the waters daily.

The patrols will be in force between May and September.

A land patrol along the coastal road will also be carried out to clamp down on pollution within bathing areas.

At the same time, Nicolaides said, state services will take measures such as carrying out checks in the wastewater treatment systems of ships anchored at Limassol port, and ensure the strict application of the procedure for sewage collection from ships and their delivery to the new reservoirs of the Cyprus Port Authority and from there to the Limassol sewerage board’s system. There will also be increased monitoring of vessels organising tours both during their departure and return to the old harbour and marinas.

The mayor said that the municipality would carry out immediate microbiological testing if pollution is spotted in the sea.

“We want to thank lifeguards and winter swimmers’ organisations and bathers for their cooperation in forming a network of providing timely information to the relevant services,” he said.

“We will not stop our efforts for our city to have a beautiful and clean sea to be enjoyed both by Limassolians and visitors,” Nicolaides said.

Mayor of Yermasoyia, Kyriacos Xydias, and community leader of Ayios Tychonas, Pambos Ioannou, said that this would not have been possible without cooperation of local authorities and state services.

Meanwhile, winter swimmers’ group ‘Akti Olympion’ said following the announcement of the new measure that they would postpone filing a complaint to the European Commission raising the pollution of the Limassol sea.

Even though they had collected 2,000 signatures to launch a formal complaint with competent European institutions, they said they decided to allow some time for the implementation of the new measures.

The Limassol municipality announced that the 24-hour hotline for issues of sea pollution is up and running. The telephone number to report incidents is 25 884 590.